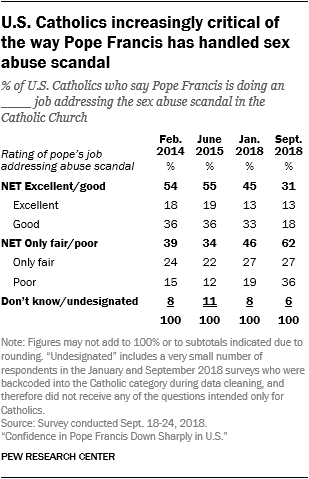 As allegations and investigations of sex abuse in the Catholic Church become more widespread, a new Pew Research Center survey finds that confidence in the way Pope Francis is handling the crisis has plummeted among U.S. Catholics. Just three-in-ten Catholic adults say Francis is doing an “excellent” or a “good” job addressing the issue, which is down 24 points since 2015 and 14 points from when Pew Research Center last asked the question in January of this year.

While seven-in-ten American Catholics say their overall opinion of Pope Francis is favorable, six-in-ten now say he is doing an “only fair” or “poor” job handling the sex abuse scandal, including 36% who say his efforts on this front have been poor. This is nearly double the share who said he was doing a poor job at the beginning of this year, and triple the share who said this in 2015. 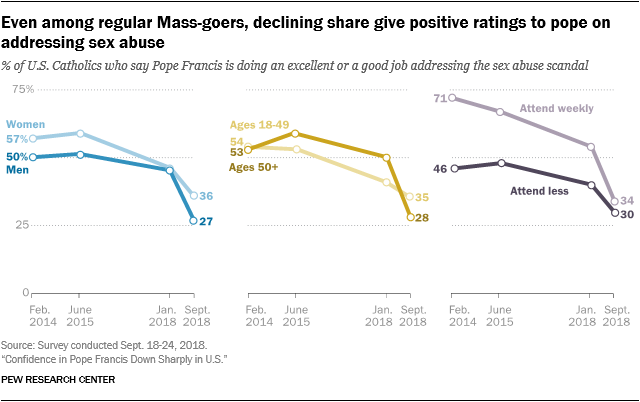 When asked about their overall opinion of Pope Francis, roughly seven-in-ten U.S. Catholics now say they have a favorable opinion of the pontiff, down 12 points since the beginning of the year. The decline is especially evident in the share of American Catholics who say they have a very favorable opinion of the pope, which now stands at 30%. By comparison, previous Pew Research Center surveys have generally found that four-in-ten or more Catholics (and as many as 62% in October 2015) hold Francis in the highest regard.

These are among the key findings of a new national survey by Pew Research Center, conducted Sept. 18 to 24 among 1,754 adults, including 336 Catholics. Among the U.S. public as a whole (including both Catholics and non-Catholics), roughly half say they have a favorable view of Pope Francis, which is the lowest rating he has received in nine Pew Research Center surveys that have asked about Pope Francis since the beginning of his pontificate in 2013. 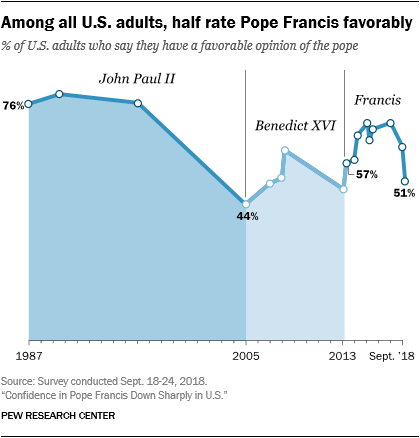 In surveys conducted between 1987 and 1996, John Paul II was viewed positively by a larger share of Americans than have ever viewed either Benedict XVI or Francis positively. However, Pew Research Center polling did not include questions about John Paul II after news of sex abuse in the church made national headlines in 2002.

In addition to asking about the pope’s handling of the sex abuse scandal, the survey also asked Catholics to rate the way Pope Francis is handling his job in three other areas: appointing new bishops and cardinals, spreading the Catholic faith, and standing up for traditional moral values. On all three issues, evaluations of the pope have grown sharply more negative this year.

For instance, U.S. Catholics are now evenly divided between those who give Francis positive ratings for the job he has done appointing new bishops and cardinals and those who give him negative marks in this area. In January, by contrast, the balance of opinion on this question tilted heavily in the pope’s favor.

And while the pontiff is still rated more positively than negatively for the job he has done spreading the Catholic faith and standing up for traditional moral values, the share of Catholics who say Francis is doing an excellent or a good job on these fronts also has declined sharply in recent months. 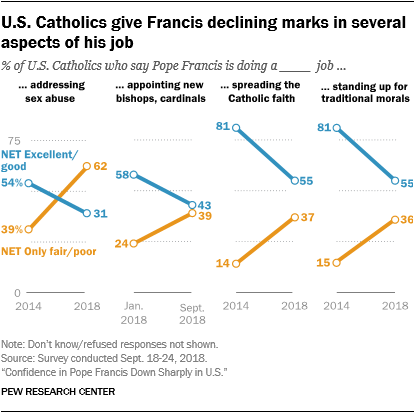 It is possible that respondents could link any of these areas to the sex abuse scandal. For example, Francis recently admitted that rather than spreading the Catholic faith, the scandal is driving Catholics away from the faith. In addition, the church has been criticized for elevating bishops and cardinals despite warnings that they were alleged abusers. 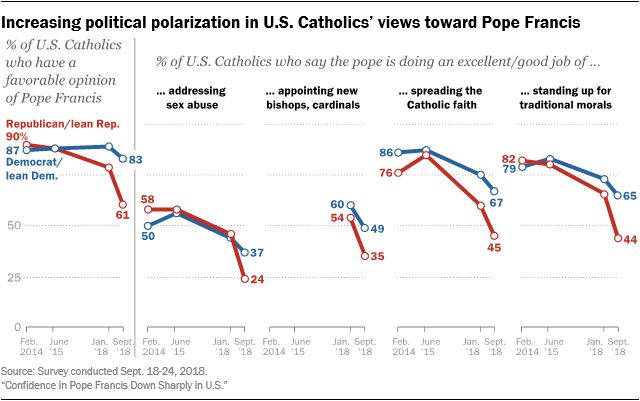 While most Catholics (and majorities within every Catholic subgroup analyzed in the survey) rate Pope Francis at least “mostly” favorably, the share who hold him in the highest esteem is shrinking. Just three-in-ten U.S. Catholics now say they have a “very favorable” opinion of Francis, which is down from 45% who said the same earlier this year and merely half as large as the share who had a “very favorable” view of the pope in the immediate wake of his visit to the U.S. in October 2015 (62%). 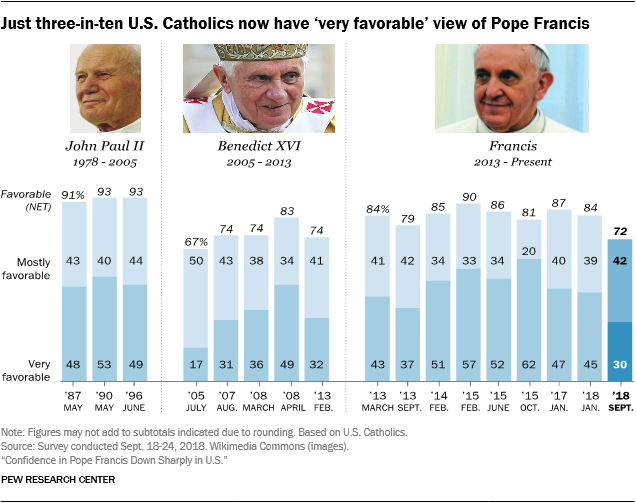 These cooler feelings toward Francis are evident across many Catholic subgroups. Among Catholic men, for example, the share who say they have a “very” favorable view of Pope Francis has dropped 20 points in the past nine months. Even among Catholics who attend Mass at least once a week, just a third (34%) now say they have a very favorable opinion of the pontiff, down from 56% in January. And Catholic Democrats, who still broadly see Francis favorably, also are less likely now to say their opinion is “very” favorable than they were earlier this year (34% vs. 49% in January 2018). 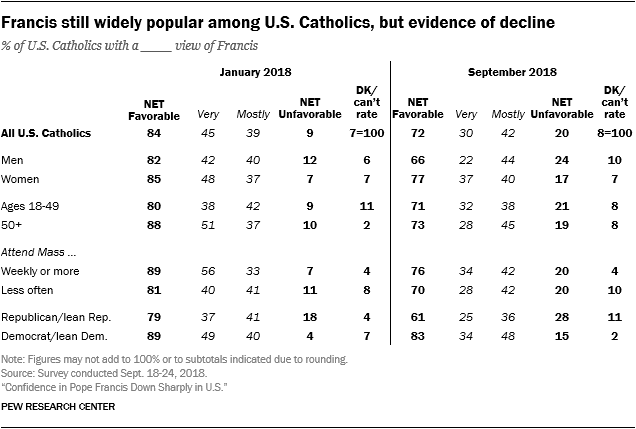 The survey also shows that American Catholics are not alone in their shifting opinion of Pope Francis. Just a third (32%) of white evangelical Protestants hold a positive view of the pope, down from 52% who said the same in January. And there has been a similar decline in Francis’ popularity among white mainline Protestants: 67% viewed him favorably in January, compared with 48% today. Among religiously unaffiliated adults, roughly half view Francis favorably, relatively unchanged from earlier this year – but down 18 points since January 2017. 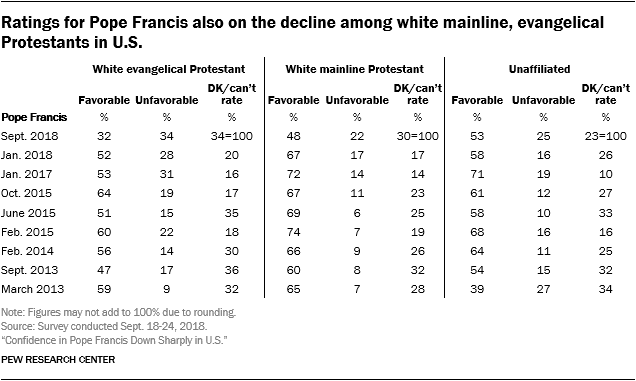 Generally, Catholics who attend Mass regularly have been more supportive of the pontiff than have those who do not attend Mass regularly. But ratings of Pope Francis have declined across the board. And today, weekly Mass-attending Catholics are no more likely than Catholics who attend less often to say that Francis is doing an adequate job handling the sex abuse crisis or standing up for traditional moral values. Similarly, declines in U.S. Catholics’ ratings of Pope Francis when it comes to appointing bishops and cardinals or spreading the Catholic faith have occurred across a variety of Catholic subgroups. 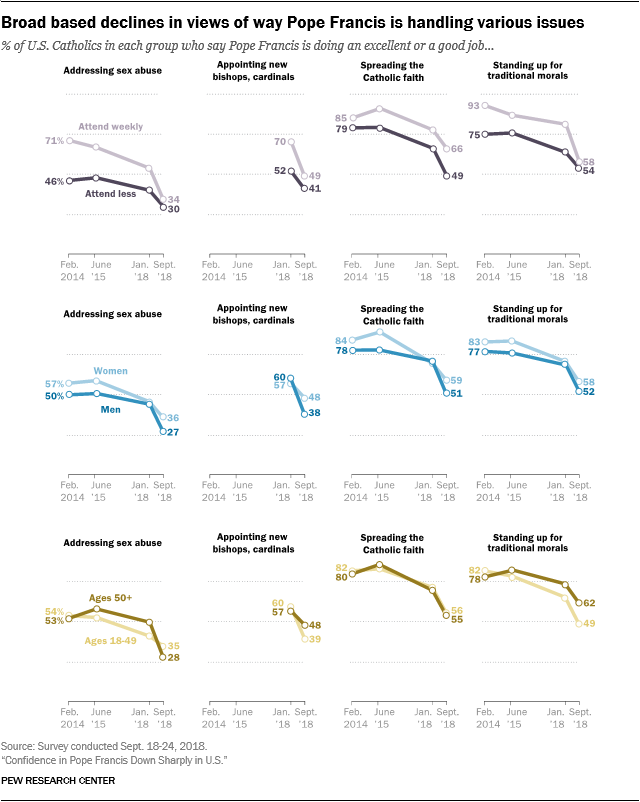 Confidence in Pope Francis Down Sharply in U.S.
Declining shares of Catholics and non-Catholics view Francis in a positive lightBroad-based declines in U.S. Catholics’ views of how Pope Francis is handling sex abuse scandal, other issues
Acknowledgements Methodology