About half of U.S. adults have looked for a new religious congregation at some point in their lives, most commonly because they have moved. And when they search for a new house of worship, a new Pew Research Center study shows, Americans look first and foremost for a place where they like the preaching and the tone set by the congregation’s leaders.

Fully 83% of Americans who have looked for a new place of worship say the quality of preaching played an important role in their choice of congregation. Nearly as many say it was important to feel welcomed by clergy and lay leaders, and about three-quarters say the style of worship services influenced their decision about which congregation to join. Location also factored prominently in many people’s choice of congregation, with seven-in-ten saying it was an important factor. Smaller numbers cite the quality of children’s programs, having friends or family in the congregation or the availability of volunteering opportunities as key to their decision.

Perhaps as a result of the value they place on good sermons, church leadership and the style of worship services, many people – even in this age of technology – find there is no substitute for face-to-face interaction when seeking information about a new religious home. Fully 85% of those who have looked for a new house of worship say they attended worship services at a church they were considering, and seven-in-ten say they spoke with members of the congregation or to friends or colleagues about their decision. Looking for information online may be growing more common, especially among young people and those who have looked for a congregation recently. But online information still appears to be far less important to potential congregants than experiencing the atmosphere of the congregation firsthand.

The single most common reason people give for having looked for a new congregation is that they moved: Roughly one-third of adults say they have searched for a new place of worship because they relocated. By comparison, fewer people say they sought a new congregation because of a disagreement with clergy or other members at their previous house of worship (11%) or because they got married or divorced (11%). About one-in-five adults (19%) volunteered that they have looked for a new congregation for some other reason, including other problems with a previous church, changes in their own beliefs or for social or practical reasons. 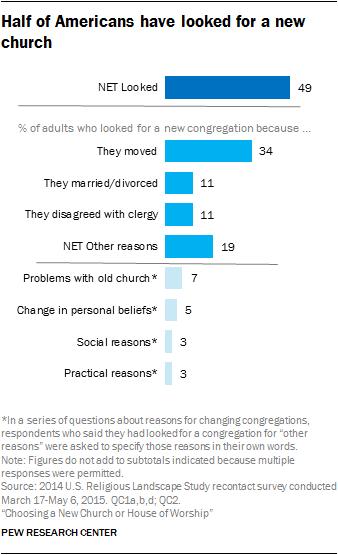 These are some of the key findings from the fourth in a series of reports based on Pew Research Center’s U.S. Religious Landscape Study. The study and this report were made possible by The Pew Charitable Trusts, which received support for the project from Lilly Endowment Inc. The first report on the 2014 Landscape Study, based on a telephone survey of more than 35,000 adults, examined the changing religious composition of the U.S. public and documented the fluidity of religion in the U.S., where roughly one-third of adults now have a religious identity different from the one in which they were raised. The second report described the religious beliefs, practices and experiences of Americans, as well the social and political views of different religious groups. A third report drew on both the national telephone survey and a supplemental survey of participants in Pew Research Center’s American Trends Panel to describe how Americans live out their religion in their everyday lives.

This fourth report also draws on the national telephone survey, but it relies primarily on questions asked in a follow-up (“recontact”) survey of respondents who originally participated in the national telephone poll. It explores the fluidity and dynamism in U.S. religion in more detail by documenting when, how and why Americans search for new congregations. It shows that about half of adults who have searched for a new congregation at some point in their lives considered changing denominations while they were searching. And it finds that many Americans say their own level of religious engagement has ebbed and flowed over the course of their adult lives.

Many of those whose religious attendance has become more frequent cite a change in their beliefs as the main reason, saying their increased attendance reflects the fact that they have become more religious or felt a need for God or religion in their lives. By contrast, among those whose attendance has waned, the most commonly offered reasons have to do with practical concerns, including many who say they are too busy to attend or cite other practical difficulties with getting to a church, synagogue, mosque or other house of worship, depending on their religion.2

Next: 1. The search for a new congregation
← Prev Page
You are reading page1Page2Page3Page4Page5
Next Page →

Choosing a New Church or House of Worship
1. The search for a new congregation 2. Religious attendance fluid for many Americans Acknowledgments Methodology