11/2/16: This report has been revised to include updated data in categorizing white Protestants into the “white evangelical Protestant” and “white mainline Protestant” categories. Originally, the report relied partly on data from a previous wave of the American Trends Panel to make these categorizations. 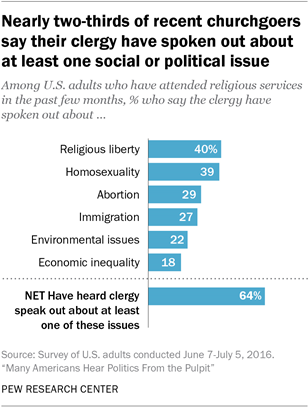 As the calendar turned from spring to summer and the political season transitioned from the primaries to the general election campaign, many American churchgoers were hearing at least some discussion of social and political issues from the pulpits at their houses of worship, a new Pew Research Center survey finds. Religious liberty and homosexuality were chief among the issues they were hearing about, with four-in-ten saying they heard from clergy on each of these topics during the spring and early summer. Roughly three-in-ten say their clergy talked about abortion, similar to the share who heard about immigration. And one-in-five churchgoers reported hearing about the environment and economic inequality.

In the new survey, conducted online and by mail June 5-July 7 among a nationally representative sample of 4,602 adults, 40% of Americans reported attending religious services at least once or twice in the few months before the poll was conducted. Within this group, about two-thirds (64%) say they heard clergy at their church or other place of worship speak about at least one of the six social and political issues mentioned in the survey, with nearly half (46%) indicating that religious leaders had spoken out on multiple issues.

Fewer recent churchgoers (14%) say they heard their clergy speak directly in support of or against a specific presidential candidate in the months leading up to the survey. Black Protestants were particularly likely to hear this type of message: Among black Protestants who have been in church recently, roughly three-in-ten (29%) have heard clergy speak out in support of a candidate – mostly Hillary Clinton – and an equal share have heard religious leaders speak out against a candidate (primarily Donald Trump). Smaller shares of Catholic, white evangelical Protestant and white mainline Protestant churchgoers – roughly one-in-ten or fewer – say their clergy have publicly supported or opposed particular candidates. 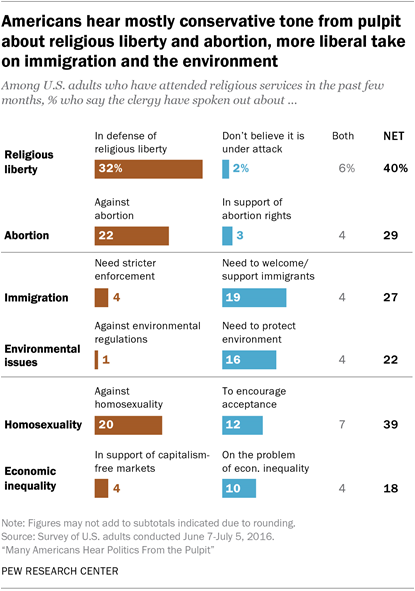 When it comes to specific political issues, the ideological tenor of messages emanating from pulpits varies by topic. About three-in-ten people who recently attended religious services say they heard clergy speak out in defense of religious liberty – a position mainly associated with political conservatives in the U.S. in recent years – while just 2% say their clergy contended that religious liberty is not really under attack (although 6% say they heard both messages). Recent churchgoers also have heard a more conservative perspective on abortion; 22% say they have heard religious leaders speak out against abortion and just 3% have heard clergy argue primarily in support of abortion rights.

By contrast, Americans report hearing mainly traditionally liberal ideas in their houses of worship about immigration and the environment. Roughly one-in-five of those who have attended religious services recently say their clergy have spoken out about the need to be welcoming and supportive toward immigrants, compared with just 4% whose clergy have expressed a desire mainly for stricter immigration enforcement. And while 16% say religious leaders have spoken out in favor of protecting the environment, just 1% say they have heard their clergy speak out only against environmental regulations. 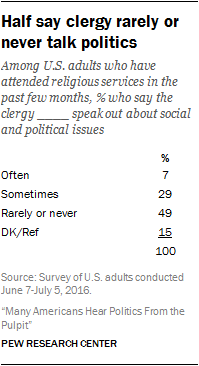 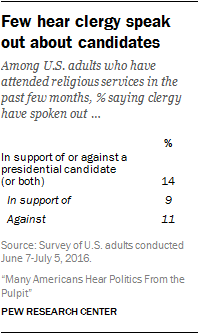 Most people surveyed say political speech is the exception, not the rule, in their churches, synagogues, mosques or other houses of worship. Indeed, more than three-quarters of those who attended religious services in the months leading up to the survey say their clergy discussed social and political issues only sometimes, rarely or never. Just 7% say their clergy “often” speak out on social and political issues. Furthermore, the U.S. Internal Revenue Code places limits on the political activities of tax-exempt nonprofit organizations, including churches; they are prohibited from coming out in favor of one candidate over another (though not from discussing political issues) if they wish to retain their tax-exempt status.

Still, some Americans – 14% of those who attended religious services in the spring and early summer – say their clergy have spoken out in support of, or in opposition to, one of the presidential candidates during this campaign season. One-in-ten (9%) say they have heard clergy speak out in support of a candidate, including 6% who say they heard support for Hillary Clinton and 1% who heard support for Donald Trump. A similar share of churchgoers (11%) say they have heard religious leaders speak out against a candidate, including 7% who say their clergy have come out in opposition to Trump and 4% who have heard opposition to Clinton. These figures include some people (6%) who have heard both types of arguments.

Compared with other groups, black Protestant churchgoers report hearing more direct talk about candidates from church leaders. They have heard much more support for Clinton (28%) than for Trump (2%) and have heard clergy speak out against Trump (20%) more often than against Clinton (7%). Smaller shares of white evangelical Protestant churchgoers report hearing their clergy speak out in support of (4%) or against (7%) specific candidates, and the message is more mixed; for instance, 2% have heard clergy speak out against Trump and 2% say clergy spoke out in support of him.

The issues and messages that churchgoers hear about during services vary somewhat by religious tradition.1 White evangelical Protestants who have attended services in recent months are particularly likely to say they have heard clergy address the issue of religious liberty. About half (49%) have heard their clergy speak out about this topic, compared with roughly four-in-ten Catholic churchgoers (38%) and about a third of mainline Protestants (36%) and black Protestants (32%).2

White evangelicals and Catholics are more likely than white mainline and black Protestants to have recently heard clergy speak out against abortion. For both groups, the message is consistently conservative. A third of white evangelical churchgoers and roughly three-in-ten Catholics who have attended Mass recently say they have heard religious leaders argue against abortion, while very few (1% and 2%, respectively) have heard clergy speak in support of abortion rights.

While Catholics report hearing mostly conservative messages from the pulpit on the issues of religious liberty and abortion, they tend to hear more liberal messages about immigration and the environment. About a third of Catholic churchgoers have heard clergy speak out about the need to be welcoming and supportive of immigrants in recent months, compared with only 3% who heard clergy talk solely about a need for stricter immigration enforcement. And about a quarter of Catholics heard church leaders talk about the need to protect the environment, while fewer than 1% heard a message primarily against environmental regulations. 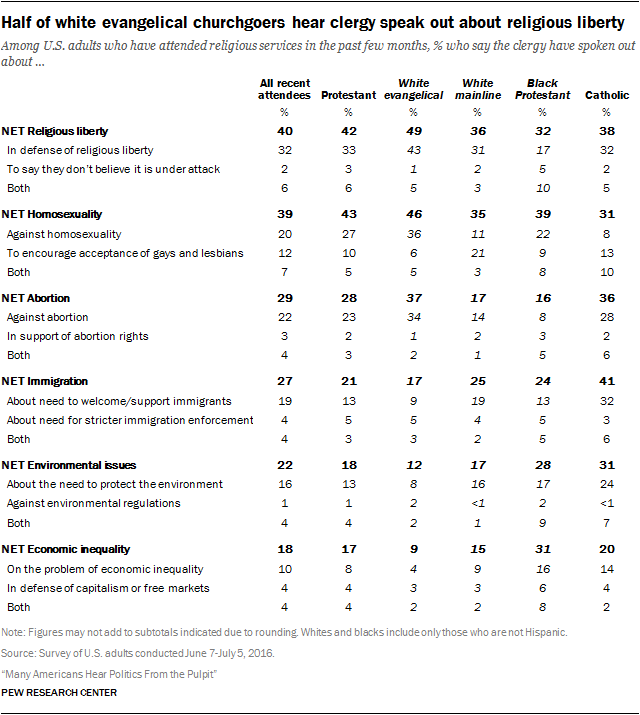 When given the chance to name any other political or social issues that clergy have spoken out about in recent months (aside from those the survey mentioned directly), most Americans who have attended religious services recently (81%) did not name any additional topics. Among those who did, a wide variety of issues were mentioned, including 5% who mentioned social welfare issues such as LGBT issues, topics having to do with poverty, hunger or homelessness, or equal rights or anti-discrimination. Another 4% mentioned topics having to do with religious and moral issues, such as acceptance and tolerance more generally, and a similar share (4%) mentioned a variety of political or policy issues like the upcoming presidential election, terrorism or foreign policy.3

Churches and the 2016 campaign: Many say their clergy encourage voting, but not necessarily for a particular candidate

Among U.S. adults who have attended religious services at least once or twice in recent months, about a third (32%) say the clergy at their place of worship encouraged people in the congregation to vote in a primary or participate in a caucus, and four-in-ten say religious leaders have encouraged congregants to vote in the general election for president.

While many churchgoers have heard their clergy encouraging people to go out and vote, only about one-in-ten say they have heard direct support for (9%) or opposition to (11%) a specific candidate. Among those who have heard religious leaders speak out for a candidate, Hillary Clinton is the name mentioned most often, with 6% of recent churchgoers saying their clergy have spoken out in support of her in the past few months. Donald Trump’s name is most commonly mentioned among those who have heard clergy speak out against a particular candidate; 7% have heard him mentioned in this context.

Many Americans Hear Politics From the Pulpit
Religious liberty, homosexuality among issues addressed by clergyChurches and the 2016 campaign: Many say their clergy encourage voting, but not necessarily for a particular candidate
Acknowledgments Methodology