In their attitudes toward modern society and their relations with people of other faiths, U.S. Muslims sometimes more closely resemble other Americans than they do Muslims around the world. 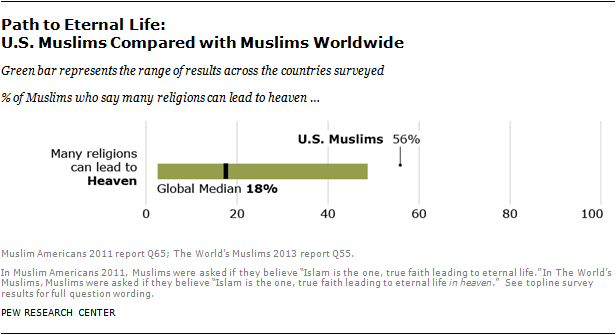 Most U.S. Muslims (63%) say there is no inherent tension between being devout and living in a modern society. A nearly identical proportion of American Christians (64%) agree. Around the world, somewhat fewer Muslims (global median of 54%) share the view that modern life and religious devotion are not at odds.

The picture is more complicated when it comes to matters of science and religion. Roughly six-in-ten U.S. Muslims (59%) say there is generally no conflict between science and religion. Globally, about half of Muslims (median of 54%) agree. But among U.S. Christians (39%) and the U.S. general public (37%) smaller shares view religion and science as generally compatible. On the question of evolution, U.S. Muslims are split: 45% believe humans and other living things have evolved over time, while 44% disagree. U.S. Muslims are about as likely to believe in evolution as U.S. Christians (46% of whom say they believe in evolution). But Americans overall (52%) as well as Muslims worldwide (median of 53%) lean more clearly toward accepting evolution. 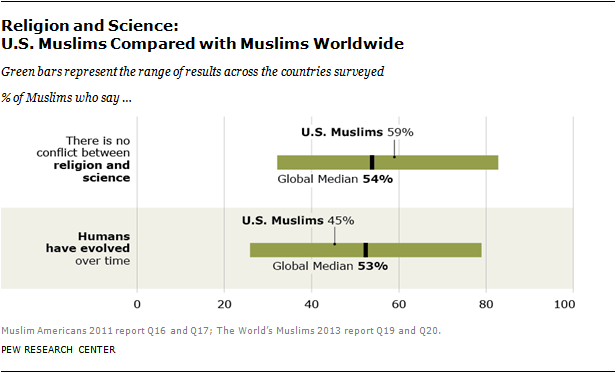 More than eight-in-ten American Muslims say suicide bombings and other forms of violence against civilian targets are never justified (81%) or rarely justified (5%) to defend Islam from its enemies. Worldwide, most Muslims also reject this type of violence, with a median of 72% saying such attacks are never justified and 10% saying they are rarely justified. Just 1% of U.S. Muslims and a median of 3% of Muslims worldwide say suicide bombings and other violence against civilian targets are often justified, while 7% of U.S. Muslims and a global median of 8% of Muslims say such attacks are sometimes justified to defend Islam.

Next: Appendix B: Glossary
← Prev Page
Page4Page5Page6Page7Page8Page9Page10You are reading page11Page12Page13Page14
Next Page →