When determining the order of questions within the questionnaire, surveyors must be attentive to how questions early in a questionnaire may have unintended effects on how respondents answer subsequent questions. Researchers have demonstrated that the order in which questions are asked can influence how people respond; earlier questions – in particular those directly preceding other questions – can provide context for the questions that follow (these effects are called “order effects”).

For closed-ended opinion questions, there are two main types of order effects: contrast effects, where the order results in greater differences in responses, and assimilation effects, where responses are more similar as a result of their order. 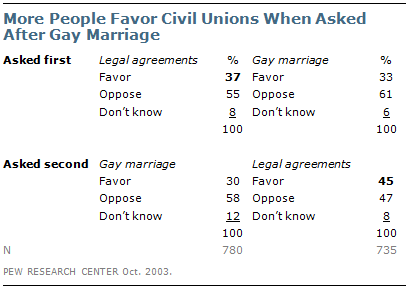 An example of a contrast effect can be seen in a Pew Research poll conducted in October 2003 that found that people were more likely to favor allowing gays and lesbians to enter into legal agreements that give them the same rights as married couples when this question was asked after one about whether they favored or opposed allowing gays and lesbians to marry (45% favored legal agreements when asked after the marriage question, but 37% favored legal agreements without the immediate preceding context of a question about gay marriage). Responses to the question about gay marriage, meanwhile, were not significantly affected by its placement before or after the legal agreements question. 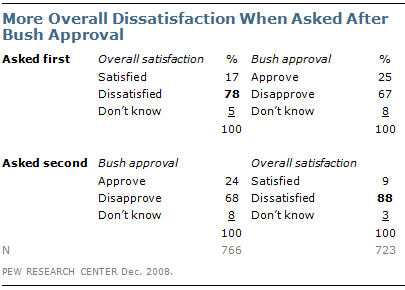 Another experiment embedded in a December 2008 Pew Research poll also resulted in a contrast effect. When people were asked: “All in all, are you satisfied or dissatisfied with the way things are going in this country today?” immediately after having been asked “Do you approve or disapprove of the way George W. Bush is handling his job as president?” 88% said they were dissatisfied compared with only 78% without the context of the prior question. Responses to presidential approval remained relatively unchanged whether national satisfaction was asked before or after it. A similar finding occurred in December 2004 when both satisfaction and presidential approval were much higher (57% were dissatisfied when Bush approval was asked first vs. 51% when general satisfaction was asked first). 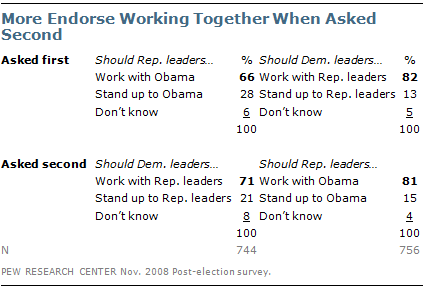 The order questions are asked is of particular importance when tracking trends over time. As a result, care should be taken to ensure that the context is similar each time a question is asked. Modifying he context of the question could call into question any observed changes over time (see Measuring change over time for more information).

A questionnaire, like a conversation, should be grouped by topic and unfold in a logical order. It is often helpful to begin the survey with simple questions that respondents will find interesting and engaging to help establish rapport and motivate them to continue to participate in the survey. Throughout the survey, an effort should be made to keep the survey interesting and not overburden respondents with several difficult questions right after one another. Demographic questions such as income, education or age should not be asked near the beginning of a survey unless they are needed to determine eligibility for the survey or for routing respondents through particular sections of the questionnaire. Even then, it is best to precede such items with more interesting and engaging questions.