The demographic profile of voters has changed in important ways over the past two decades. Overall, the electorate is getting older, and this is seen more among Republican voters than among Democrats. 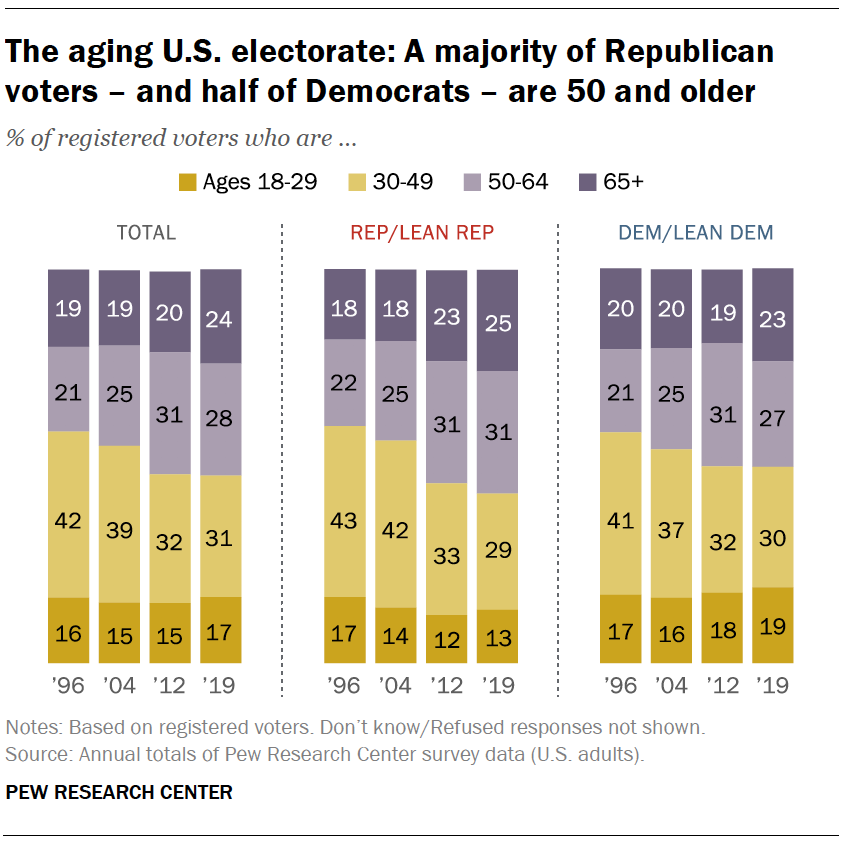 In addition, the electorate, like the U.S. population, has become much more racially and ethnically diverse. This shift is reflected much more in the demographic profile of Democratic voters than among Republicans.

The shares of both parties’ voters who are ages 50 and older have increased over the past two decades.

However, while a majority of Republican and Republican-leaning registered voters are ages 50 and older (56%), a smaller share of Democratic and Democratic-leaning voters are in that age group (50%). In 1996, the age composition of the two parties looked more similar. Roughly four-in-ten voters in both parties were at least 50 years old (41% of Democrats, 39% of Republicans). 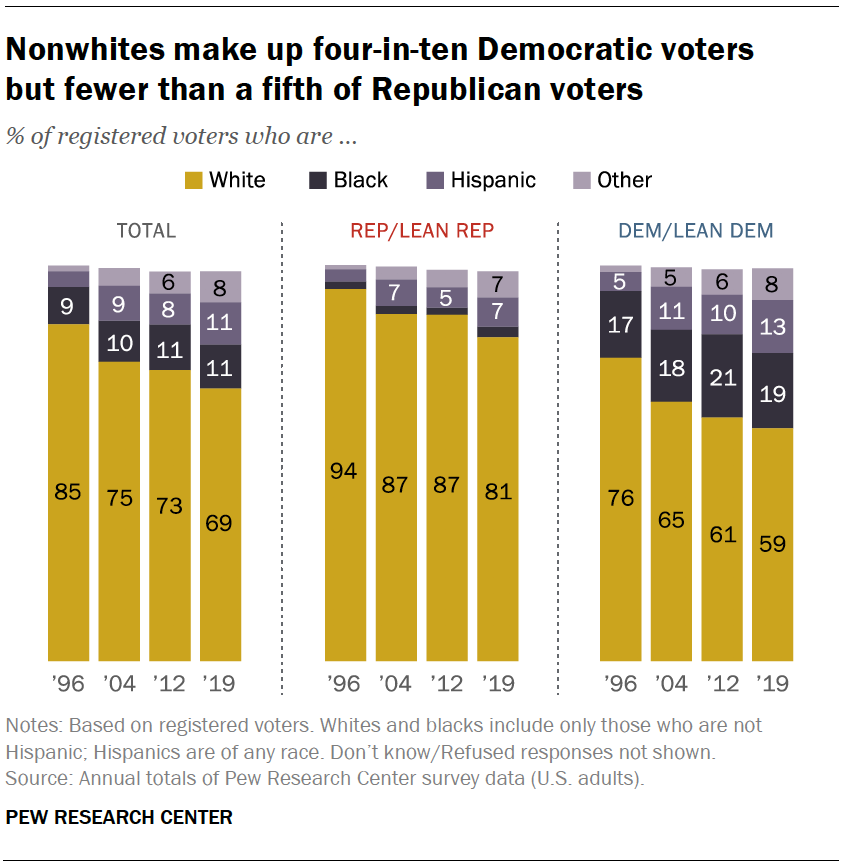 Non-Hispanic white voters make up a steadily decreasing share of the electorate. In 1996, white non-Hispanics constituted an overwhelming majority (85%) of registered voters. Today, 69% of voters are non-Hispanic white. Over this period, the share of voters who are black, Hispanic or another race has risen from 15% to 30%.

The growing racial and ethnic diversity has changed the composition of both parties, but the change has been starker among Democrats.

While white registered voters make up a majority of the Democratic Party, their share has declined. In 1996, white voters constituted 76% of all Democratic and Democratic-leaning voters; today, they make up 59%. Four-in-ten Democratic voters are nonwhite, an increase from nearly one-in-four in 1996.

An overwhelming majority of Republican and Republican-leaning voters continue to be white. Today, whites make up roughly eight-in-ten (81%) Republican voters, down from 94% in 1996. Still, the share of nonwhite voters in the Republican Party has more than doubled in that time (6% in 1996, 17% in 2019). 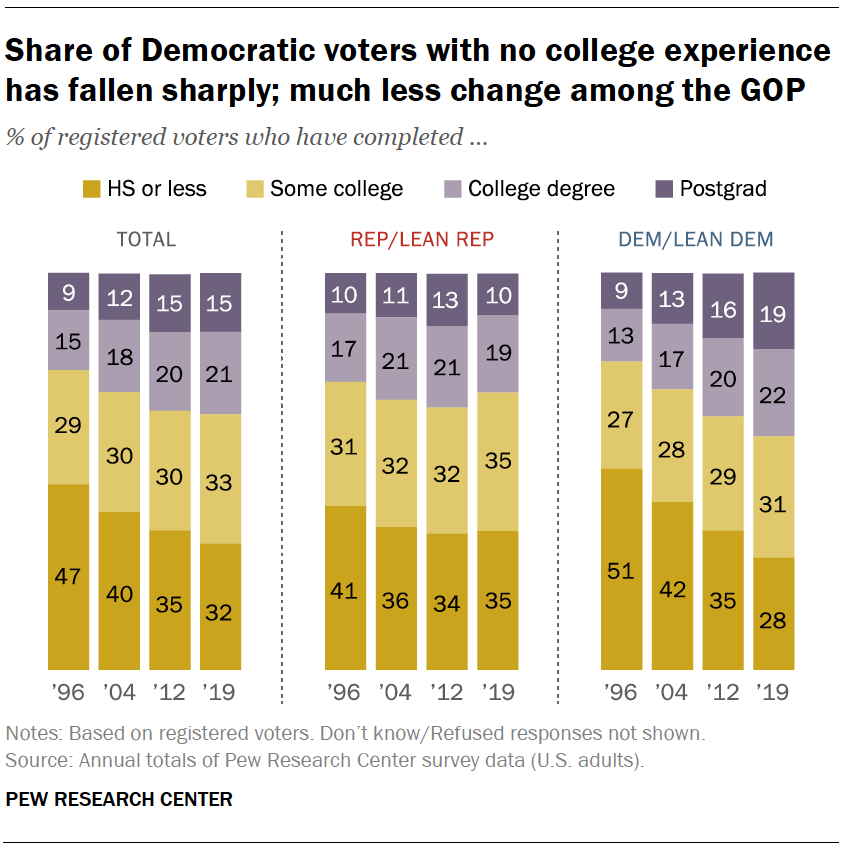 The educational landscape of the U.S. has changed dramatically since 1996, when Bill Clinton was seeking his second term as president.

At that time, nearly half of registered voters (47%) had never attended college; another three-in-ten (29%) had some college experience but no four-year degree, and roughly a quarter (24%) had at least a four-year college degree.

Today, only 32% have never attended college, while another third have some college experience and no degree and 36% have at least a four-year degree.

As a result, college graduates make up a much larger share of Democratic than Republican voters (41% vs. 30%). In 1996, Republican voters were more likely than Democrats to have at least a four-year degree (27% vs. 22%). 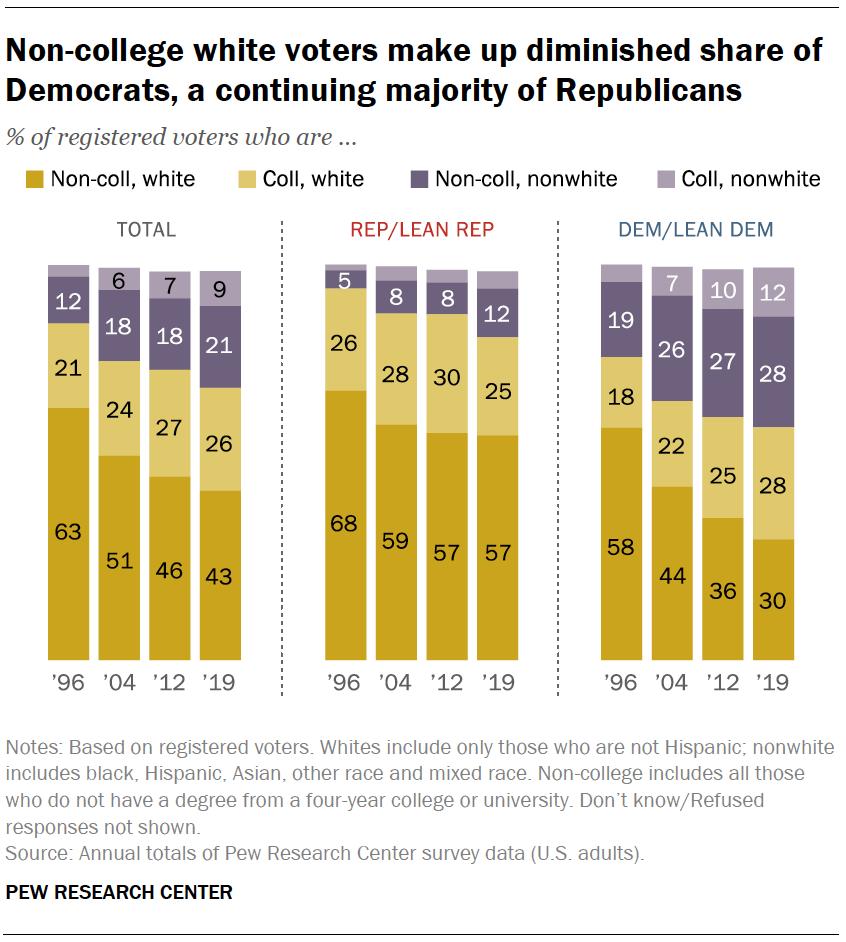 The rise in educational attainment among voters, combined with the growing ethnic diversity of the electorate, has had very different impacts on the Democratic and Republican coalitions.

In 1996, 63% of all registered voters, including majorities of Republicans (68%) and Democrats (58%), were whites who did not have a four-year college degree.

Since then, the share of non-college white voters has declined 20 percentage points. But while this group still constitutes a 57% majority of Republican voters – a share that has changed little since 2004 – non-college whites only make up 30% of Democratic voters.

The religious landscape of the United States has undergone major changes since 2008. As the share of registered voters who are religiously unaffiliated has increased, the share who identify as Christian has declined. More than one-quarter (28%) of voters identify as religiously unaffiliated today, up from 15% in 2008; those who identify as Christian decreased from 79% to 64% in that same period. (Data on religious affiliation dates to 2008; prior to that, Pew Research Center asked a different question about religious affiliation that is not directly comparable to its current measure.) 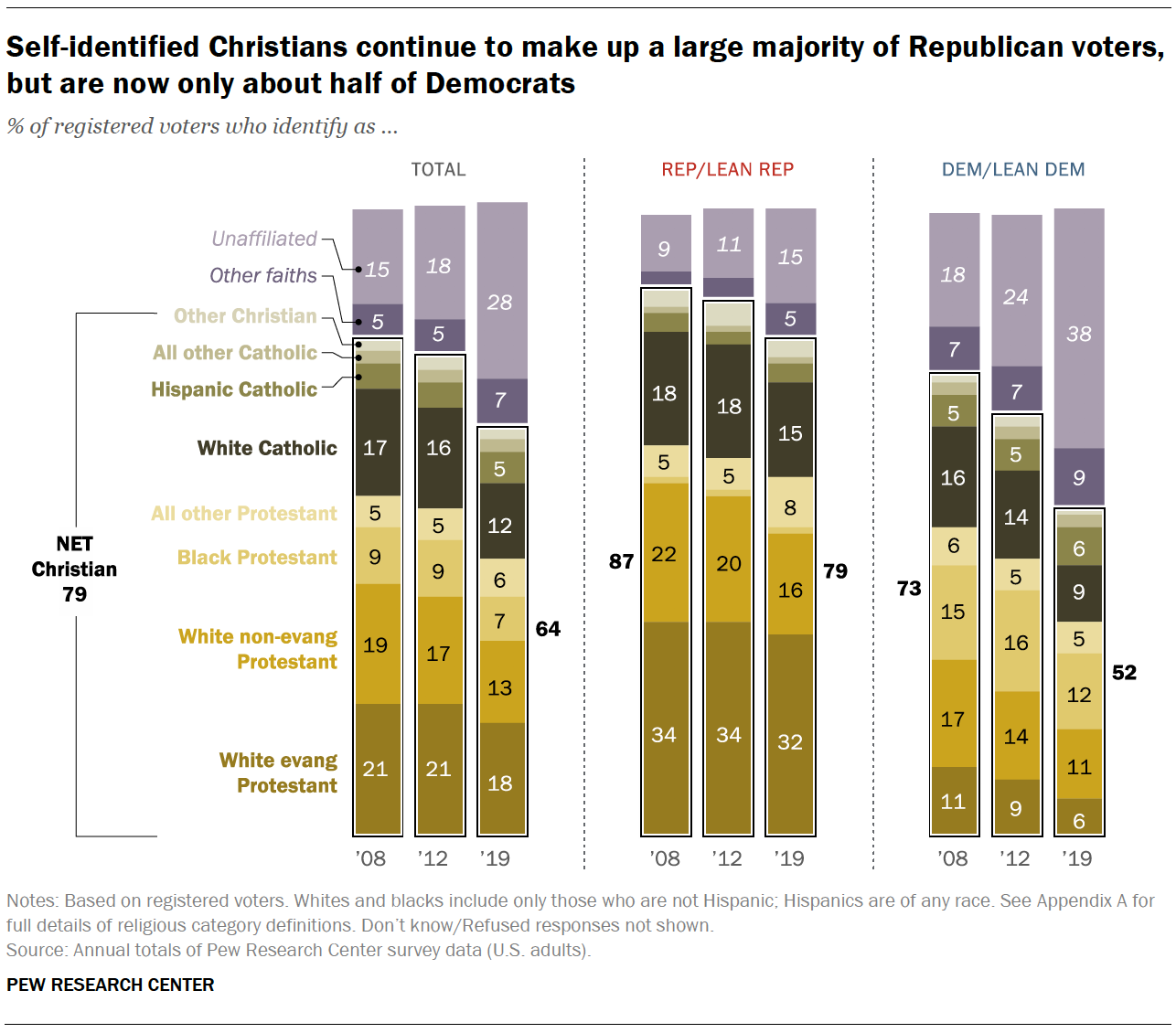