This report analyzes the views of registered voters in the United States towards the upcoming presidential election. For our analysis, we surveyed 12,638 U.S. adults, including 10,491 registered voters (5,861 of whom are Democratic and Democratic leaners) in January 2020. Everyone who took part is a member of Pew Research Center’s American Trends Panel (ATP), an online survey panel that is recruited through national, random sampling of residential addresses. This way nearly all U.S. adults have a chance of selection. The survey is weighted to be representative of the U.S. adult population by gender, race, ethnicity, partisan affiliation, education and other categories. Some of the analyses in the report also draw from prior surveys that members completed. For more details, see the methodology for this report. And read more about Pew Research Center’s ATP here.

Ahead of the first contests in the 2020 election, Democratic voters are highly engaged with the race for their party’s nomination, express positive views of the Democratic field and are united in opposition to Donald Trump. 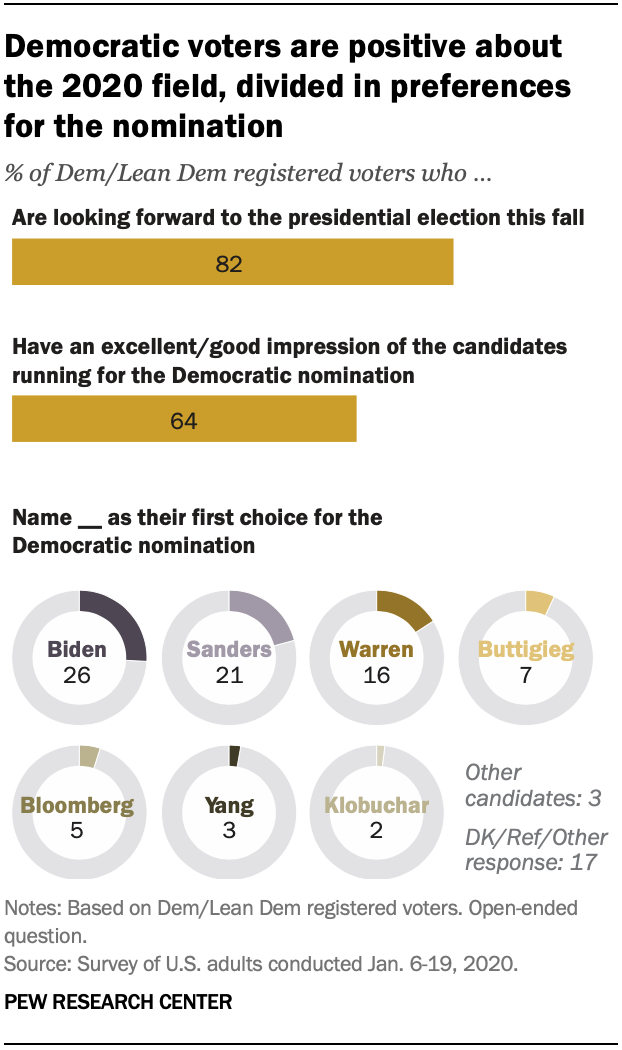 Yet many Democrats are uncertain if their party’s still-to-be-determined nominee can defeat Trump in the general election. Fewer than half (44%) expect victory for their party’s candidate this fall, while 34% decline to express an opinion and 22% think Trump will win. Republican voters, by contrast, are highly confident that Trump will win reelection (80% say he will probably or definitely win).

The national survey by Pew Research Center, conducted Jan. 6 to 19 among 10,491 registered voters, including 5,861 Democratic and Democratic-leaning voters, finds that Democrats’ preferences for the nominee are deeply divided along ideological and demographic lines. (Also new today – “Democratic voters generally satisfied with the primary process“).

As many national and early primary state surveys have found, Democrats’ preferences for the nomination are divided. Asked an open-ended question about their first choice for the nomination, 26% of Democratic and Democratic-leaning registered voters favor Biden, 21% Sanders, 16% Warren, 7% Buttigieg and 5% Bloomberg.

While Biden has an advantage over his rivals among conservative and moderate Democrats, who constitute about half of all Democratic voters, there is no clear leader among Democrats who describe their views as liberal, or among those who are very liberal. And as was the case in the primary campaign of 2016, Democrats are again divided by race and age: Biden leads among black Democrats, while white Democrats are closely divided. Sanders draws broad support among young Democrats, as he did four years ago, while Biden leads among older Democrats. (See detailed tables for more information)

The survey finds that while Democrats are divided over who should be the party’s nominee, they share similar attitudes on a wide range of political values and on many specific issues. Yet there also are differences among supporters of the Democratic candidates in attitudes about foreign policy, economic inequality and whether to seek compromise with Republicans. 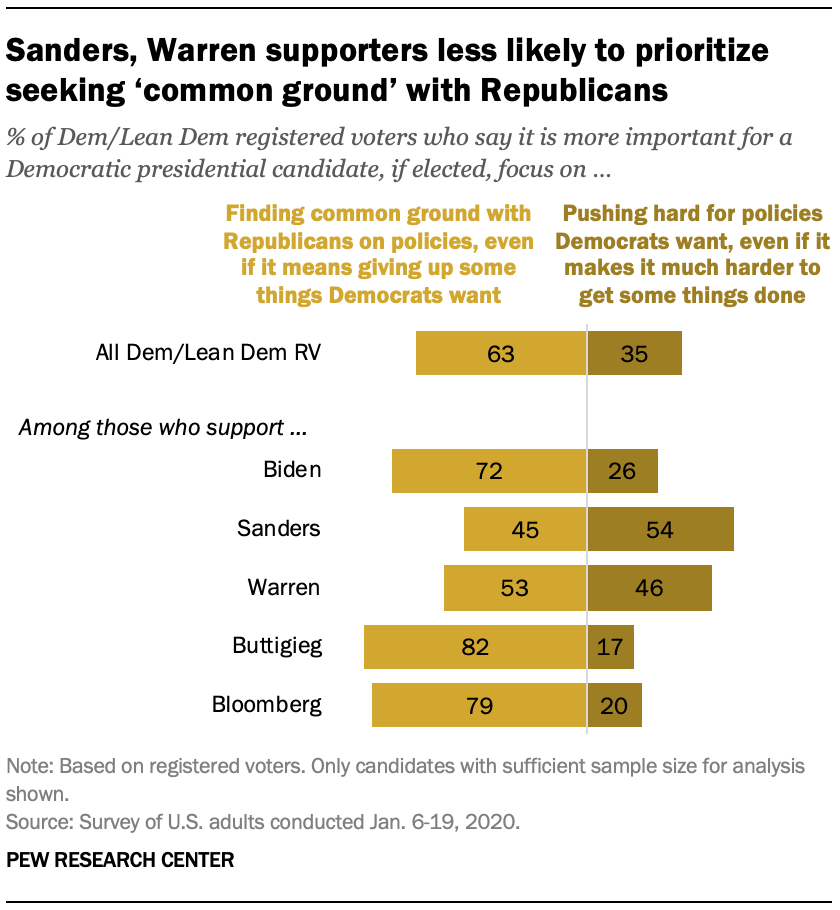 In some cases, these differences are a matter of degree rather than kind. For example, most Democratic voters, regardless of which candidate they prefer, support making tuition free at all public universities and building a single government healthcare program known as “Medicare for all,” which would replace private insurance. Yet only among Warren and Sanders supporters do majorities strongly support these ideas.

However, there are some clear-cut disagreements among Democrats, including whether it is more important for a Democratic candidate to “find common ground” with Republicans or to push hard for policies that Democrats want, even if this makes it harder to get some things done.

Overall, 63% of Democratic voters – including substantial shares of those who support Buttigieg (82%), Bloomberg (79%) and Biden (72%) for the nomination – say it is more important for a Democratic candidate to seek common ground with Republicans, even if it means giving up some things Democrats want.

Sanders and Warren supporters are much less supportive of finding common ground with Republicans. Roughly half of the Democrats who favor either candidate (54% of Sanders supporters, 46% of Warren supporters) say it is more important for a Democratic presidential candidate to push hard for policies Democrats want, even if this makes it harder to get things done.

Ideological divide in the Democratic contest

The share of Democratic and Democratic-leaning voters who describe their political views as liberal has increased markedly since 2000, though growth has slowed in recent years. Overall, about half of Democratic voters (47%) identify as liberal, including 15% who say they are very liberal.

Liberal Democrats (who constitute about a third of all Democratic voters) have distinctly different preferences for the party’s presidential nomination when compared with those who are very liberal. Nearly identical shares of liberal Democrats name Biden (25%), Warren (23%) and Sanders (22%) as their first choice for the nomination. 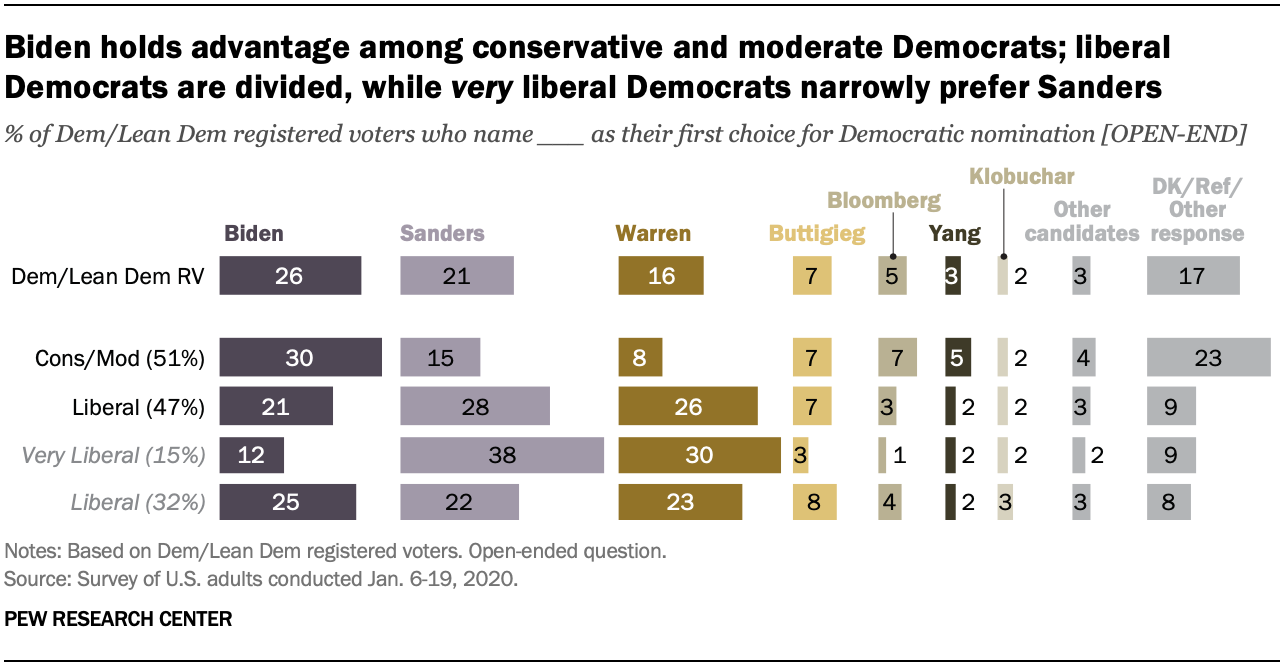 The preferences of conservative and moderate Democrats are less divided. Biden holds a substantial advantage: 30% of moderate and conservative Democrats favor Biden, while 15% back Sanders and smaller shares favor other candidates.

An early look at the general election

With the general election still more than nine months away, a large majority of registered voters (75%) say they are giving a lot or a little thought to the candidates running for president, while about as many (78%) say they are looking forward to the election in the fall. 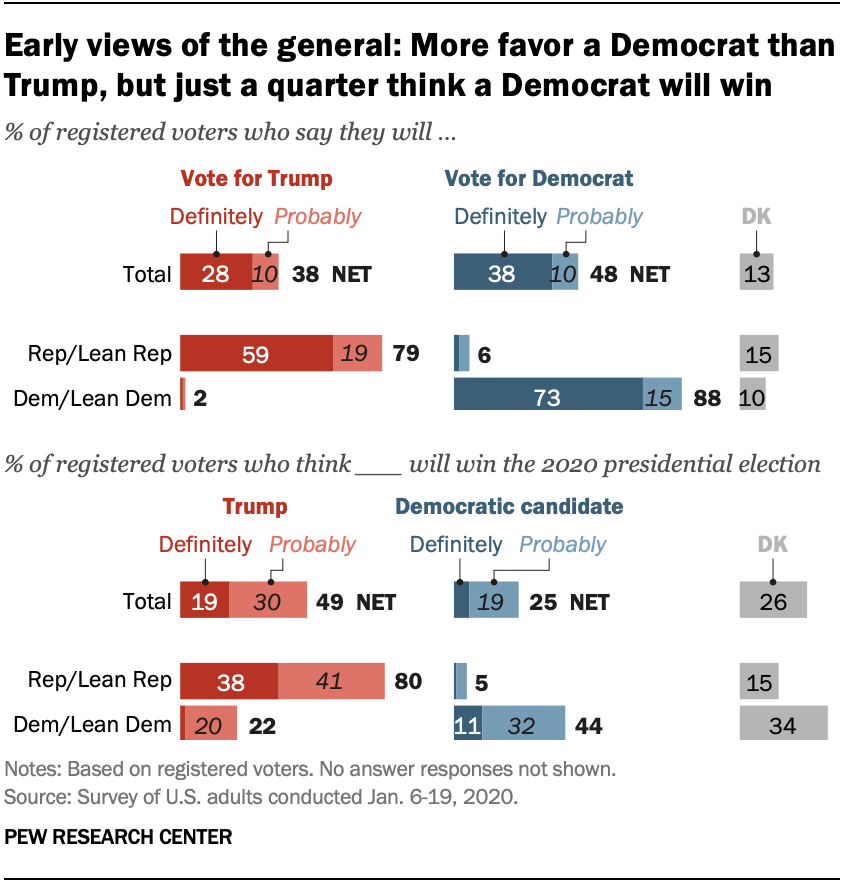 The expectation that Trump is likely to win reelection is consistent with past elections involving incumbents, particularly before the other party has chosen its nominee. In 2012, for example, more voters consistently predicted victory for Barack Obama than Mitt Romney. And at similar points in the 1992 and 2004 cycles, wide majorities predicted the incumbents would win against the still-to-be-named Democratic candidate.

When voters are asked to predict their reactions if Trump wins reelection, 57% express a negative emotion and say they would be either disappointed (32%) or angry (25%); fewer say they’d experience either relief (24%) or excitement (18%). 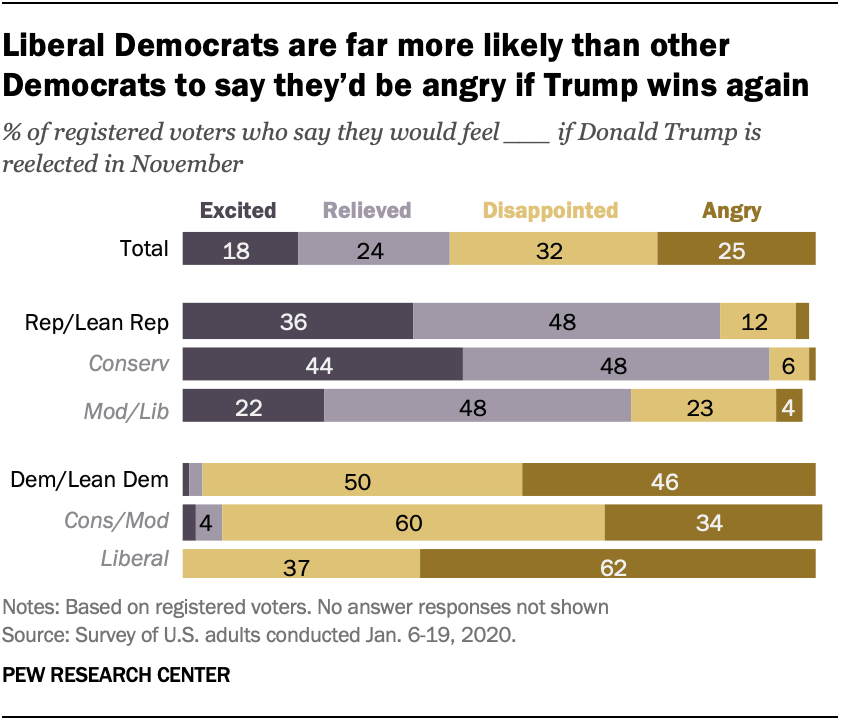 Most liberal Democratic voters express a strongly negative reaction to a possible Trump victory: 62% of liberal Democrats say they would be angry if Trump were reelected, compared with 34% of conservative and moderate Democrats.

Democrats differ on whether illegal immigration is a problem – and if other countries are better than the U.S.

On topics ranging from immigration and foreign policy to aid to the poor and economic inequality, Democratic voters generally agree on broad principles. And in virtually every area, the differences among supporters of the Democratic candidates are far narrower than the differences between Republican and Democratic voters. Still there are sharp disagreements among Democrats on several policy goals – such as the importance of the U.S. maintaining its role as the world’s lone military superpower – and specific policies. 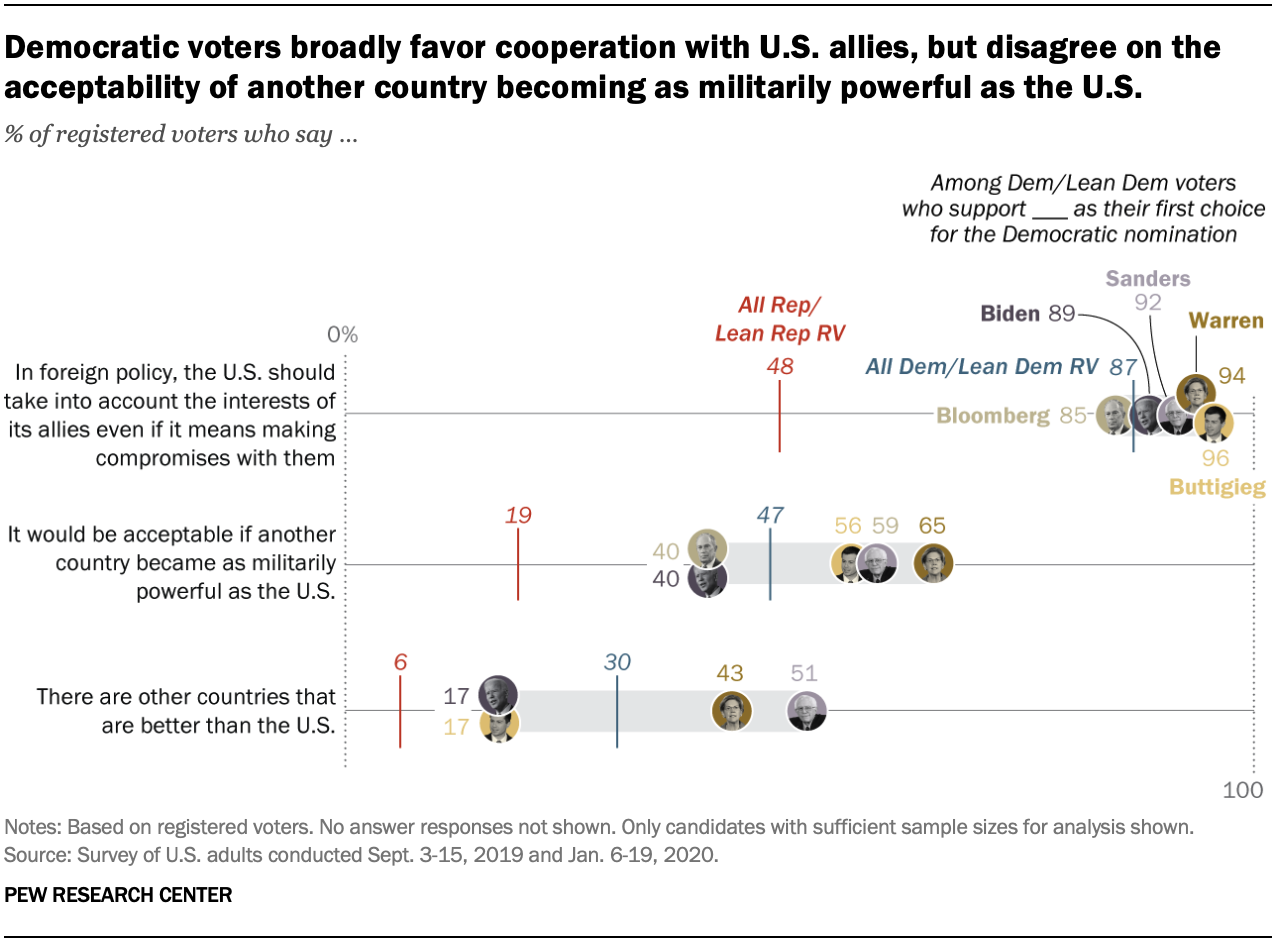 America’s place in the world. Large majorities of supporters of leading Democratic candidates say the U.S. should take allies’ interests into account, even if it means making compromises with them, when conducting foreign policy. However, 65% of Warren supporters – and nearly as many Democrats who support Sanders (59%) and Buttigieg (56%) – say it would be acceptable if another country became as militarily powerful as the U.S. Only 40% of Biden and Bloomberg supporters say this. In addition, when asked about America’s global status, 51% of Sanders supporters and 43% of Warren supporters say there are other countries that are better than the U.S.; just 17% of Biden and Buttigieg backers say the same. Most Biden and Buttigieg supporters say either that the U.S. is among the leading group of nations or that it “stands above” all other countries.

Immigration. Democratic voters overwhelmingly say that the growing number of newcomers to the U.S. does more to strengthen U.S. society than threaten traditional American customs and values. But the candidates’ supporters differ on whether illegal immigration is a problem for the U.S. Majorities of Bloomberg (61%) and Biden supporters (59%) say illegal immigration is a very big or moderately big problem for the country, compared with fewer than half of Buttigieg (41%), and Warren and Sanders supporters (36% each). As with nearly all issues, these differences pale in comparison to the overall partisan gap in these views; 94% of Republican voters view illegal immigration as a problem, including 74% who say it’s a very big problem. 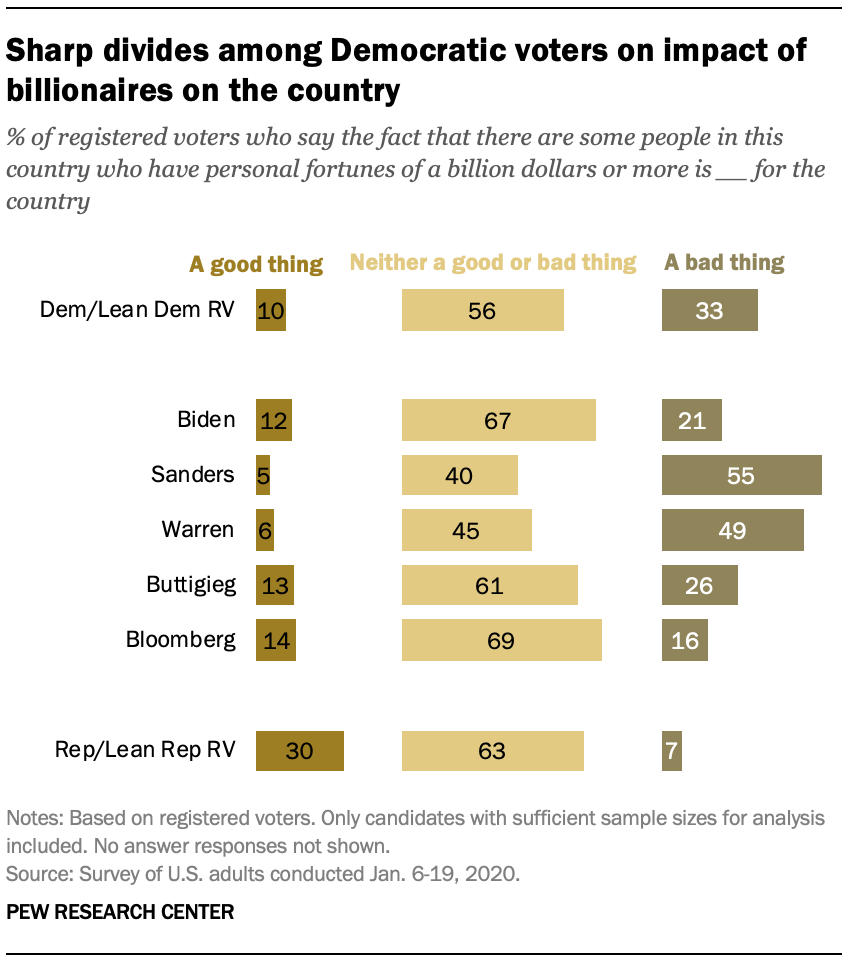 Social safety net. While Democrats generally favor more assistance to the needy, support for increased aid to the poor is higher among Warren and Sanders supporters (76%, 74%, respectively) than among Democrats who back Biden (56%), Buttigieg (48%) or Bloomberg (46%). Few Democrats, regardless of whom they support, favor less aid to the poor; rather, Biden, Buttigieg and Bloomberg supporters are more likely than Sanders and Warren supporters to say the government currently provides about the right amount of aid.

Economic inequality. Majorities of the supporters of leading Democratic candidates view economic inequality as a very big national problem; even larger shares say that business corporations in the U.S. have too much power. Yet Democrats disagree sharply about the impact of billionaires on the country. A majority of Sanders’ supporters (55%) and 49% of Warren supporters say the fact that there are some people with personal fortunes of a billion dollars or more is a bad thing. By contrast, the predominant view among Bloomberg supporters (69%), as well as Biden (67%) and Buttigieg supporters (61%), is that this is neither good nor bad. 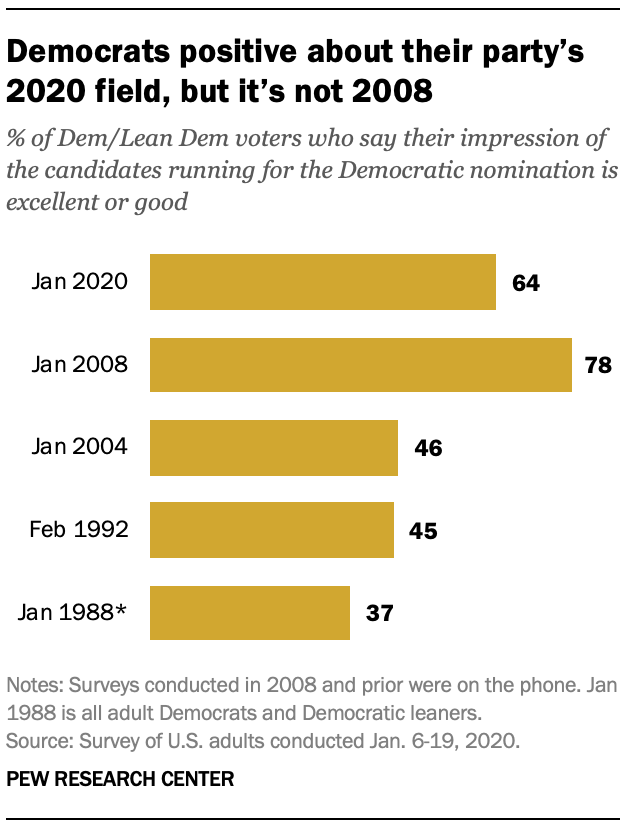 Democrats are positive about their presidential field, though less so than in 2008. Overall, 64% of Democratic voters have an excellent or good impression of the candidates running for the Democratic nomination. That is much higher than at similar points during the 1988, 1992 and 2004 presidential campaigns. In January 2008, however, 78% had a positive view of the presidential candidates as a group.

A majority of Democrats still say they find ‘several’ candidates exciting. As the Democratic caucuses and primaries get underway, only 43% of Democratic voters who express a preference for the nominee say they are only enthusiastic about their first choice; 54% say there are several candidates they feel excited about. These views have changed only modestly since August, when 35% were only enthusiastic about their first choice.

Next: 1. The Democratic nomination contest
← Prev Page
You are reading page1Page2Page3Page4
Next Page →

As Voting Begins, Democrats Are Upbeat About the 2020 Field, Divided in Their Preferences
Ideological divide in the Democratic contestAn early look at the general electionDemocrats differ on whether illegal immigration is a problem – and if other countries are better than the U.S.Other major findings
1. The Democratic nomination contest 2. Political values and Democratic candidate support Methodology