With less than six weeks to go before the elections for Congress, voter enthusiasm is at its highest level during any midterm in more than two decades. And a record share of registered voters – 72% – say the issue of which party controls Congress will be a factor in their vote. 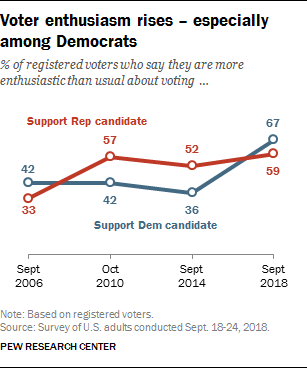 Opinions about Donald Trump also continue to be an important consideration for voters. A 60% majority views their midterm vote as an expression of opposition or support toward Trump – with far more saying their midterm vote will be “against” Trump (37%) than “for” him (23%).

The new national survey by Pew Research Center, conducted among 1,754 adults, including 1,439 registered voters, finds that the Democrats have several advantages at this point in the campaign.

Second, while voter enthusiasm is relatively high among voters in both parties, it is somewhat higher among voters who favor the Democratic over the Republican candidate. Overall, 61% of all registered voters say they are more enthusiastic about voting than in past congressional elections, higher than at any point during midterms in the past two decades, including at later points in those elections.

Two-thirds of Democratic voters (67%) say they are more enthusiastic than usual about voting, compared with 59% of Republican voters. The share of Democratic voters who express greater enthusiasm about voting is substantially higher than at comparable points in three prior midterms, while enthusiasm among GOP voters is slightly higher than in September 2014 (52%) and about the same level as in October 2010 (57%).

Third, more Americans view the Democratic Party than the Republican Party as more concerned with people’s needs, more honest and ethical and more willing to work with leaders from the other party. 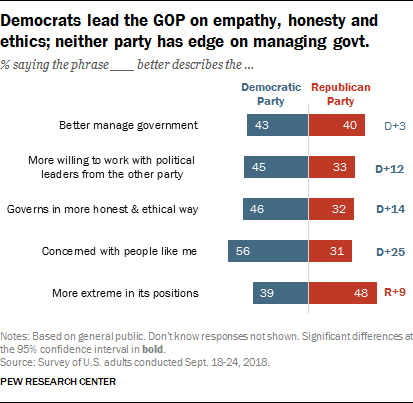 In the past, the Democratic Party has often held advantages on these traits, but in January 2017, shortly before Trump’s inauguration, the GOP ran nearly even with the Democrats on honesty and ethics and concern for “people like me.”

In terms of issues, the Democratic Party continues to hold a wide advantage over the Republican Party on dealing with health care (51% to 35%) and modest leads on foreign policy and immigration. While the two parties run about even on dealing with the economy (41% Democratic Party, 40% Republican Party), that represents a change since June, when the GOP held a significant, 9-point edge on handling the economy.

The survey, conducted amid allegations of sexual misconduct by Brett Kavanaugh, Trump’s nominee for the Supreme Court, finds that large majorities of voters in both parties view Supreme Court appointments as a “very important” voting issue. 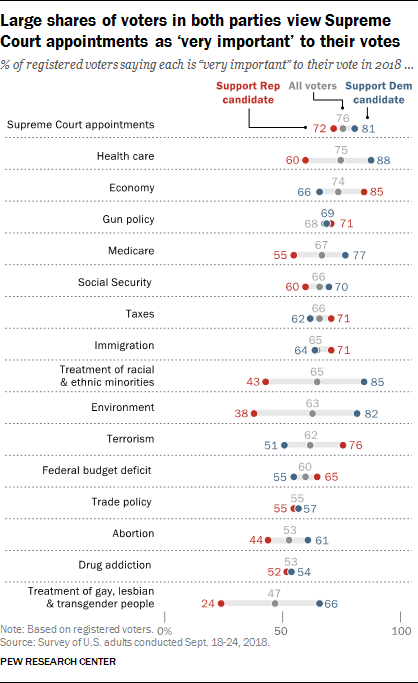 Overall, 76% of registered voters – including 81% who support the Democratic candidate and 72% who favor the Republican candidate – say appointments to the court will be very important to their vote this fall.

Among all voters, Supreme Court appointments rank with health care (75%) and the economy (74%) among the top voting issues.

While health care and the economy typically rank among the top issues for voters, there is no trend to past midterms on the importance of court appointments.

There are sizable partisan gaps over the importance of a number issues. As in the past, Democratic voters (82%) are far more likely than Republicans (38%) to say the environment will be very important.

Comparable shares of voters in both parties rate several issues as very important. For example, 71% of voters who favor the Republican candidate in their district and 69% who support the Democrat say gun policy will be very important. There also are not significant partisan differences on the importance of drug addiction and trade policy.

Looking ahead: Concerns about too little – or too much – oversight of the Trump administration 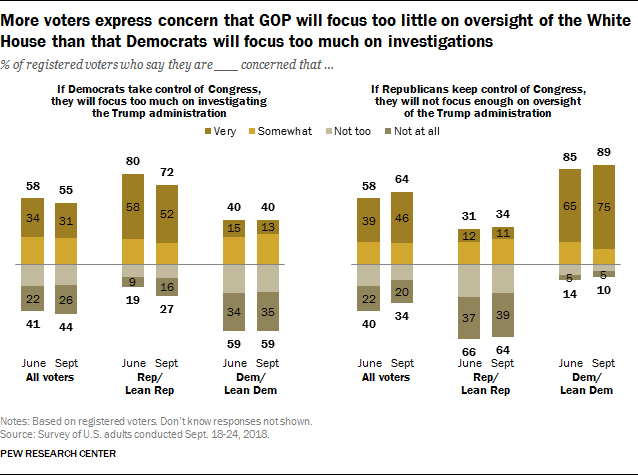 Currently, 64% of voters say if the Republicans keep control of Congress, they are very or somewhat concerned that the GOP will not focus enough on oversight of the administration. A smaller majority (55%) expresses concern that if the Democrats take control of Congress, they will focus too much on investigating the Trump administration. In June, identical shares of voters (58% each) had concerns over both possible scenarios.

These opinions remain deeply divided along partisan lines, but Democrats are increasingly likely to express a great deal of concern that, if Republicans prevail, they will fail to do enough oversight of the Trump administration. Three-quarters of Democratic voters say they are very concerned about this, up from 65% three months ago.

By contrast, only about half of Republican voters (52%) say they are very concerned that if Democrats win control of Congress, they will focus too much on investigating the Trump administration. That is lower than the share of Republican voters (58%) expressing a high level of concern over Democratic overreach in June.

Next: 2. Democrats have edge in 2018 midterm voting preferences
← Prev Page
You are reading page1Page2Page3Page4Page5
Next Page →

Voter Enthusiasm at Record High in Nationalized Midterm Environment
Top issues for voters: Supreme Court, health care, economyLooking ahead: Concerns about too little – or too much – oversight of the Trump administration
2. Democrats have edge in 2018 midterm voting preferences 3. Wide partisan differences on importance of many issues 4. Public now divided over which party could better handle the economy Methodology