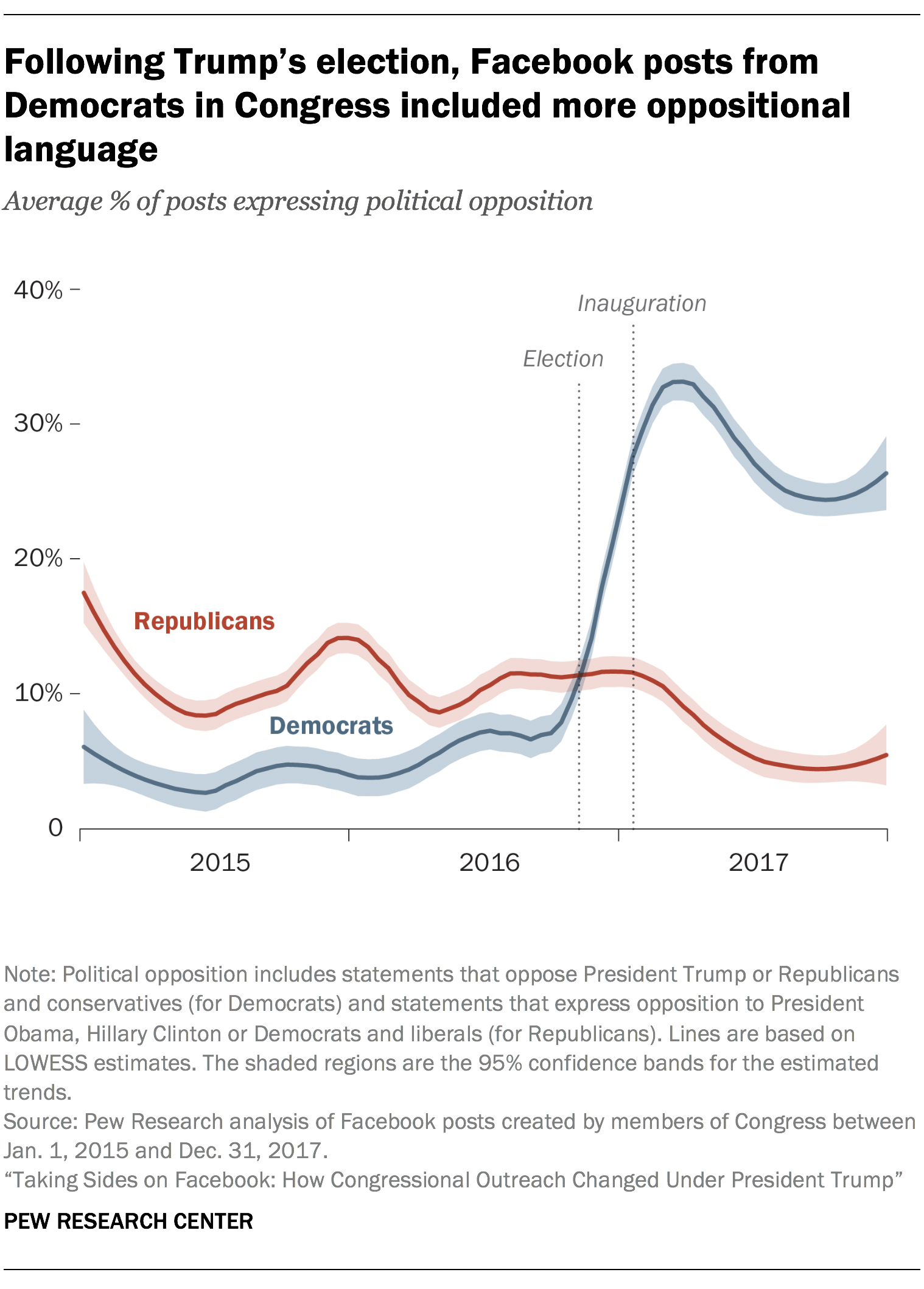 The 2016 presidential election coincided with substantial shifts in the ways that members of Congress communicated with their constituents online. A new Pew Research Center analysis examines congressional Facebook posts from Jan. 1, 2015, through Dec. 31, 2017, a three-year timespan that includes the entire 114th session of Congress, the 2016 primary and general elections, the first year of the 115th Congress, and Republican President Donald Trump’s first year in office. The analysis finds that Democrats expressed political opposition nearly five times as much under Trump as they did during the last two years of Barack Obama’s presidency. Much of this opposition was directed at President Trump, though Democrats also increasingly opposed Republican members of Congress.

Political opposition and political support refer to statements made by members of Congress on Facebook that oppose or support the actions, decisions or positions of political actors and groups. This report examines support or opposition directed toward Donald Trump, Barack Obama, Hillary Clinton, Democrats or liberals, and Republicans or conservatives. Researchers determined whether or not individual posts expressed opposition or support by classifying a set of posts manually and then training a machine learning model to classify the rest. Researchers classified whether posts expressed both opposition to some figures or groups and support for others, but did not classify both support and opposition directed at the same figures or groups.

Local issues refer to references within congressional statements to any place, group, individual(s) or event in the politician’s state or district. Researchers determined whether or not individual posts discussed local issues by classifying a set of posts manually and then training a machine learning model to classify the rest.

DW-NOMINATE is a measure of political ideology that places members of the U.S. House and Senate on a liberal-to-conservative ideology scale according to their roll-call voting history in each legislative session of Congress1 The scale ranges from -1 (very liberal) to 1 (very conservative) across all Congresses. For the time period studied here, it ranges between -0.77 and 0.99. Very liberal and very conservative legislators are defined as those with DW-NOMINATE scores in the furthest left 10% and furthest right 10% of all DW-NOMINATE scores. Moderates are defined as legislators with DW-NOMINATE scores in the middle 20% of all scores.

Engagement on Facebook refers to “likes,” “comments” and “shares,” as well as specific reactions, such as “angry.” On the Facebook platform, these digital actions provide users a means for interacting with posts created by members of Congress. 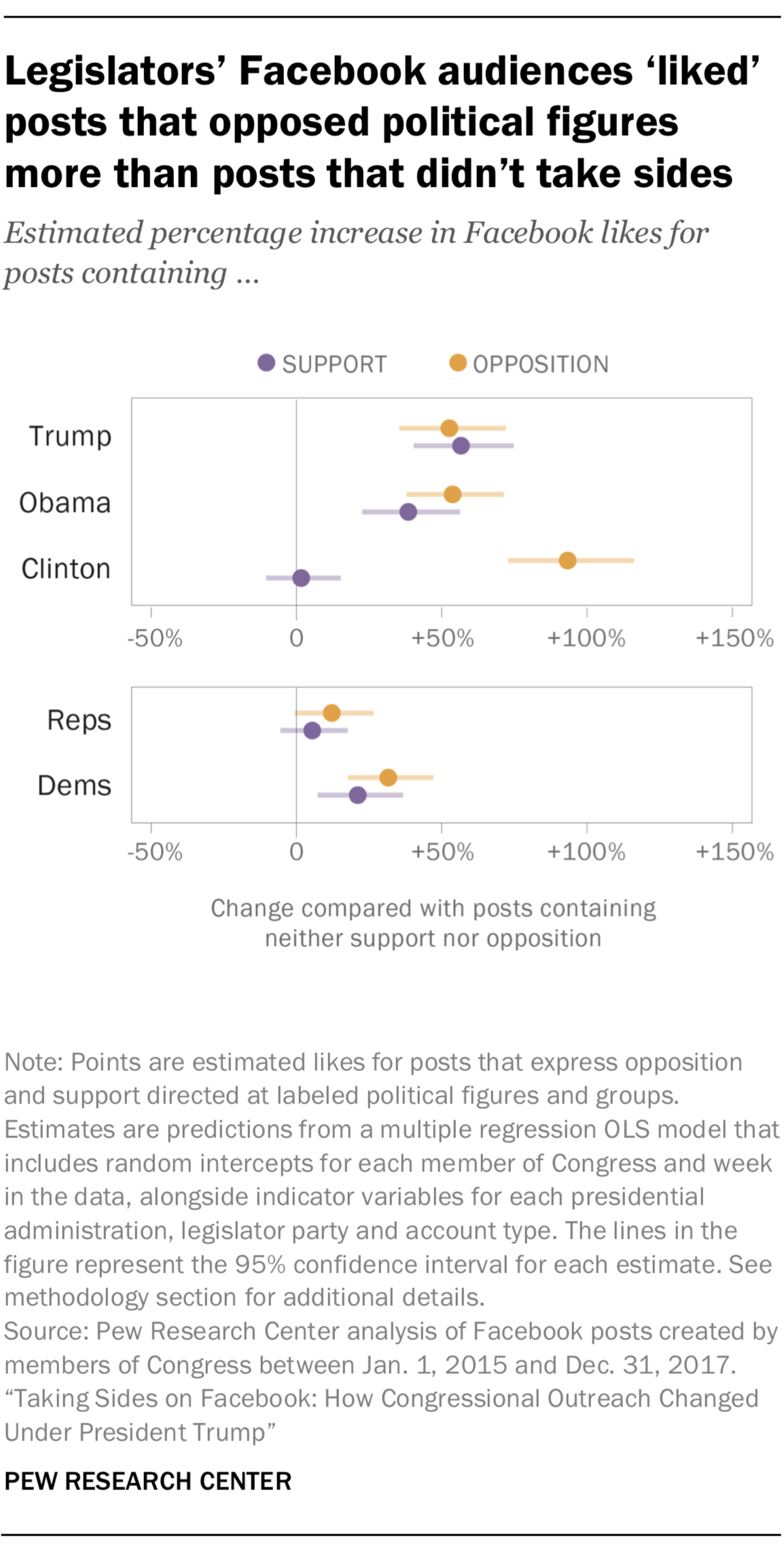 Members of Congress who expressed political opposition most often were also the most liberal or conservative.3 This pattern is in line with the Center’s previous research on how members of Congress express political disagreement. But the new analysis also shows that the most ideological members were also the most likely to express support for others in their party. In other words, the most liberal and conservative members of Congress both attacked those on the other side more often and were more likely to affirm their own side’s decisions and positions. Moderates, meanwhile, tended to focus most of their posts on local issues.

Nearly universally, both supportive and oppositional posts about Trump or Obama drew more engagement – including likes, comments and shares – than posts about other topics. But the pattern was somewhat different for Hillary Clinton. Congressional posts that supported her drew the same number of likes as posts that did not take sides either way, while posts opposing her received 93% more likes on average – the largest increase in likes across all the kinds of posts examined here.

The new analysis used a combination of human coders and machine learning techniques to examine both the changing nature of congressional Facebook outreach and the way Facebook audiences responded to varying kinds of messages. To create the dataset, researchers studied more than 700,000 posts from 599 members of Congress during a three-year period surrounding the November 2016 election and Trump’s first year in office, beginning Jan. 1, 2015, and ending Dec. 31, 2017. Among the key findings:

This analysis is based on 737,598 Facebook posts issued by 599 members of Congress between Jan. 1, 2015, and Dec. 31, 2017. The total number of legislators is greater than 535 (the current number of voting officials in the U.S. House and Senate) because members who were newly elected in the 115th Congress or in special elections are included in the study, as long as they produced at least 10 posts within a given Congress. 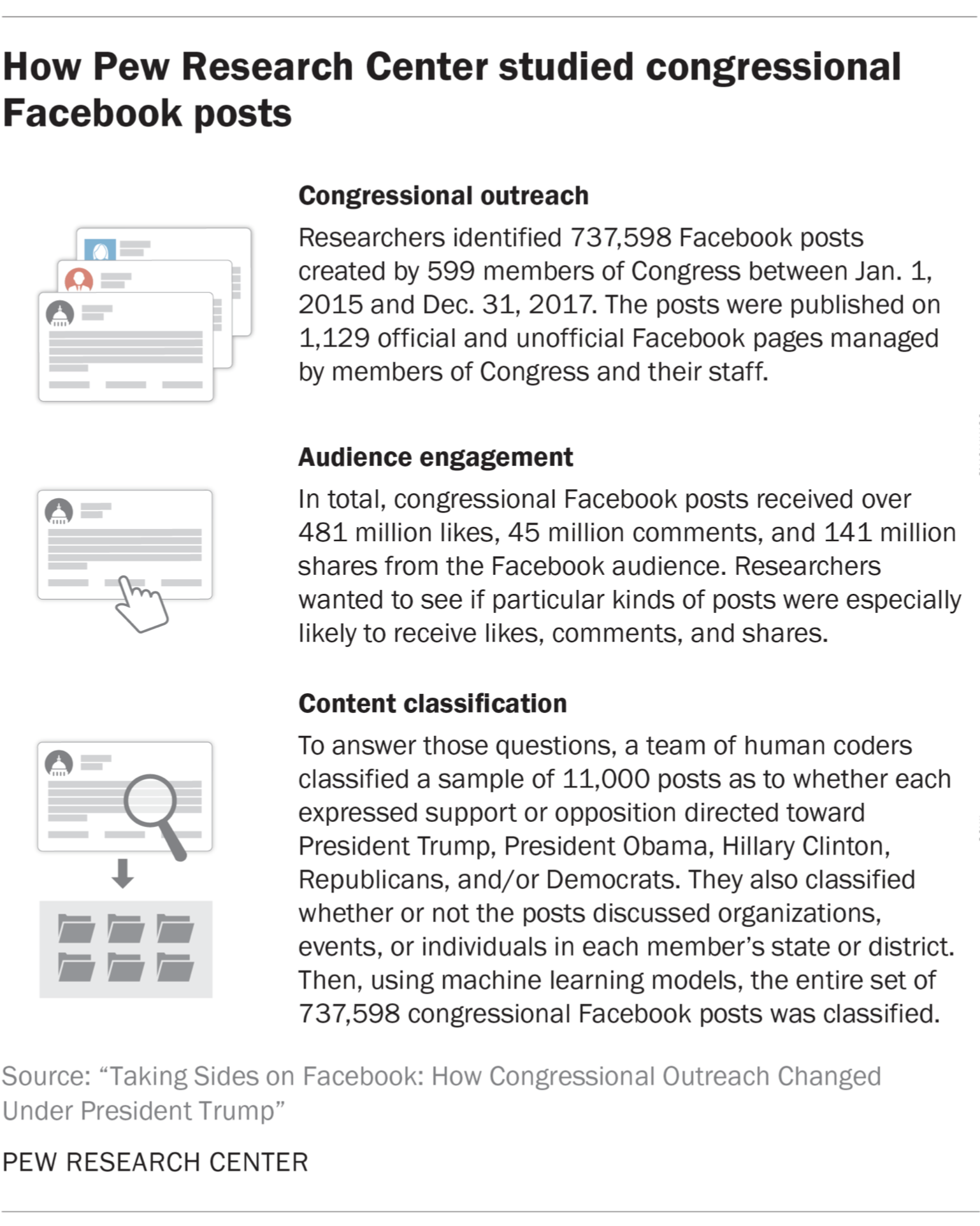 Researchers included both official Facebook accounts (those managed by congressional staff) and unofficial accounts (those used in a personal or campaign capacity) for members of Congress in this analysis. They did so in order to capture a more complete range of outreach on social media than would be possible with official accounts alone. As a result, the study includes a total of 1,129 accounts belonging to the 599 individual legislators.

Official accounts are used to communicate information as part of the member’s representational or legislative capacity, and U.S. Senate and House members may draw upon official staff resources appropriated by Congress when releasing content via these accounts. Unofficial accounts – often used in a personal and campaign capacity – may not draw on these government resources under official House and Senate guidelines. Members posted more often on official accounts across the study period: 76% of the average member’s posts came from their official account (for Democrats, the share was 78%; for Republicans, it was 75%).

To classify the posts, Pew Research Center manually analyzed a subset (11,000 total) of all the posts, classifying each post’s contents for the events, topics and issues raised or discussed in each one. Specifically, the analysts coded each post based on whether it expressed disagreement with presidents, candidates or parties; expressed support for the same; or mentioned local events, places or people. Next, researchers trained machine learning algorithms to make predictions – based on what the human coders reported – in order to classify the content of the entire set of posts.

How researchers classified more than 700,000 posts

Researchers asked human coders recruited from Amazon’s Mechanical Turk to read a sample of 11,000 posts and then note whether or not the post mentioned a list of political figures and groups. That list included Trump, Obama and Clinton, as well as two political groups: Democrats and/or liberals and Republicans and/or conservatives. The coders determined whether each post that mentioned one of those individuals or groups expressed support, opposition or neither toward each figure or group. Human coders also determined whether or not each post discussed local issues, defined as relating to “a place, a group, individual(s), or an event in the politician’s state or district.”

Each set of particular kinds of post – those labeled as opposing Obama, or supporting Republicans, for instance – was used as a “training dataset” for separate machine learning models. Those models used the human decisions about what words convey political support or opposition as a guide for determining how to classify the remaining posts that human coders did not read and classify. This approach builds upon previous Pew Research Center work that examined similar kinds of rhetoric in congressional statements. Performance statistics and additional details are provided in the methodology.

While Facebook is one important part of members’ media outreach efforts, members also communicate with their constituents through press releases, town hall meetings, media appearances and on other social media outlets. Although this report does not examine communication across all these channels, Facebook posts constitute a useful way to compare members’ communication, as they can be systematically captured and analyzed. Previous research suggests that statements that members of Congress express on Facebook are similar in many ways to those they make in press releases. Focusing on Facebook posts also makes it possible to measure how much a member’s audience interacts with their posts via likes, comments and shares. Facebook is the most widely used social media website (excluding YouTube) and the social media site from which most Americans get news.

Next: 1. Democrats posted more and expressed more opposition after Trump took office
← Prev Page
You are reading page1Page2Page3Page4Page5
Next Page →