A week after Donald Trump nominated Brett Kavanaugh to fill Justice Anthony Kennedy’s seat on the U.S. Supreme Court, the public is split in its early views of the nomination. Overall, 41% think the Senate should confirm Kavanaugh to the Supreme Court, while about as many (36%) say they should not; 23% do not offer a view on the question. 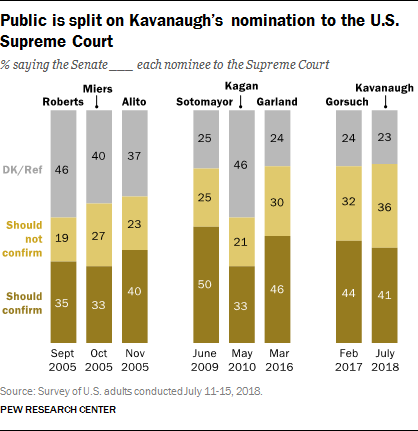 In February 2017, views of Neil Gorsuch’s nomination were similar, though the balance of opinion was more positive. At that time, 44% said the Senate should confirm Gorsuch to fill the seated vacated by the late Justice Antonin Scalia; fewer (32%) said it should not.

And most previous nominees to the court during the presidencies of Barack Obama and George W. Bush were initially viewed more positively than negatively.

Ahead of Kavanaugh’s Senate confirmation hearing, opinions of his nomination are already deeply polarized: 73% of Republicans and Republican-leaning independents think he should be confirmed. By contrast, a wide majority of Democrats and Democratic leaners (63%) say the Senate should not confirm him. The partisan gap is comparable to the divide over Gorsuch’s nomination last year, but is wider than for most previous Supreme Court selections.

The survey by Pew Research Center, conducted July 11-15 among 1,007 adults, finds widespread concern among Democrats about Kavanaugh’s impact on the court’s ideological balance. 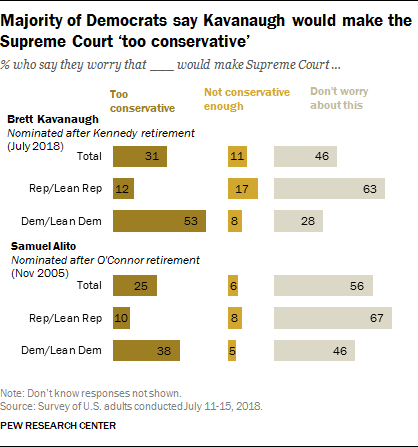 Democratic concern about the Supreme Court moving in a conservative direction is higher today than it was in November 2005, when George W. Bush nominated Samuel Alito to replace Justice Sandra Day O’Connor. At that time, fewer than half of Democrats (38%) said they worried Alito would make the court too conservative.

A large majority of Americans (83%) say the choice of the next Supreme Court justice is either very or somewhat important to them personally, with 63% saying it is very important. Just 16% say it is not too important or not at all important.

In 2016, shortly before Obama nominated Merrick Garland to the court, slightly fewer (57%) said the selection of the next justice was very important. Just 40% expressed this view in 2010, after Justice John Paul Stevens announced his retirement from the court and before Obama named Justice Elena Kagan as his replacement. 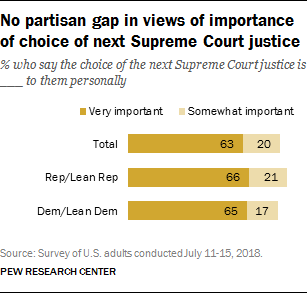 Similar majorities of Republicans and Republican leaners and Democrats and Democratic leaners say the choice is very important to them personally (66% and 65%, respectively).

Most want Kavanaugh to address abortion in confirmation hearings

Nearly four-in-ten Americans (39%) say that if Kavanaugh is confirmed by the Senate to sit on the Supreme Court he would overturn the court’s Roe v. Wade decision guaranteeing the right to abortion. Fewer (29%) say Kavanaugh would not vote to overturn Roe, while 32% do not express an opinion or say it would not matter. 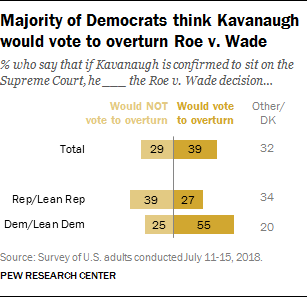 Democrats, especially liberal Democrats, think Kavanaugh would support overturning Roe v. Wade. A majority of Democrats (55%), including two-thirds of liberals (67%), say Kavanaugh would vote to overturn the landmark decision on abortion. Just 43% of moderate and conservative Democrats say the same.

In contrast, Republicans are divided: 39% say Kavanaugh would not vote to overturn Roe, while 27% say he would do this; 34% offer no response. There are no significant ideological differences among Republicans in these views. 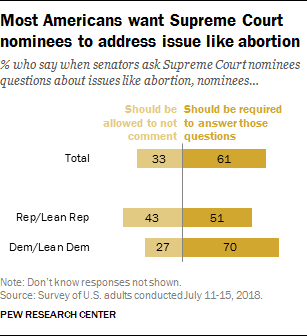 While the public is divided in its expectations of how Kavanaugh would address Roe, most Americans want Supreme Court nominees to answer senators’ questions on issues like abortion during confirmation hearings.

Overall, 61% of adults –including 70% of Democrats and 51% of Republicans – say that when senators ask about issues like abortion, Supreme Court nominees should be required to answer.

Gender and age differences in views of Kavanaugh’s nomination

Opinions about Kavanaugh’s nomination to the Supreme Court are divided by gender and age, as well as by partisanship.

Adults ages 50 and older are significantly more likely to support than oppose the Senate confirming Kavanaugh to the Supreme Court. There is more opposition among adults younger than 50, who are roughly divided in their views. 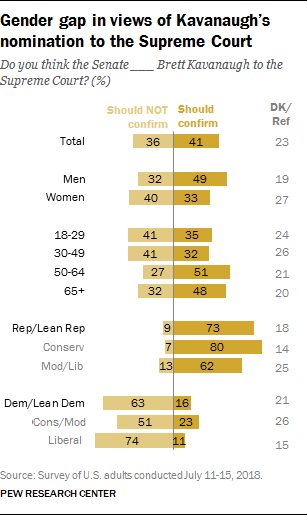 Both parties are divided ideologically in views of Kavanaugh’s nomination, in part because both liberal Democrats and conservative Republicans are more likely than less ideological members of their parties to express an opinion about the issue.

Among Republicans and Republican leaners, conservatives (80%) are more likely than moderates and liberals (62%) to say they think the Senate should confirm Kavanaugh.

And while liberal Democrats and Democratic leaners overwhelmingly oppose the nomination (74% to 11%), conservative and moderate Democrats oppose it by a much smaller margin (51% to 23%).

The overall partisan gap between Republicans and Democrats in views of Kavanaugh’s nomination is as large as it has been for any nominee in recent years.

Republicans and Republican leaners (73%) are 57-percentage points more likely than Democrats and Democratic leaners (16%) to say they think the Senate should confirm Kavanaugh to the Supreme Court. This is about the same as the partisan gap in views of Neil Gorsuch in February 2017 (55 points), but larger than for previous appointments made by George W. Bush and Obama. 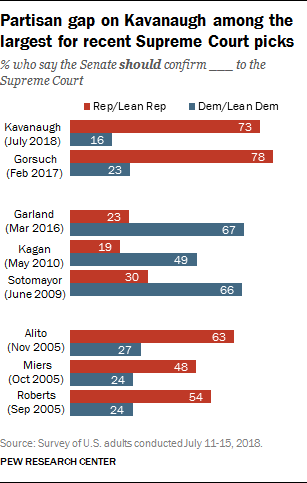 For example, in June 2009 there was a 36-point gap between the shares of Republicans (30%) and Democrats (66%) who supported the confirmation of Obama’s nominee Sonya Sotomayor to the Supreme Court. And in September 2005, the partisan gap in views of Bush’s nominee John Roberts was about half of what it is today for Kavanaugh (30 points vs. 57 points).