Nearly a month after Donald Trump’s election as president, the public views his transition to the White House less positively than those of past presidents-elect. And while expectations for Trump’s presidency have improved since before his victory, about as many Americans say Trump will be a poor or terrible president as a good or great one.

The latest national survey by Pew Research Center, conducted Nov. 30-Dec. 5 among 1,502 adults, finds that 40% approve of Trump’s cabinet choices and high-level appointments, while 41% approve of the job he has done so far in explaining his policies and plans for the future.

In December 2008, 71% of Americans approved of Barack Obama’s cabinet choices, and 58% expressed positive views of George W. Bush’s high-level appointments in January 2001, prior to his inauguration. Similarly, higher shares approved of the way that both Obama (72%) and Bush (50%) explained their policies and plans for the future than say that about Trump today.

Overall, 35% of Americans think Trump will be a good or great president; 18% say he will be average, while 38% say he will be poor or terrible. However, these assessments are far more positive than they were throughout the campaign: In October, just 25% of the public said Trump would make a good or great president, while 57% said he would be poor or terrible.

Republicans express more positive views of a Trump presidency than they did in October, while Democrats have less negative expectations. Two-thirds of Republicans and Republican-leaning independents (67%) now say Trump will be a good or great president; in October, fewer (54%) Republicans said this.

In October, 89% of Democrats and Democratic leaners thought Trump would make a poor or terrible president, with 74% calling him terrible. Today, 64% of Democrats view his prospective presidency negatively, with 45% saying he will be terrible. 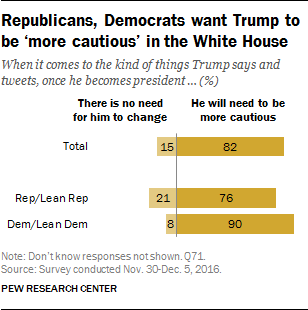 However, many of the same doubts and concerns that voters expressed about Trump’s qualifications and temperament during the campaign are evident as he prepares to take office. Just 37% of the public views Trump as well-qualified; 32% of registered voters described Trump as well-qualified in October. Majorities continue to say Trump is reckless (65%) and has poor judgment (62%), while 68% describe him as “hard to like.”

In the aftermath of a deeply divisive campaign, majorities of Americans say there are “strong” conflicts between many groups in society – between Republicans and Democrats, the rich and poor, and blacks and whites, as well as between immigrants and people born in the United States. 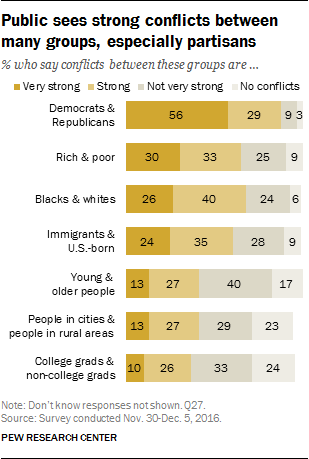 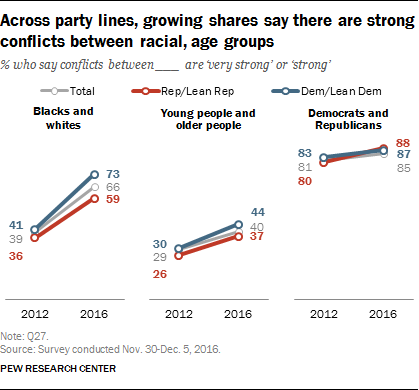 The belief that there are strong racial and age conflicts in this country has increased across partisan lines. Nearly three-quarters of Democrats (73%) currently say there are very strong or strong conflicts between blacks and whites, up from just 41% four years ago. Over the same period, the share of Republicans saying this has risen from 36% to 59%.

Similarly, the share of Democrats who say there are at least strong conflicts between young people and older adults has risen 14 percentage points since 2012 (from 30% to 44%), while increasing 11 points among Republicans (26% to 37%). 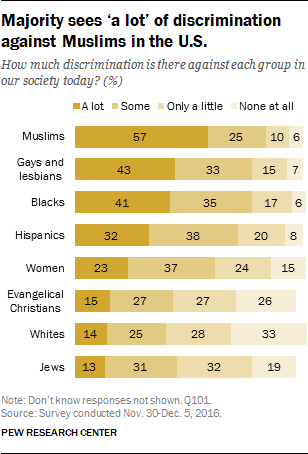 Democrats also are more likely than Republicans to say there is at least some discrimination against women (75% vs. 43%).

Public divided on the ACA, many unaware of proposed Medicare changes

The public is divided over the Affordable Care Act – and divided over whether it should be repealed or expanded. While views of the law have changed only modestly in recent years, predictions about the law’s fate have shifted dramatically.

A second major issue likely to be considered by the 115th Congress – possible changes to Medicare – has not resonated widely with the public. Overall, only about half of the public (51%) has heard a lot (12%) or a little (39%) about a proposal to change Medicare to a program that would give future participants a credit toward purchasing private health insurance. About as many either have heard nothing (48%) or don’t know (1%).

Republicans less likely to say Clinton won popular vote. Most Americans know that Trump won the most electoral college votes (78% say this) and that Hillary Clinton won the most individual votes nationwide (72%). While there are only slight partisan differences in awareness of the vote in the electoral college, 81% of Democrats and Democratic leaners say correctly that Clinton won the national popular vote, compared with a smaller majority (68%) of Republicans and Republican leaners.

Confidence in Trump varies, depending on the issue. A majority of the public (60%) says they are very or somewhat confident that Trump will work effectively with Congress, while 52% are confident he will manage the executive branch effectively. Fewer have confidence in him handling an international crisis (45%) or using military force wisely (44%).

Concerns about Trump’s possible conflicts. Most Americans say they are very concerned (45%) or somewhat concerned (20%) that Trump’s relationships with businesses or foreign governments conflict with his ability to serve the country’s best interests. These views are little changed from late October, when 42% of registered voters had a great deal of concern over Trump’s potential conflicts. 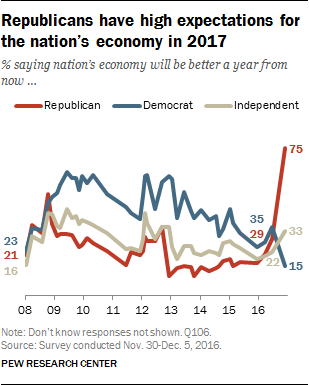 Mixed views of Mike Pence. Opinions about Mike Pence are divided – 39% view the vice president-elect favorably, while 42% have an unfavorable opinion. But most Americans (54%) think Pence is qualified to become president if anything happens to Trump; just 30% say he is not qualified. Pence has a very positive image among white evangelical Christians. Two-thirds (67%) view him favorably, and 78% say he is qualified to serve as president.

Next: 1. Views of President-elect Trump and his administration
← Prev Page
You are reading page1Page2Page3Page4Page5Page6Page7Page8
Next Page →

Low Approval of Trump’s Transition but Outlook for His Presidency Improves
Public divided on the ACA, many unaware of proposed Medicare changesOther important findings
1. Views of President-elect Trump and his administration 2. Discrimination and conflicts in U.S. society 3. Political values: Government regulation, environment, immigration, race, views of Islam 4. Views of the ACA, Medicare and the nation’s economy 5. Views of Mike Pence 6. Awareness of election results Methodology