As the 15th anniversary of 9/11 approaches, partisan differences over the ability of terrorists to launch a major attack on the United States are now as wide as at any point dating back to 2002.

Currently, 40% of the public says that the ability of terrorists to launch another major attack on the United States is greater than it was at the time of the 9/11 attacks, which is the highest share expressing this view over the past 14 years. About a third (31%) say terrorists’ abilities to attack are the same as at the time of 9/11, while just 25% say their ability to initiate a major attack is less than at that time.

The latest national survey by Pew Research Center, conducted Aug. 23-Sept. 2 among 1,201 adults, finds that the growth in the belief that terrorists are now better able to launch a major strike on the U.S. has come almost entirely among Republicans. Today, 58% of Republicans view the ability of terrorists to attack as greater than at the time of 9/11, up 18 percentage points since November 2013.

Opinions about terrorists’ capabilities to attack the U.S. have long been divided along partisan lines: During George W. Bush’s presidency, Democrats were often more likely than Republicans to say the ability to terrorists to launch a major strike was greater than at the time of 9/11, while the reverse has been true during Barack Obama’s administration. But this marks the first time in the past 14 years that a majority in either party has expressed this view.

The widening partisan gap in these attitudes is consistent with other recent measures of opinions on the government’s ability to deal with terrorism. In April, for instance, 75% of Democrats said the U.S. government was doing very or fairly well in reducing the threat of terrorism; just 29% of Republicans said the same.

The current survey also finds that partisan differences in views about the tradeoff between protection from terrorism and civil liberties are about as large as at any point in more than a decade.

These views are little changed from April, but in December, after the terrorist attack in San Bernardino, California, somewhat more (56%) said their greater concern was that anti-terrorism policies had not gone far enough in protecting the country.

In July 2013, following the revelations of the government’s telephone and digital surveillance programs, more Americans expressed concern that anti-terrorism policies had infringed on civil liberties (47%) than said they had done too little to protect against terrorism (32%) – the first time this had occurred in more the than a decade of polling. Nearly identical percentages of Republicans (43%) and Democrats (42%) said their bigger concern was that polices had gone too far in restricting civil liberties.

But since then, following the emergence of ISIS and terrorist attacks in this country, opinions have shifted, especially among Republicans. The share of Republicans who say their bigger concern is that government policies have done too little to protect against terrorism has risen 30 percentage points since July 2013 (38% then, 68% today), while showing much less change among Democrats (38% then, 46% today). 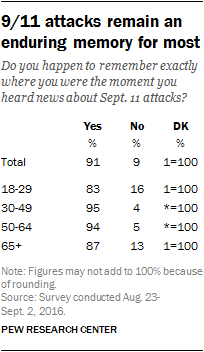 Nearly 15 years after 9/11, the attacks of that day continue to be a powerful memory for most Americans. Fully 91% of adults today say they remember exactly where they were or what they were doing the moment they heard news about the Sept. 11 attacks.

The share of the public that say they have a memory of the moment today is little changed from what it was one year, five years and 10 years after the terrorist attacks. 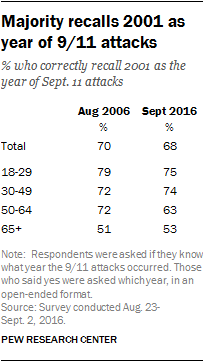