For the past several years, large majorities of both Democrats and Republicans have favored making private gun sales and sales at gun shows subject to background checks. 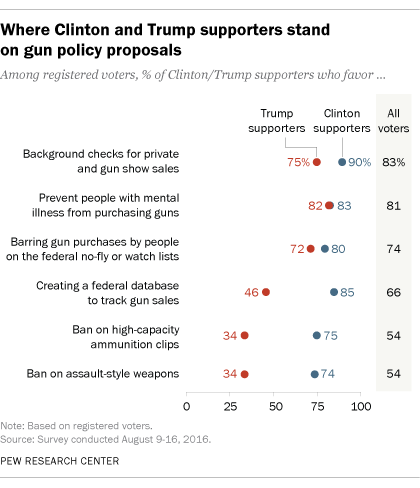 Other proposals are much more divisive, however. For instance, about twice as many Clinton supporters as Trump backers favor a ban on assault-style weapons (74% vs. 34%) and the differences are about as large in views of a ban on high-capacity ammunition clips (75% vs. 34%).

Moreover, the gap in how candidates’ supporters view overall priorities for the nation’s gun policy is much wider today than it has been in any presidential campaign dating to 2000.

As in recent years, the public overall remains divided over whether it is generally more important to protect the right of Americans to own guns (52%) or to control gun ownership (46%).

Today, registered voters who prefer the Democratic candidate are more supportive of controlling gun ownership than during the four previous campaigns, while supporters of the Republican candidate are less supportive.

By more than four-to-one (79% to 19%), Clinton supporters prioritize controlling gun ownership over protecting gun rights. By about nine-to-one (90% to 9%), Trump supporters express the opposite view – that it is generally more important to protect gun rights than control gun ownership.

In 2000, there was a 20-percentage-point gap between the shares of Al Gore and George W. Bush supporters who said it was more important to control gun ownership than protect gun rights (66% vs 46%). By 2012, when Barack Obama ran against Mitt Romney, that difference had increased to 41 points (62% vs. 21%) and today it stands at 70 points (79% of Clinton supporters vs. 9% of Trump supporters). 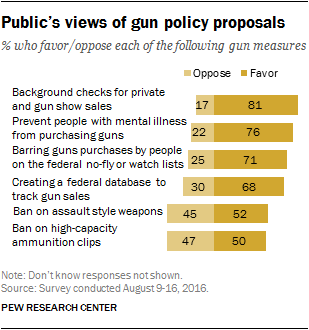 There is broad public support for background checks for private gun sales and sales at gun shows (81%), laws to prevent the mentally ill from buying guns (76%), barring gun purchases by those on government screening lists (71%), and creating a federal database to track gun sales (68%).

About half support bans on assault-style weapons (52%) and high-capacity ammunition clips (50%). 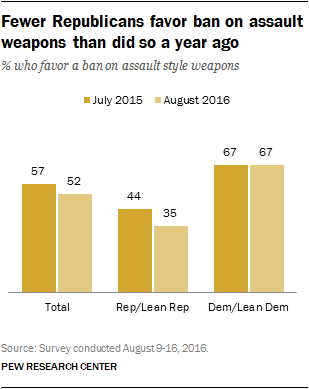 For the most part, opinions on these issues have changed little in recent years, but support for an assault weapons ban has slipped from 57% to 52% since July 2015, with the decline driven by Republicans and Republican-leaning independents.

Democrats’ views are unchanged over the past year: Currently, 67% favor an assault weapons ban, while 32% are opposed. 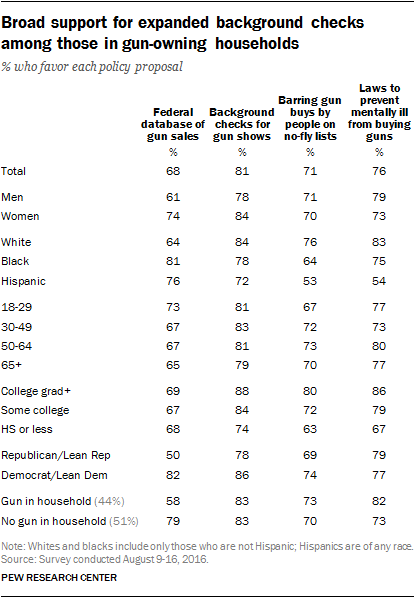 Public support for expanded background checks spans nearly all demographic groups. This also is the case for proposals to prevent the mentally ill – and those on federal no-fly and watch lists – from purchasing guns.

Similarly, there is widespread support for creating a federal database to track gun sales, though more women (74%) than men (61%) favor this. Support also is greater among blacks (81%) and Hispanics (76%) than among whites (64%).

A proposed federal database on gun sales also draws more support from those households in which there are no guns (79%) than among those in gun-owning households (58%). But the differences by gun ownership are modest in views of bans on gun purchases by the mentally ill and those on federal no fly and watch lists. A 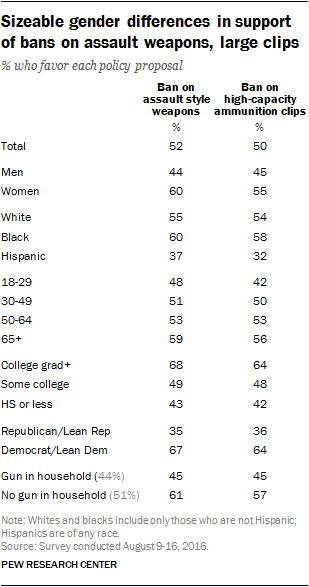 nd identical shares of those in gun-owning and non-gun-owning households favor making private gun sales and sales at gun shows subject to background checks (83% each).

The demographic differences – and differences between gun-owning and non-gun-owning households – are much wider when it comes to bans on assault-style weapons and high-capacity ammunition clips.

Women are more likely than men to favor both of these proposals. And while majorities of college graduates favor bans on assault-style weapons (68%) and high-capacity clips (64%), fewer than half of those who have not completed college say the same (46%, 45%).

Roughly six-in-ten of those in households without guns support bans on assault-style weapons (61%) and high-capacity clips (57%). Among those in gun-owning households, 45% back each of these proposals.

Does gun ownership do more to protect or put safety at risk? 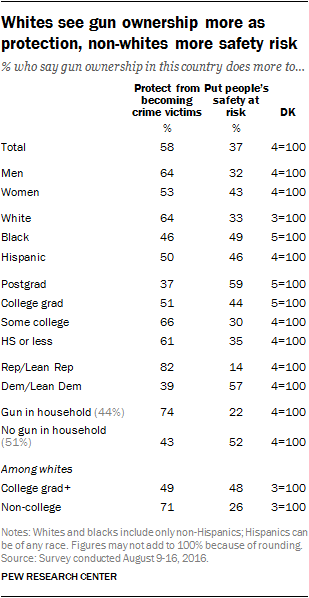 By nearly two-to-one (64% vs. 33%), whites say that gun ownership does more to protect people than to endanger safety. Blacks are evenly divided (49% say it is more of a safety risk vs. 46% who say it protects people from crime).

Adults with postgraduate degrees are the only educational group in which a majority (59%) says that gun ownership does more to put people’s safety at risk than to protect people from crime. Those with college degrees are divided (51% say it protects people from crime, 48% say it is more of a safety risk). By contrast, a solid majority (63%) of those with some college or no college experience see gun ownership more as protection from crime.