Supporters of Hillary Clinton and Donald Trump disagree on a range of policy issues, from terrorism to free trade. Yet they also have more fundamental differences over long-term changes in the country and the next generation’s future prospects.

A new national survey finds that Trump supporters overwhelmingly believe that life in America is worse than it was 50 years ago “for people like them.” Fully 81% of registered voters who support Trump say life has gotten worse, compared with just 11% who say it has gotten better (6% say it is about the same). 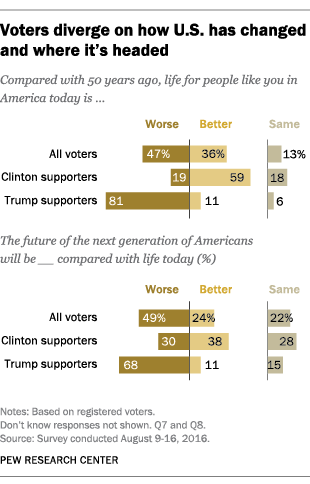 Most Clinton supporters take the opposite view: 59% say life for people like them has gotten better over the past half-century, while 19% think it has gotten worse and 18% see little change.

The latest national survey by Pew Research Center, conducted August 9-16 among 2,010 adults, including 1,567 registered voters, finds little change overall in voters’ views of how the nation has changed and its future prospects since March, during the presidential primaries. But the divisions evident in that survey are striking in the context of the general election.

The current survey finds that Clinton holds a narrow lead over Trump in a four-way test that includes Libertarian candidate Gary Johnson and Green Party nominee Jill Stein: 41% of registered voters say if the election were held today they would support Clinton or lean toward Clinton, 37% would back Trump, 10% favor Johnson and 4% back Stein.

There continue to be stark differences in candidate support across demographic groups. Women back Clinton over Trump by a wide 49% to 30% margin, while men support Trump by 45% to 33%. And there remain pronounced educational divides: Those with postgraduate degrees back Clinton by about three-to-one (59% vs. 21%); among those with some or no college experience, preferences are divided (41% back Trump, 36% Clinton, 9% Johnson and 5% Stein). 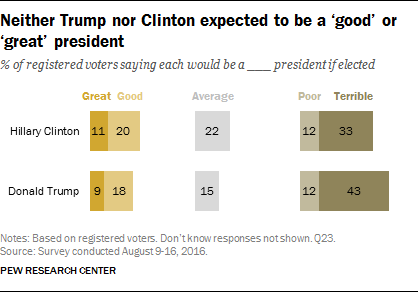 Opinions about how Clinton might do as president are not as negative. Still, only about a third of voters (31%) say she would be a good or great president, while 22% say would be average and 45% think she would be a poor (12%) or terrible (33%) president.

Sizable shares of voters also think there is a distinct possibility that, if elected, either candidate – but especially Trump – would make a serious mistake that would damage the country. More than half of all registered voters (55%) say Trump has a “big chance” of making a major mistake that would hurt the country; 44% of voters say the same about Clinton. 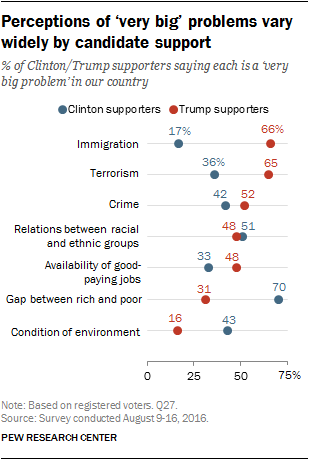 Clinton and Trump supporters are far apart in their perceptions of some of the major problems facing the country. About two-thirds of Trump backers cite immigration (66%) and terrorism (65%) as “very big” problems in the United States. Among Clinton supporters, just 17% say immigration is a very big problem and 36% view terrorism as a major problem.

Trump supporters also are more likely than Clinton supporters to say that crime (52% vs. 42%) and the availability of good-paying jobs (48% vs. 33%) are very big problems.

Voters continue to register opposition to the idea of subjecting Muslims living in the United States to additional scrutiny as part of the federal government’s efforts to combat terrorism. Nearly two-thirds of voters (64%) say that Muslims living in the U.S. should not be subject to greater scrutiny solely because of their religion. Just 30% say Muslims in this country should be subject to more scrutiny than members of other religious groups.

Clinton and Trump supporters take opposing views on this issue, but Clinton supporters are more unified. About eight-in-ten registered voters (82%) who support Clinton for president are opposed to subjecting Muslims living in the U.S. to extra scrutiny. A smaller majority of Trump supporters (57%) favor giving Muslims more scrutiny than people in other religious groups, while 37% oppose this policy.

Foreign trade also has been a contentious issue throughout the 2016 campaign. Currently, 45% of voters say free trade agreements have been a good thing for the United States, while about as many (47%) say they have been a bad thing.

Clinton supporters, by a wide margin (59% to 32%), view free trade agreements positively. An even larger majority of Trump supporters (68%) view them negatively. The pattern is similar in opinions about the proposed Trans-Pacific Partnership trade agreement (TPP), though larger shares of voters do not offer an opinion about the TPP. 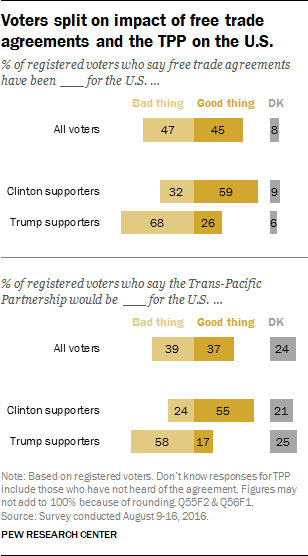 More than half of Clinton supporters (55%) view the TPP as a good thing for the United States, while most Trump supporters (58%) view the proposed trade deal as a bad thing.

Republican opposition to free trade agreements has increased dramatically in the past year. As recently as May 2015, more Republican voters said that free trade agreements had been a good thing for the U.S. (51%) than said they had been a bad thing (39%). Today, 61% say it is bad thing, while just 32% have a positive view. Democrats’ views are little changed over this period.
The survey finds that Barack Obama’s overall approval rating remains positive: Currently 53% of the public approves of his job performance, while 42% disapprove. While voters who support Clinton and Trump diverge over the problems facing the country and how to solve them, they do agree on one thing: Majorities of both Trump supporters (80%) and Clinton supporters (63%) say that if Clinton were to win the presidency, she would continue Obama’s policies.

Nation’s diversity viewed positively. A majority of registered voters (57%) say an increasing number of people of many different races and ethnic groups and nationalities makes the country a better place to live, while about a third (34%) say it makes no difference and 8% say it makes the U.S. a worse place to live. Clinton supporters (72%) are far more likely than Trump supporters (40%) to view the nation’s increasing diversity positively.

Next: 1. Voters’ general election preferences
← Prev Page
You are reading page1Page2Page3Page4Page5Page6Page7Page8
Next Page →

Clinton, Trump Supporters Have Starkly Different Views of a Changing Nation
Where candidates’ supporters stand on key issuesOther important findings
1. Voters’ general election preferences 2. Perceptions of the presidential candidates 3. Views of the country and feelings about growing diversity 4. How voters view the country’s problems 5. Issues and the 2016 campaign 6. Views of Barack Obama and the political parties Methodology