Recent comments by presidential candidate Rick Santorum have brought renewed attention to the role of religion in politics. In both 2010 and 2008, narrow majorities said that churches and other houses of worship should keep out of political matters rather than express their views on social and political questions, according to polls by the Pew Research Center for the People & the Press and the Pew Forum on Religion & Public Life. 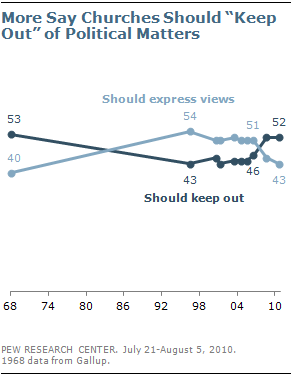 That represented a change from earlier in the 2000s and the 1990s, when more Americans supported churches and other houses of worship speaking out on political matters. However, opinions in 201o were nearly identical to those in a 1968 Gallup survey, when 53% said churches should keep out of political matters.

While support for churches’ involvement in politics has fluctuated, there has been consistent agreement over the years that houses of worship should not directly endorse political candidates. In 2010, 70% said churches and other houses of worship should not come out in favor of one candidate over another; just 24% say they should. These opinions have changed little over the past decade. 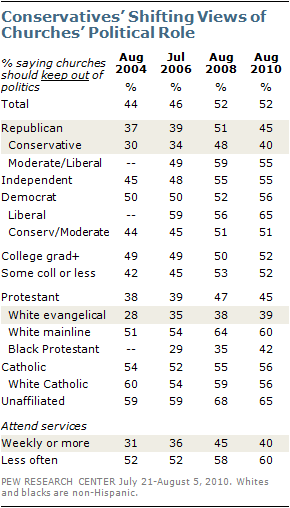 From 2004 to 2008, there was a sharp increase in the percentage of Americans saying that churches and other houses of worship should keep out of political matters. Notably, much of this change came among conservatives. (See “More Americans Question Religion’s Role in Politics,” Aug. 21, 2008.) 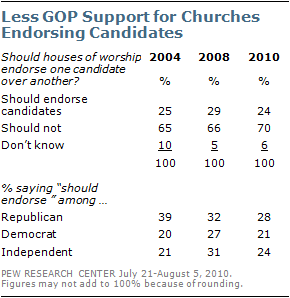 The percentage of Republicans supporting endorsements by churches has declined – from 39% in 2004 to 28% in 2010. Opinions among Democrats and independents have shown less change. In 2010, 21% of Democrats and 24% of independents favored churches endorsing candidates. 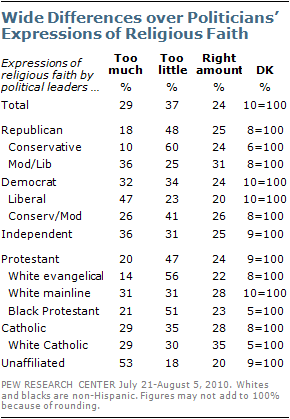 Republicans have long been more likely than Democrats to say there is too little expression of religious faith by political leaders. But both parties are divided over this issue.

Since 2003, the GOP has consistently been viewed as more friendly to religion than the Democ 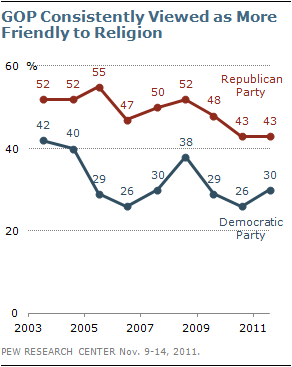