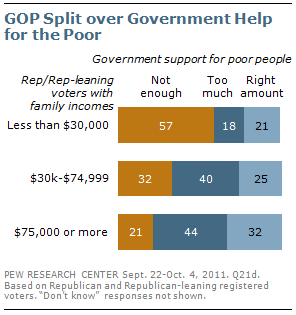 Mitt Romney’s statement that he is focused solely on the problems of middle class Americans, not the poor, may not sit well with lower-income voters within his own party. Roughly a quarter of Republican and Republican-leaning registered voters have annual family incomes under $30,000, and most of them say that the government does not do enough for poor people in this country.

In a Pew Research Center survey conducted in early October, 57% of lower-income Republican and Republican-leaning voters said the government does too little for poor people. Just 18% said it does too much. 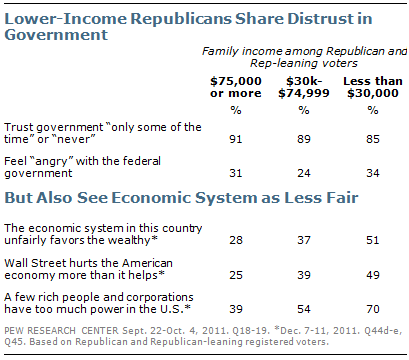 By contrast, higher-income Republicans took the opposite view; by roughly two-to-one (44% to 21%) Republicans with incomes of $75,000 or more said the government does too much, not too little, for poor people.

This is not to say that lower-income Republicans have a better view of the federal government generally. They are just as distrustful of government and angry at government these days as are higher-income Republicans. But in a December 2011 poll, lower-income Republicans expressed a decidedly different view about the fairness of the economic system than did those with higher incomes. Republicans and GOP leaners with family incomes of less than $30,000 were much more likely than those with incomes of $75,000 or more to say the economic system unfairly favors the wealthy, that Wall Street does more harm than good, and that a few rich people and corporations have too much power.