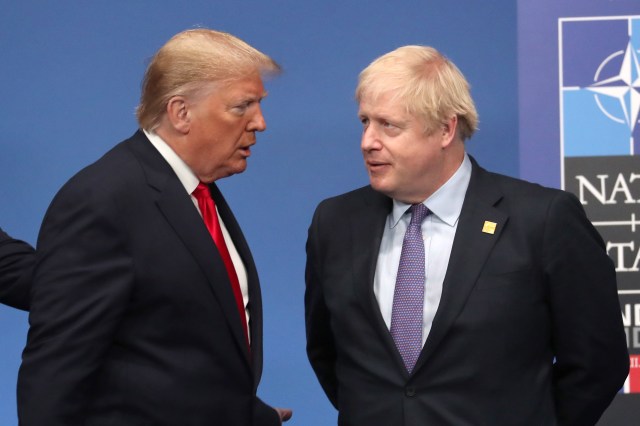 HERTFORD, ENGLAND – DECEMBER 04: US President Donald Trump and British Prime Minister Boris Johnson onstage during the annual NATO heads of government summit on December 4, 2019 in Watford, England. France and the UK signed the Treaty of Dunkirk in 1947 in the aftermath of WW2 cementing a mutual alliance in the event of an attack by Germany or the Soviet Union. The Benelux countries joined the Treaty and in April 1949 expanded further to include North America and Canada followed by Portugal, Italy, Norway, Denmark and Iceland. This new military alliance became the North Atlantic Treaty Organisation (NATO). The organisation grew with Greece and Turkey becoming members and a re-armed West Germany was permitted in 1955. This encouraged the creation of the Soviet-led Warsaw Pact delineating the two sides of the Cold War. This year marks the 70th anniversary of NATO. (Photo by Steve Parsons-WPA Pool/Getty Images)