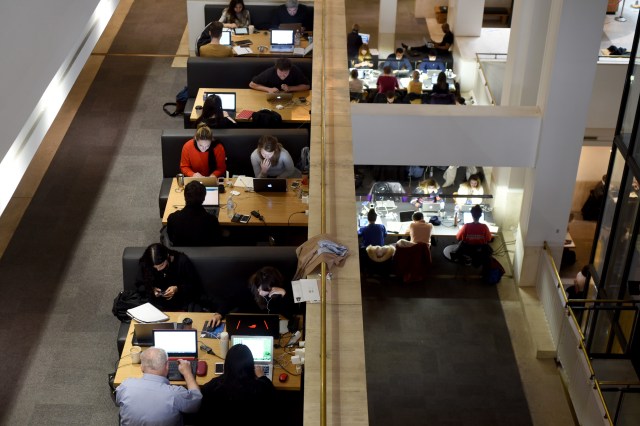 LONDON, UNITED KINGDOM – MARCH 23: A photo taken on March 23, 2018 shows people with their laptops at the British Library within the “World Book Day” in London, United Kingdom. The British Library is the national library of the United Kingdom and the second largest library in the world by number of items. The collection includes well over 150 million items. World Book Day is an annual event on April 23rd, organized by the United Nations Educational, Scientific and Cultural Organization (UNESCO), to promote reading, publishing and copyright. British Library was formed by King George III of Great Britain in 1753. The Library also has a stamp collection, total of 8 millions. Length of the shelves in the British Library reach 625 km. (Photo by Kate Green/Anadolu Agency/Getty Images)

Largest libraries in the world : British Library in London
So far, Trump has granted clemency less frequently than any president in modern history
How people around the world see the U.S. and Donald Trump in 10 charts
Quiz: Where do you fit in the political typology?
In past elections, U.S. trailed most developed countries in voter turnout
5 facts about the QAnon conspiracy theories