Posts about the Biden administration were collected from CrowdTangle, a public insights tool owned and operated by Facebook. CrowdTangle gives academic and other researchers access to public posts in their database that match keywords that the researcher supplies in their query.

Researchers developed the list of public pages and posts to study using a multistep process.

To determine which public pages to include in this analysis, researchers first conducted a keyword search for the term “Biden” across the first three months of 2021 across all public pages in the CrowdTangle database. After removing posts that had a total view count of zero (i.e., were never viewed), this resulted in roughly 11,510 unique pages (although 11,510 pages were found, the number may change slightly as pages become private or otherwise stop being available).

Researchers first examined the 100 pages with the highest average monthly interactions. We removed pages that were based outside the United States, were already studied in the most recent report about coverage on TV, radio and web outlets, or did not have a clear current affairs focus. In the end, this analysis is based on the top 25 pages according to average monthly interactions, which were a mix of pages from political actors and organizations, commentators, and news outlets. The Facebook pages studied were:

All posts from these 25 pages from the time period March 8-14, 2021, were considered for this analysis, for a total of 5,458 posts. Each post was analyzed by trained human coders to determine if it was about the administration. Only the post message and embedded image, link headline and image, and the first 10 minutes of any video embedded in the post were used to make this determination. A total of 1,226 posts met these criteria and formed the basis of this study.

This study conducted a content analysis on two levels: at the page level, the ideological orientation of the page as it describes itself; and at the post level, a series of variables that help characterize the coverage of the administration.

The 25 pages were coded for one variable:

Five human coders examined these posts and coded them for four variables, which are largely similar to those in the recent study about news coverage of the Biden administration. In conducting this analysis, only the post message (including any embedded posts) and embedded image, link headline and image, and the first 10 minutes of any video embedded in the post were considered. Because the same variables, protocols and coders were used for this study as the most recent one and content analysis was conducted soon after it was completed for that study, an additional round of intercoder reliability was not performed (see here for previous intercoder reliability estimates). However, to ensure consistency, coders underwent an additional training in order to be refreshed on all the rules and familiarize themselves with the format of the Facebook post.

The 1,226 posts from these pages were coded for the following four variables:

An additional variable, linked source, was analyzed using a custom Python script, and refers to the domain that was linked to in the post.

These 1,226 posts were examined for each of these variables and compared with the 228 stories from the main study that were published during the same time period.

Data in this report is drawn from the panel wave conducted March 8 to March 14, 2021. A total of 12,045 panelists responded out of 13,540 who were sampled, for a response rate of 89%. This does not include five panelists who were removed from the data due to extremely high rates of refusal or straightlining. The cumulative response rate accounting for nonresponse to the recruitment surveys and attrition is 4%. The break-off rate among panelists who logged on to the survey and completed at least one item is 1%. The margin of sampling error for the full sample of 12,045 respondents is plus or minus 1.5 percentage points. 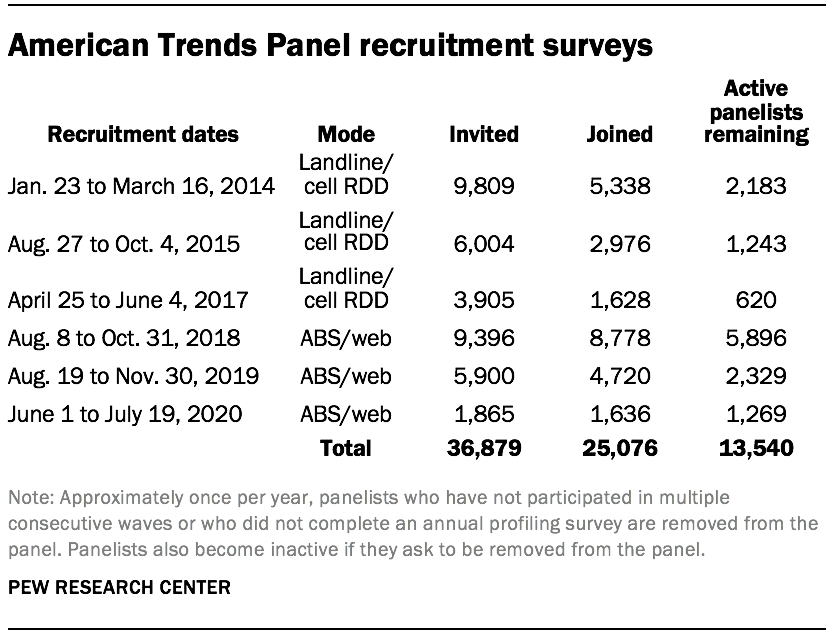 In August 2018, the ATP switched from telephone to address-based recruitment. Invitations were sent to a random, address-based sample of households selected from the U.S. Postal Service’s Delivery Sequence File. Two additional recruitments were conducted using the same method in 2019 and 2020, respectively. Across these three address-based recruitments, a total of 17,161 adults were invited to join the ATP, of whom 15,134 (88%) agreed to join the panel and completed an initial profile survey. In each household, the adult with the next birthday was asked to go online to complete a survey, at the end of which they were invited to join the panel. Of the 25,076 individuals who have ever joined the ATP, 13,540 remained active panelists and continued to receive survey invitations at the time this survey was conducted.

The U.S. Postal Service’s Delivery Sequence File has been estimated to cover as much as 98% of the population, although some studies suggest that the coverage could be in the low 90% range.1The American Trends Panel never uses breakout routers or chains that direct respondents to additional surveys.

The data collection field period for this survey was March 8 to 14, 2021. Postcard notifications were mailed to all ATP panelists with a known residential address on March 8, 2021.

On March 8 and March 9, invitations were sent out in two separate launches: Soft Launch and Full Launch. Sixty panelists were included in the soft launch, which began with an initial invitation sent on March 8. The ATP panelists chosen for the initial soft launch were known responders who had completed previous ATP surveys within one day of receiving their invitation. All remaining English- and Spanish-speaking panelists were included in the full launch and were sent an invitation on March 9.

To ensure high-quality data, the Center’s researchers performed data quality checks to identify any respondents showing clear patterns of satisficing. This includes checking for very high rates of leaving questions blank, as well as always selecting the first or last answer presented. As a result of this checking, five ATP respondents were removed from the survey dataset prior to weighting and analysis. 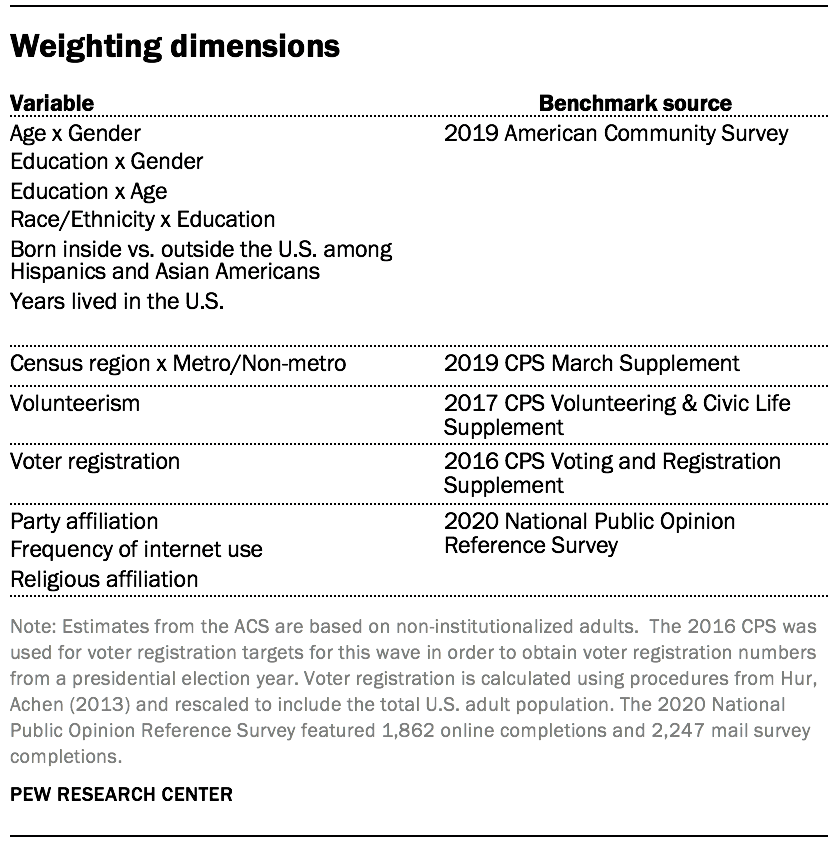