This report studies the impact of the coronavirus outbreak on the financial fortunes of the U.S. news media industry. It analyzes financial data using methods similar to our state of the news media fact sheets. In all cases, revenue is not adjusted for inflation.

Data on newspapers and local TV news comes from Securities and Exchange Commission filings of publicly traded media companies. Only companies in each sector that reported quarterly financial information for the quarter ending June 30, 2020, are included (six for newspapers, five for local TV); see detailed tables for list of companies. Together, these companies own over 300 daily newspapers and over 600 local TV stations. (Consequently, the results for individual newspapers or stations largely cannot be reported.) Publicly traded companies that own newspapers or local TV stations but did not report the details of these stations’ revenue (e.g., ad revenue) are not included.

Data is reported at the individual company level, and when summarizing across companies, median results (i.e., the midpoint when ordering all companies from highest to lowest) are reported. Year-over-year changes are reported – largely comparing the second quarter of 2020 with the second quarter of 2019 – to avoid capturing seasonal fluctuations in economic activity. Figures from a given year are as reported in the quarterly filing that year; revised figures included in subsequent years’ filings are not used.

For both newspaper and local TV news companies, there were many mergers and acquisitions over the 14 years studied here, and so a rise in revenue for a particular company may, in some cases, reflect the company acquiring additional media properties in a merger or purchase. For 2020, however, efforts were made when possible to ensure a valid year-over-year comparison with 2019. Lee Enterprises completed its acquisition of Berkshire Hathaway’s newspaper group in March 2020, and so “same-store” numbers – which indicate what revenue would have been without the acquisition – are used for 2020. New Media and Gannett merged in late 2019, keeping the name Gannett, and so for all prior years, revenue for Gannett and New Media are combined (and are referred to as “Gannett” throughout).

In the local TV category, Nexstar merged with Tribune in September 2019, and so for 2020, revenue from acquisitions has been backed out to calculate what revenue would have been without the acquisition of these additional stations.

Data on cable and network TV news comes from Kantar. Since this data encompasses the universe of major cable and network TV news providers, revenue figures can be summed across the three networks (for cable, Fox News, CNN and MSNBC, and for network, ABC, CBS and NBC) to be summarized as total revenue across the sector (not as medians). The networks can also be analyzed individually.

Quarterly data is not available for radio, public broadcasting or digital news companies.1 In the Hispanic media sector, results are available for Univision, but they are not included here to avoid focusing exclusively on one organization. 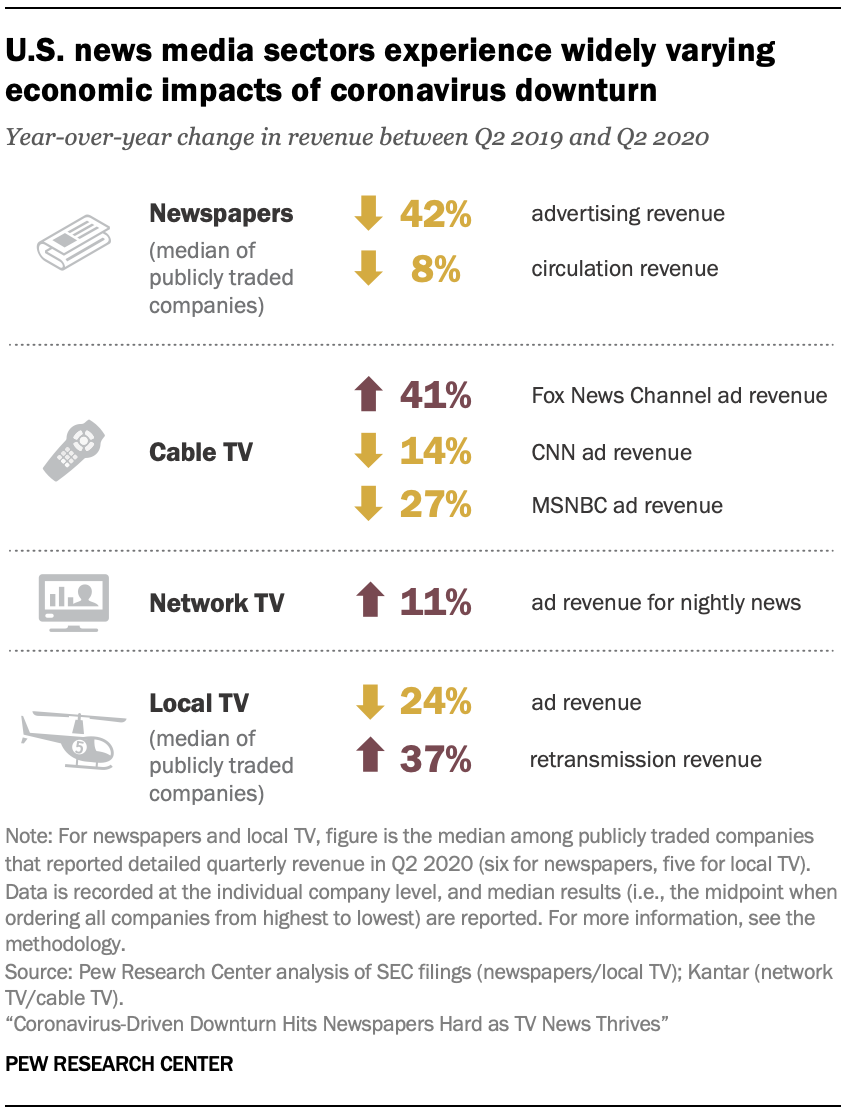 The coronavirus outbreak has had a major impact on the U.S. economy, wiping out five years of growth in the second quarter of 2020.2 The news media have responded to these financial pressures with new closings and layoffs, adding to those that have already occurred over the last several years – though the government’s paycheck protection loans program may have provided some relief. But not all sectors, or organizations, have been affected equally.

Newspaper companies have been hit especially hard. Among the six publicly traded newspaper companies studied – major chains that own over 300 daily papers – advertising revenue fell by a median of 42% year over year (i.e., comparing the second quarter of 2020 with the second quarter of 2019).3 By contrast, total ad revenue across the three major cable news networks was steady overall, but there were sharp differences between the networks: While ad revenue for MSNBC and CNN declined by double digits, Fox News Channel’s revenue rose by 41%.

The median is the middle number in a list of figures sorted in ascending or descending order. For instance, the median of [1, 2, 3, 5, 8] is 3. If there are an even number of figures, the median is halfway in between the middle two figures; the median of [1, 4, 6, 7] is 5. In this report, revenue totals for newspaper and local TV companies were not combined to calculate an industry total. Instead, the changes at each individual company were calculated, and the median of these year-over-year changes was taken as described above. Throughout this report, the median year-over-year change is reported as a way of summarizing the revenue picture among the publicly traded companies analyzed in each sector (six for newspapers, five for local TV). Since each company represents a different number of news outlets (e.g., Belo represents one newspaper while Gannett represents dozens), taking the average would represent a skewed summary.

Ad revenue for the five local TV news companies studied (which together own or operate at least 600 individual stations) was also down in the second quarter of this year, but increases in retransmission fees more than made up for this.4 Meanwhile, ad revenue for nightly network TV news at the three broadcast networks (ABC, CBS and NBC) increased over the same period, as audiences have been turning to TV in record numbers for news about the outbreak.5

The rest of this report looks at each of these four sectors of the news industry in more detail.

U.S. newspapers have been in a long economic downturn. While some national newspaper brands have reported audience growth in recent years, the industry overall (which extends to hundreds of local papers throughout the country) experienced a sharp decline in ad revenue amid the Great Recession and has yet to recover. 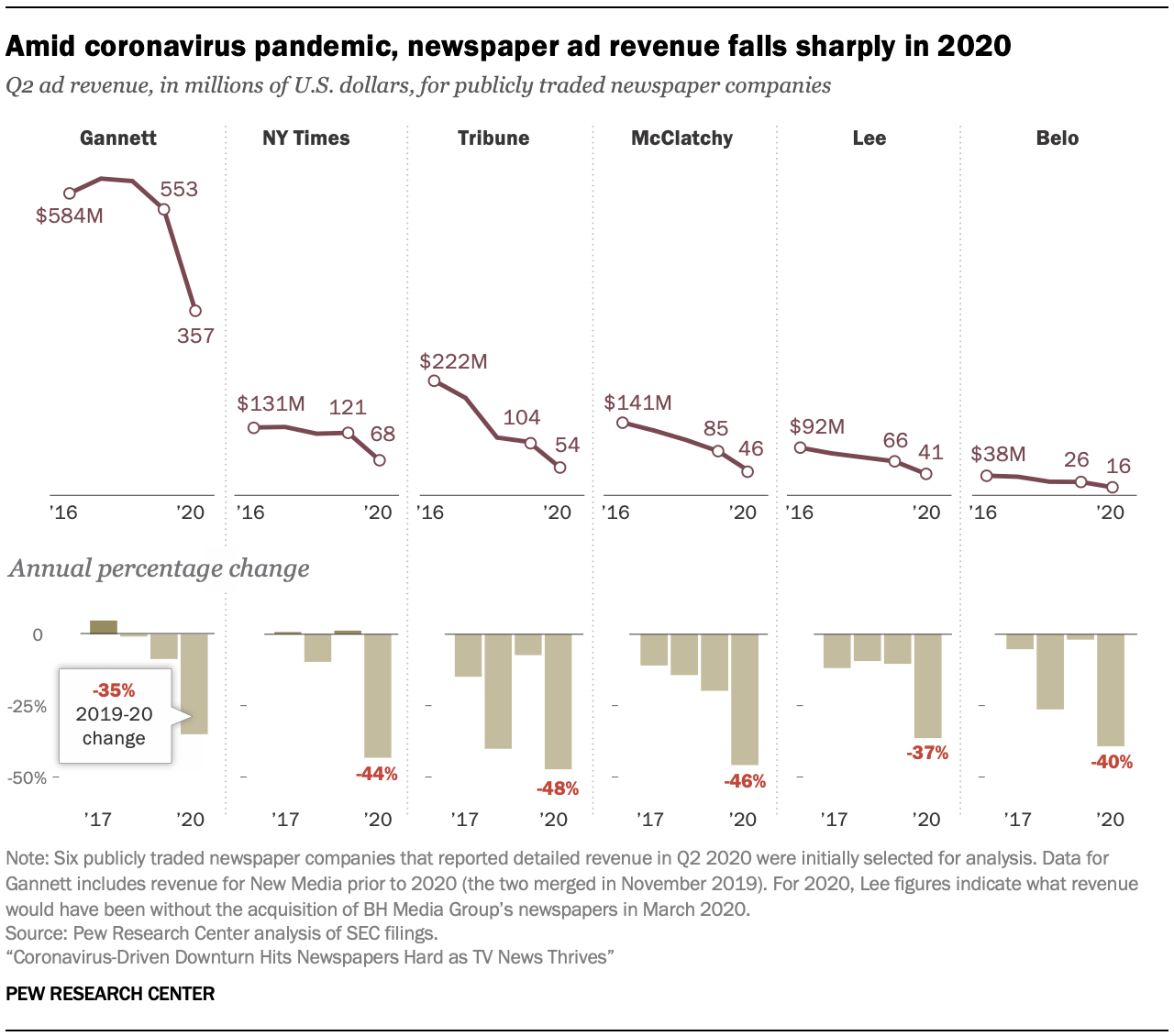 Ad revenue historically has been the industry’s biggest single revenue stream, although many newspapers have made efforts in recent years to orient their business models more around revenue directly from readers – such as through online or print subscriptions. Despite this, overall circulation and subscription revenue has barely budged over the past 10 years.

Now, with the coronavirus-driven downturn, the six publicly traded newspaper companies analyzed here (which collectively own over 300 newspapers) have seen a year-over-year fall in both types of revenue.6

The median ad revenue among these publicly traded newspaper companies fell by 42% in the second quarter of 2020 when compared with the second quarter of 2019. This pattern was similar for all six newspaper companies analyzed here, with even the least-affected company, Gannett, showing a 35% decline in ad revenue year over year.

Digital ads represent a newer source of revenue for newspapers as their overall circulation declines. Such ads can reach not only subscribers, but visitors to the free offerings on newspapers’ websites. But digital ad revenue offered little relief in the early days of the pandemic. Digital ad revenue fell by a median of 32% year over year in the second quarter. (See Appendix for detailed tables with full data.)

Circulation revenue, which has been steady in recent years, declined in Q2 2020, though by a median of only 8%. Even at the worst-hit companies (Gannett and Lee), circulation revenue declined by a relatively low 14%. As a result, three of these six companies now have more revenue coming in from circulation than from ads – an unthinkable state of affairs a decade ago, when overall ad revenue was two-and-a-half times higher than overall circulation revenue. 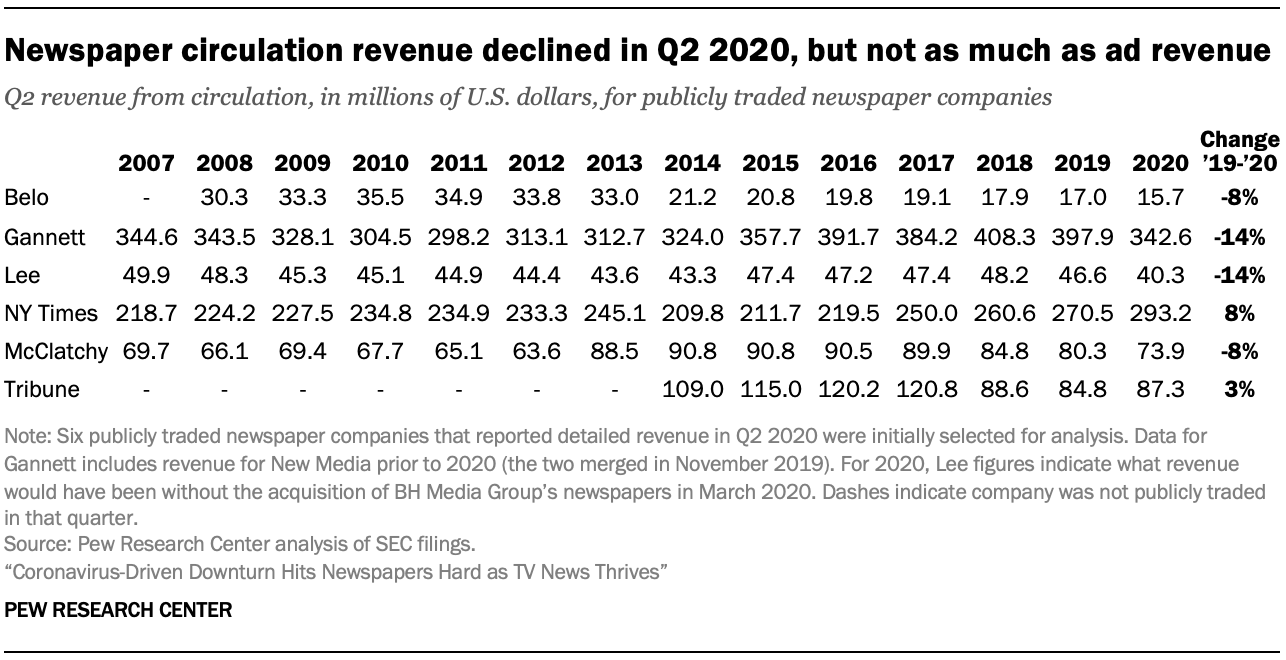 In percentage terms, newspaper companies that reported revenue in both periods seemed to fare worse financially this spring than they did during the Great Recession of December 2007 through June 2009. Ad revenue for newspaper companies also dipped sharply during the Great Recession, with median declines of 11% and 30%, respectively, in the second quarters of 2008 and 2009 among these companies (see Appendix for detailed tables).7 Still, this does not match the dramatic year-over-year median fall of 42% in the second quarter of 2020. And circulation revenue was roughly steady in 2008 and 2009, compared with the 8% median year-over-year decline in the second quarter of 2020.

Some newspaper companies have turned to other sources of revenue to fill the gap left by falling ad revenue. This includes revenue from events, marketing services, commercial printing, affiliate fees from product recommendations, and – for The New York Times, at least – television shows. But these sources did not offer much help in the second quarter of 2020, as most companies saw their “other” revenue decline by double digits. This was especially notable for the Times, which experienced substantial year-over-year increases in this “other” revenue in the second quarters of 2018 and 2019 (40% and 30%, respectively) before a 5% drop in that period in 2020.8

In a time of falling revenue, companies may be moved to cut expenses – such as payroll. Of the four companies that reported compensation expenses in the second quarter of 2020, all showed a double-digit percentage decline year over year, with a median decline across the four of 20 percentage points.9 For most of these companies, this figure has been falling steadily over the past decade or more, reflecting the 51% decline in newspaper newsroom jobs between 2008 and 2019. 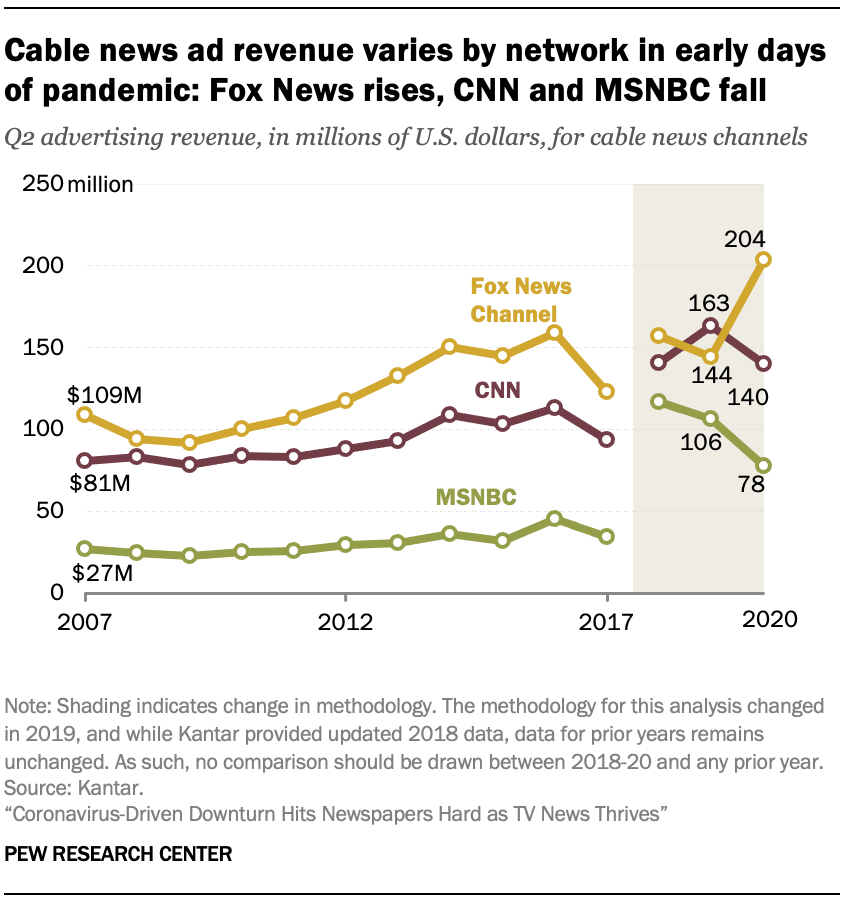 But the story was very different depending on the network. Fox News Channel, driven by surging ratings, experienced its sharpest year-over-year second-quarter ad revenue increase going back to 2007, rising 41%.10 But CNN and MSNBC both saw their ad revenue decline, with CNN’s falling 14% and MSNBC’s falling 27% – despite the fact that both networks grew their audiences as well, with CNN more than doubling its total primetime audience over the year prior. In other words, with many people subject to stay-at-home orders in the spring, Americans were watching cable TV news in greater numbers. But this did not lead to greater revenues across the board – which could be due to a number of factors.11

Among five publicly traded local TV companies that reported detailed revenue in the second quarter of this year, ad revenue fell by a median of 24%. Together, these companies own or operate over 600 stations across the U.S. 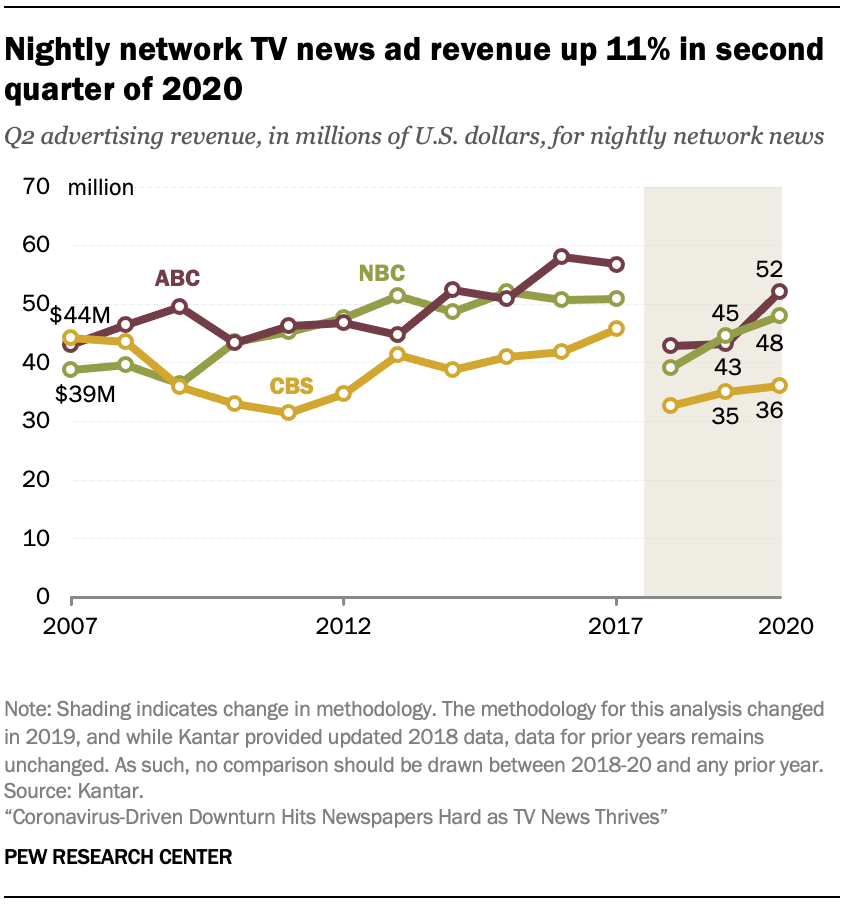 Audiences have been turning to the network nightly news in record numbers during the coronavirus outbreak, outpacing even cable’s gains, so it is not surprising that network TV news advertising revenue has increased as well. 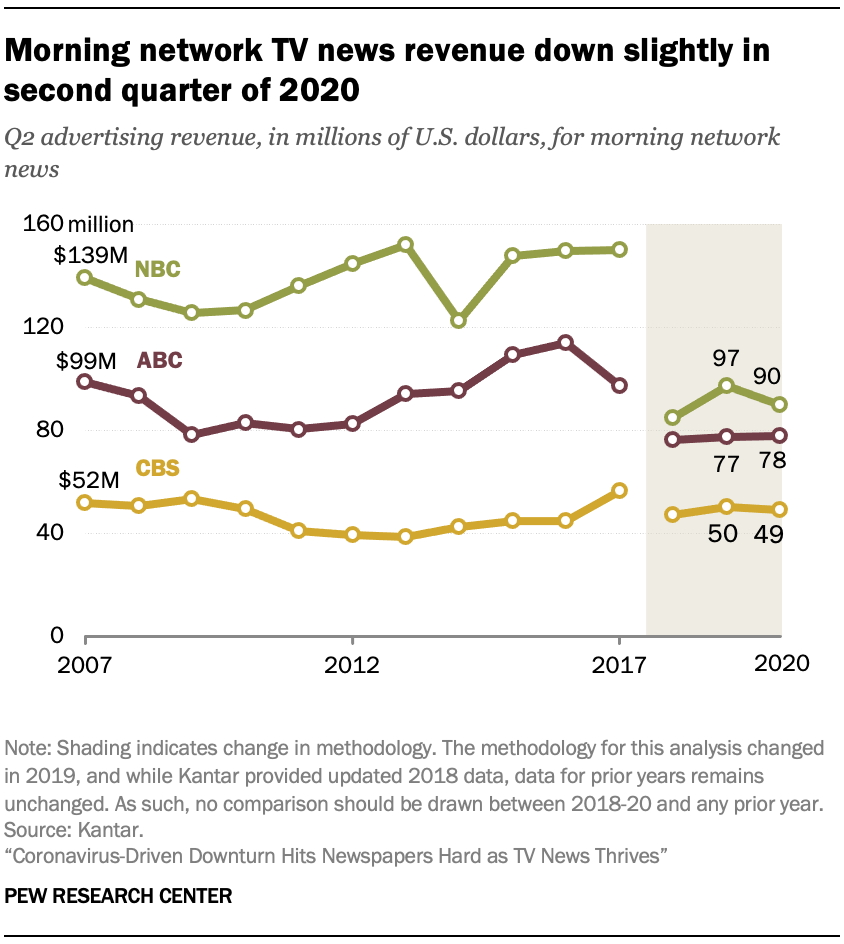 The story has been different for network morning news shows. Total ad revenue across the three networks fell 4% year over year in the second quarter, which is somewhat unusual compared with the presidential election years of 2016 (up 2% year over year) and 2012 (up 4%). ABC’s ad revenue was roughly unchanged, while CBS and NBC experienced modest declines in the second quarter of 2020.13

Next: Appendix: Detailed tables
← Prev Page
You are reading page1Page2Page3
Next Page →