Pew Research Center’s American News Pathways project conducted this study to understand how Americans are engaging with and perceiving news coverage of the COVID-19 pandemic. 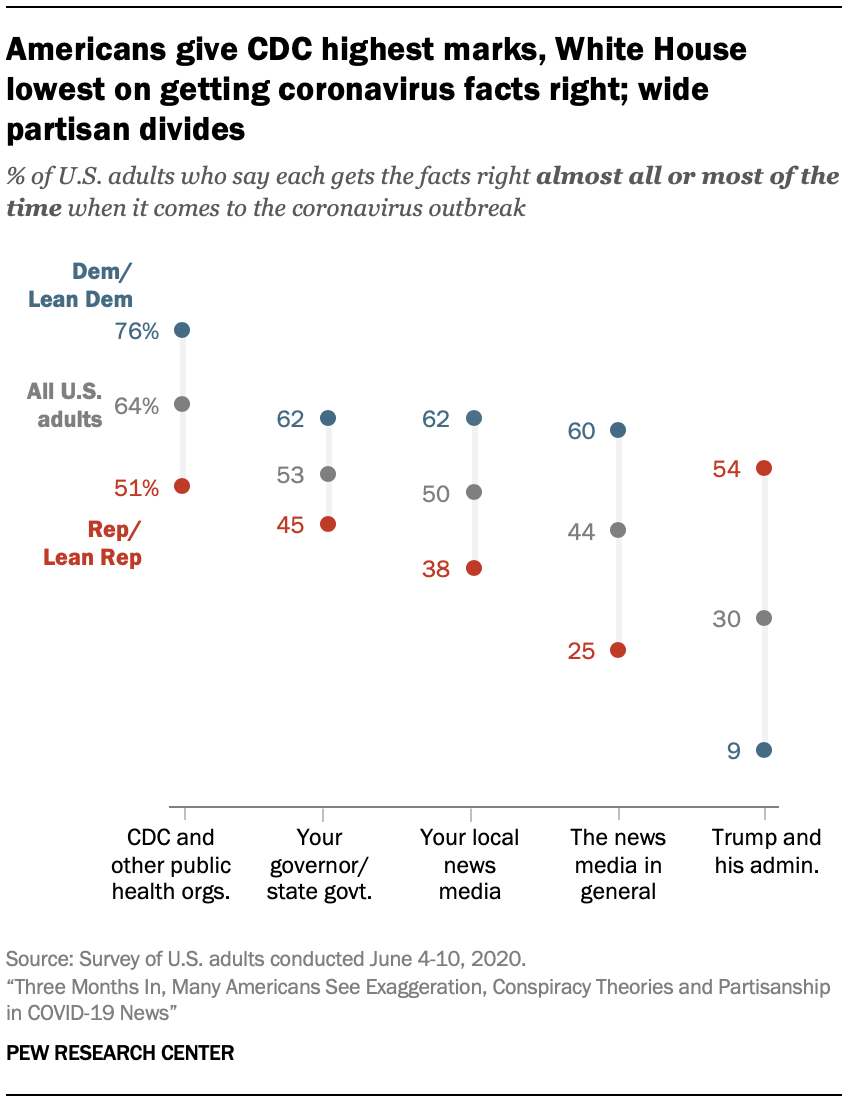 As Americans continue to process a steady flow of information about the coronavirus outbreak – from changing infection and death rates to new testing protocols and evolving social distancing guidelines – they give the Centers for Disease Control and Prevention and other public health organizations the highest rating when it comes to getting the facts right. And they give Donald Trump and his administration the lowest rating for “getting the facts right” among five key sources of COVID-19 information, according to a Pew Research Center survey of 9,654 U.S. adults conducted June 4-10, 2020, as part of the American News Pathways project.

Nearly two-thirds of U.S. adults (64%) say the CDC and other public health organizations get the facts right “almost all” or “most” of the time when it comes to the coronavirus outbreak, while about half as many (30%) say the same about President Trump and his administration. Instead, a solid majority of Americans (65%) say the White House gets the facts right only “some of the time” (29%) or “hardly ever” (36%).

Republicans and Democrats disagree sharply on how often each of these five sources for news and information gets the facts about the coronavirus outbreak right. Majorities of Democrats and independents who lean toward the Democratic Party say the CDC and other health groups (76%), governors and state governments (62%), local news media (62%) and the national news media (60%) usually get the facts right. Just 9% of Democrats say this about Trump and his administration. It’s a different story among Republicans and Republican leaners: About half of Republicans (54%) say Trump and the White House get the facts right at least most of the time – about on par with how many say the same about the CDC (51%). Republicans are less likely to say the same of governors and state governments (45%), the local news media (38%) and the news media in general (25%).

Increasing shares of Americans, led by Republicans, believe the outbreak has been overblown; level of attention to COVID-19 news has dropped

From late April, when the pandemic dominated the national news conversation, to early June, when demonstrations to protest the death of George Floyd began getting widespread attention, the share of Americans who say the coronavirus outbreak has been exaggerated – i.e., “has been made a bigger deal than it really is” – increased from about three-in-ten (29%) to nearly four-in-ten (38%).

The increase is particularly stark among Republicans: Just under half (47%) said this in late April, compared with nearly two-thirds (63%) in early June. The share of Democrats who say the outbreak has been overhyped increased just slightly, from 14% to 18%. 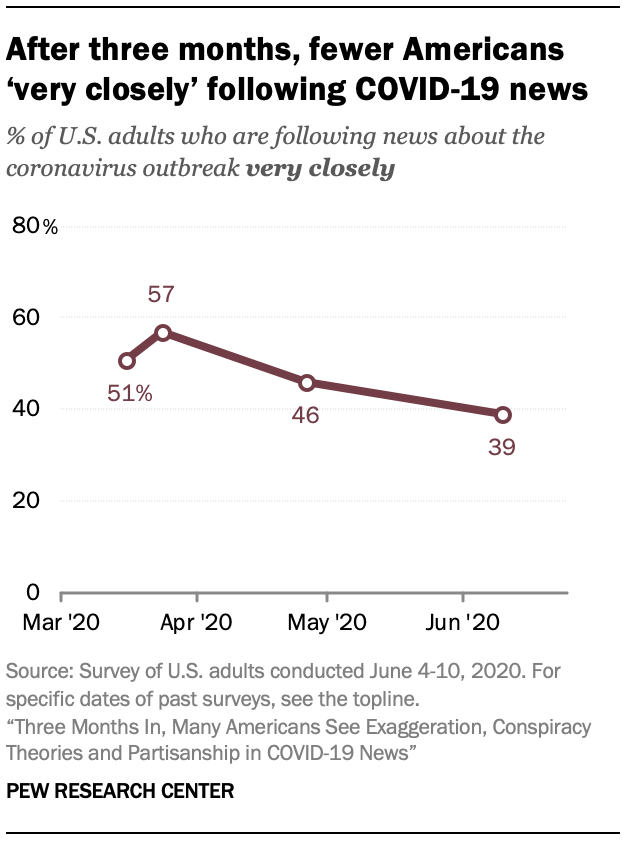 Still, the overwhelming majority of Americans (86%) continue to follow news about the outbreak at least “fairly” closely, a figure that has remained largely stable since mid-March (when 89% said the same).

Compared with the first weeks of the outbreak, many Americans are seeing more partisan viewpoints and struggling to know what is true about COVID-19 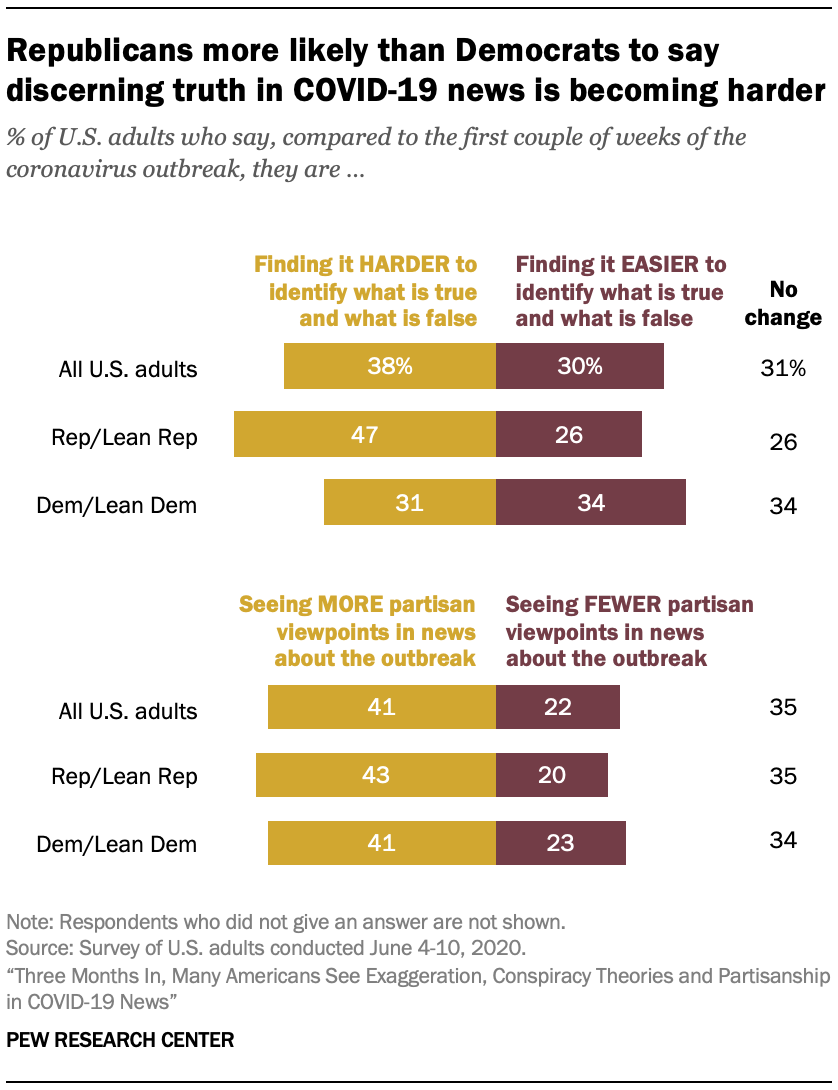 As the U.S. hits about three months since the first cities and states ordered residents to stay at home to help slow the spread of the coronavirus, many Americans are finding it more difficult to separate fact from fiction about the outbreak. A plurality (38%) say that, compared with the first couple of weeks of the outbreak, they now find it harder to identify what is true and what is false, while three-in-ten say they are finding this easier to do. Another 31% say the difficulty of parsing truth from fiction has not changed.

A greater share of Republicans (47%) than Democrats (31%) say it is now harder to tell what is true. Substantial – and roughly equal – shares of both parties, however, say they are now seeing more partisan viewpoints in news about the outbreak than they were in the initial weeks (43% of Republicans and 41% of Democrats). Overall, about four-in-ten U.S. adults (41%) say news about the outbreak is now more partisan than at the start, while fewer say partisanship in coronavirus news has declined (22%). 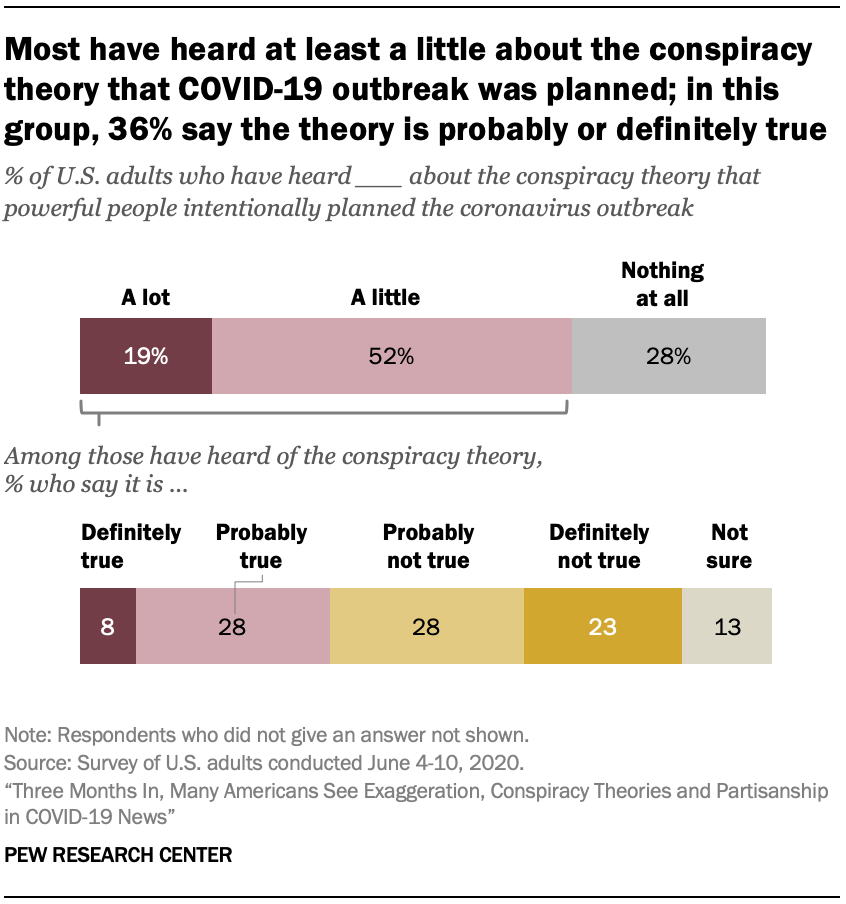 About half of those who have heard about it say this conspiracy theory is “probably not” (28%) or “definitely not” true (23%), while an additional 13% say they are not sure.

Republicans and Democrats are about equally likely to have heard about the conspiracy theory that powerful people planned the pandemic, but Republicans are much more likely to see truth in it (see Chapter 3). 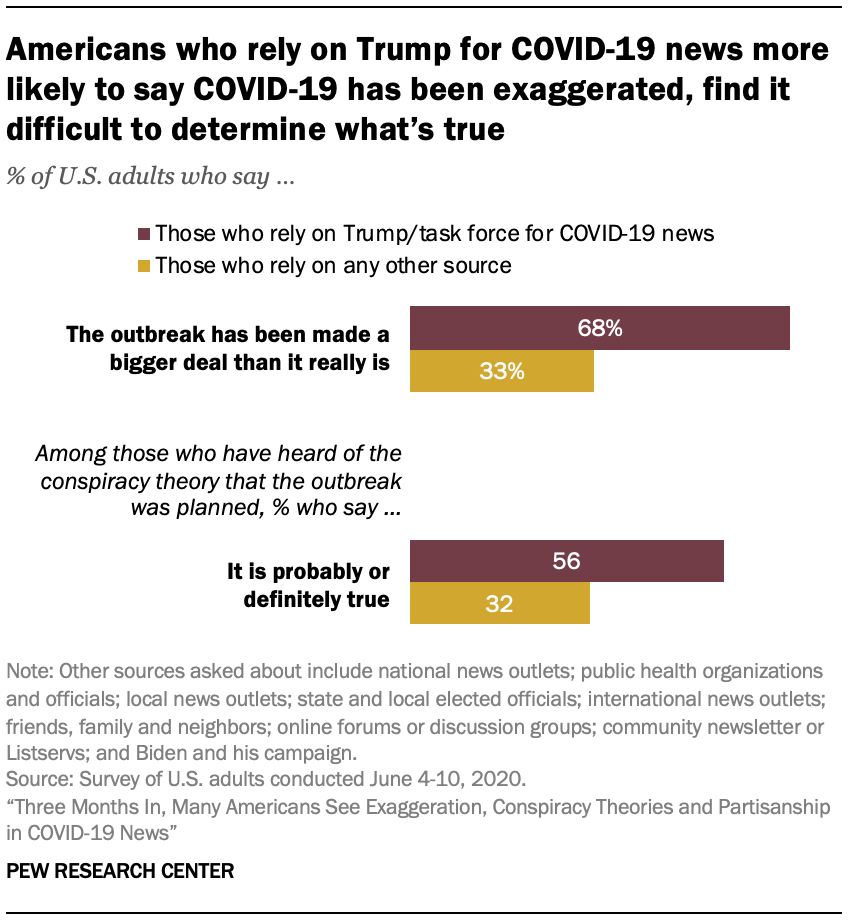 Among five sources examined here that respondents said they rely on most for COVID-19 news, the sense that the coronavirus outbreak has been exaggerated is particularly prevalent among those who say they rely most on Donald Trump and the White House task force for relevant news and information. (The five types of sources looked at here included national news outlets, public health organizations and officials, local news outlets, Donald Trump and the White House coronavirus task force, and state and local elected officials – to allow further analysis of those groups. See here for more details.)

Of those who said they rely most on Trump and the White House for news about the outbreak, fully 68% say that the coronavirus has been “made a bigger deal than it really is.” No more than four-in-ten of those who rely on any of the other sources say the virus and its impact have been blown out of proportion.

Nearly all of those U.S. adults who say Trump is their primary information source are Republicans (fully 92%), yet even compared with others within their party, they stand out. Republicans who rely on the president for COVID-19 news are 11 percentage points more likely than Republicans who turn mostly to other sources to say the outbreak has been exaggerated (71% vs. 60%).

Among all U.S. adults, the group that relies most on Trump for COVID-19 news and information also stands out in its belief in the conspiracy theory that the outbreak was planned: 56% of those in this group who have heard about the theory say it is definitely or probably true. The share who think this conspiracy theory could be true is lower in all the other news consumption groups studied, including just a quarter or fewer among those who primarily rely on the CDC or national news outlets (among those who have heard about the theory; see Chapter 3). 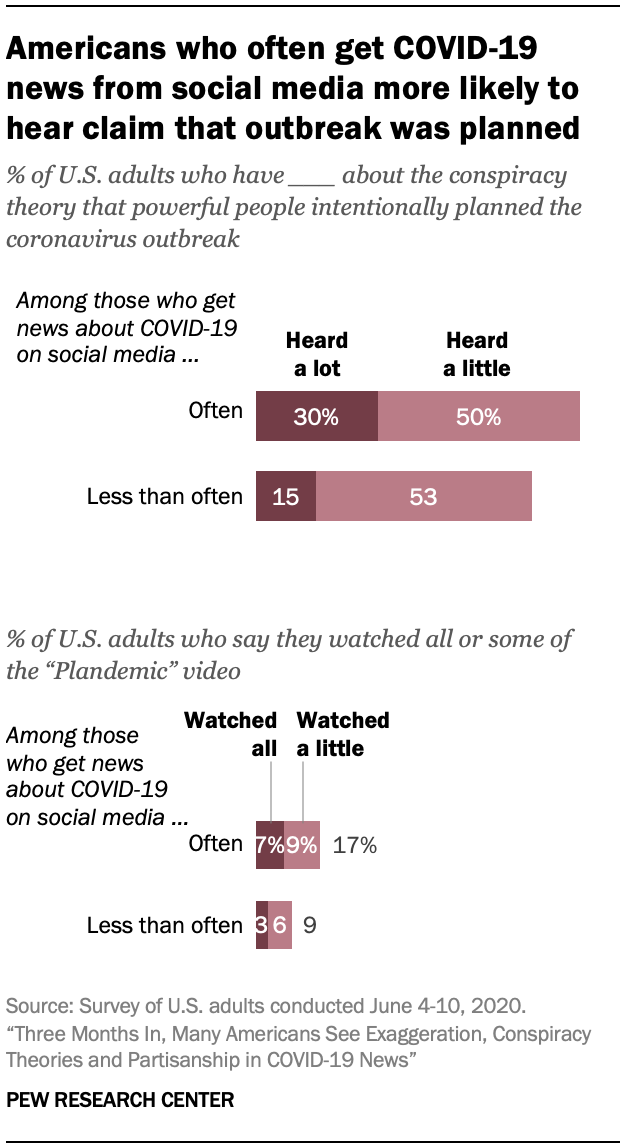 Compared with other Americans, adults who “often” use social media to get news about COVID-19 report higher levels of exposure to the conspiracy theory that the pandemic was intentionally planned.

Next: 1. Americans rate CDC highly, Trump and his administration poorly on getting the facts right about COVID-19
← Prev Page
You are reading page1Page2Page3Page4Page5Page6
Next Page →

Three Months In, Many Americans See Exaggeration, Conspiracy Theories and Partisanship in COVID-19 News
1. Americans rate CDC highly, Trump and his administration poorly on getting the facts right about COVID-19 2. Americans still follow COVID-19 news, though with less intensity; many say this news is becoming more political 3. Most Americans have heard of the conspiracy theory that the COVID-19 outbreak was planned, and about one-third of those aware of it say it might be true Acknowledgments Methodology