Everyone who took part in the survey is a member of Pew Research Center’s American Trends Panel, an online survey panel that is recruited through national, random sampling of residential addresses. Recruiting our panelists by phone or mail ensures that nearly all U.S. adults have a chance of selection. This gives us confidence that any sample can represent the whole population (see our Methods 101 explainer on random sampling). To further ensure that each survey reflects a balanced cross section of the nation, the data is weighted to match the U.S. adult population by gender, race, ethnicity, partisan affiliation, education and other categories.

Here are the questions asked in this survey, along with responses, and the methodology. Visit our interactive data tool to access the data on Americans’ attitudes of the news media during the coronavirus, as well as other issues related to news and the election.

Coverage of the current coronavirus outbreak has consumed much of the news media’s attention as Americans look for information in a time of high anxiety and uncertainty. Overall, more Americans hold positive than negative views of the news media’s coverage of the COVID-19 crisis, though broader views of the media are more evenly divided or more negative. And Republicans and Democrats continue to stand far apart in their opinions of the media during the pandemic, according to a new Pew Research Center survey conducted April 20-26, 2020, among 10,139 U.S. adults who are part of the Center’s American Trends Panel.

When asked to evaluate the news media’s coverage of the COVID-19 outbreak, Americans are more likely than not to think that the news media are fulfilling four key roles. For example, most Americans (59%) say the news media are providing them with the information they need about the coronavirus, compared with about a quarter (24%) who say this is not the case. And while nearly half of U.S. adults (49%) say the media’s COVID-19 coverage has been largely accurate, roughly a quarter (24%) say it has been mostly inaccurate. (The remainder say that neither of the statements in each case reflect their views.)

Americans also are more likely than not to say media coverage of the crisis is benefiting the public (rather than news organizations) and is helping the country (rather than hurting it).

The U.S. public continues to pay rapt attention to news coverage about the outbreak. Americans are following a wide range of coronavirus-related news topics at both the national and local level, and many have seen reporters change how they cover the news to some degree. 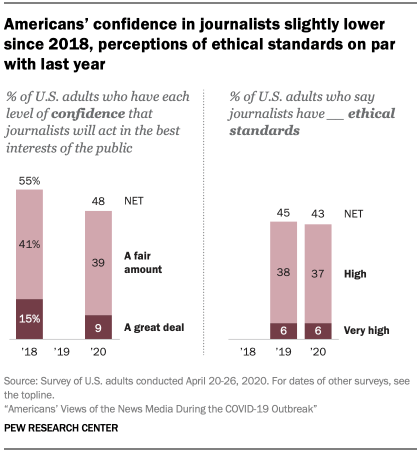 Similar to views of coronavirus coverage, partisan divides also persist over opinions toward journalists more generally – and are wider than for any other group of individuals asked in the survey, including business leaders, elected officials and religious leaders. For example, there is a 47-percentage-point gap between the shares of Republicans and Democrats who have at least a “fair amount” of confidence in journalists, almost exactly on par with the 46-point difference in 2018.

Overall, the findings show that Americans are largely evaluating the news media in similar ways during the COVID-19 outbreak as they did prior. Surveys conducted before the pandemic have shown that Americans often see the news media as performing well at specific roles. But Americans tend to have less positive views toward the news media and journalists more broadly. And what seems to be an unbreakable rift – even in a time of crisis – is the continued disconnect between the two parties in attitudes toward journalists and the content they produce.

You can find much of the data from this report in the Pew Research Center’s Election News Pathways data tool and analyze it alongside other data points.

Next: 1. Americans are more likely than not to think the news media are fulfilling key roles during the coronavirus outbreak, but partisans are starkly divided
← Prev Page
You are reading page1Page2Page3Page4Page5
Next Page →

Americans’ Views of the News Media During the COVID-19 Outbreak
1. Americans are more likely than not to think the news media are fulfilling key roles during the coronavirus outbreak, but partisans are starkly divided 2. Americans are more negative in their broader views of journalists than they are toward COVID-19 coverage Acknowledgments Methodology