During the early days of the coronavirus outbreak in the United States, about half of Americans (48%) said they had encountered at least some completely made-up news about it. Another 32% said “not much” when asked how much made-up pandemic news they had seen or heard.

A new, deeper study of open-ended responses to a survey of U.S. adults conducted March 10-16, 2020, as part of Pew Research Center’s Election News Pathways project, analyzes the specific storylines or claims about COVID-19 that Americans said they were exposed to. Those who reported seeing a lot, some or not much completely made-up news were asked to provide a specific example of a story or claim they had seen, and about half of them (52%) did so. The responses reveal a wide range of claims as well as a wide range of what Americans categorize as completely made-up news or information.

The largest category of what Americans called made-up information about the virus, accounting for about four-in-ten (41%) of those who provided an example, centered around the risk posed by the coronavirus – with some saying the fabricated claim exaggerated the risk and others citing claims that they said underestimated those risks. Next, three-in-ten named certain details about the virus itself that seemed made up, ranging from its origin to possible cures. 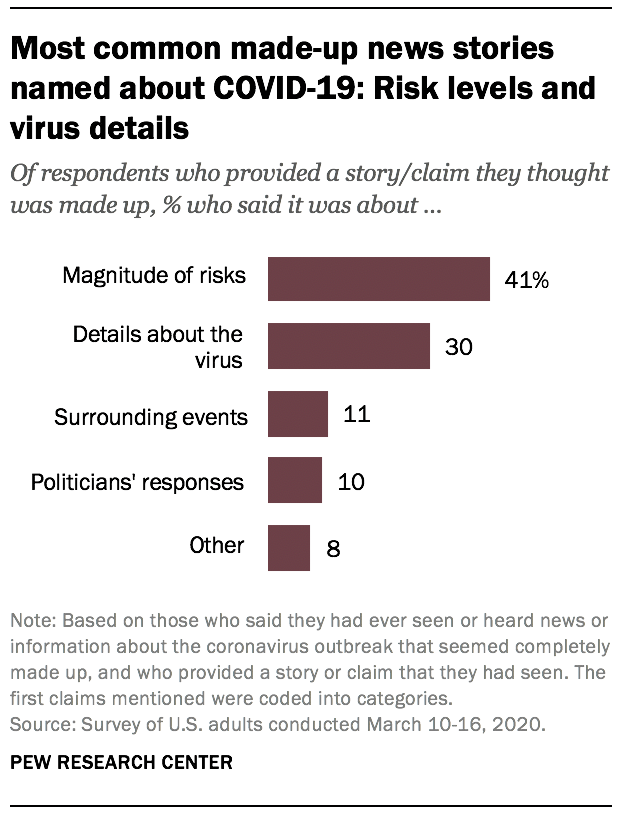 The next largest group (11%) identified seemingly made-up news that fell into a broad category of COVID-19 events and actions, ranging from reports on how China was disposing of the bodies of its dead to stories about entire cities and countries being on lockdown.

And 10% of those who provided examples of made-up claims cited claims that can be characterized as regarding the responses of politicians and other political actors. Not surprisingly, there were some who cited President Donald Trump as a primary purveyor of fabricated news and others who cited efforts to fault him as untrue and unfair.

All these responses suggest significant confusion and suspicion about information at a time when the course of the virus – and response to it – were evolving very quickly. During the survey period, reported U.S. cases of COVID-19 went from about 650 to more than 3,400, the World Health Organization declared the disease a pandemic, Trump suspended almost all air traffic from Europe, and schools from kindergartens to the university level began closing their doors. Some of this level of skepticism toward information about a crisis threatening the country’s health and economy also reflects a competitive, and often conflicting, media environment.

In all, 52% of those who said they had seen any made-up news related to the coronavirus outbreak offered specific storylines or claims they had come across that seemed completely made up.

The largest group of responses (41% of all who provided claims) cited information about the level of risk associated with the outbreak. Sentiment was divided between those who thought the information falsely elevated the risks (22%) and those who saw it downplaying the risks in a way that was not credible (15%).

Those in the first category named such things as numbers of COVID-19 deaths that seemed higher than possible and a false overplay of risks by sharp investors so they could make “gobs of money” by “shorting the stock market.” Some of these respondents said it was the media overhyping the risk, including someone who objected to a front-page newspaper photo designed to equate the coronavirus with the 1918 Spanish flu. (In the March 10-16 survey, one question asked people whether the media had exaggerated the risks of the virus. Roughly six-in-ten of all respondents – 62% – agreed they had either slightly or greatly exaggerated them.)

On the flip side, 15% said the made-up claims they saw underplayed the risks associated with the virus in some way, with some naming statements by Trump or his administration as examples of made-up statements, including saying that they heard the president predict an early end to the crisis and suggest that the number of cases in the U.S. could remain low. Others said they had seen made-up statements underplaying the risk of the virus and claiming the outbreak was a “hoax” by Democrats to harm Trump.

The next largest category of COVID-19-related claims people viewed as made-up dealt with the virus itself – 30% in all. Among the mix of specific claims, 12% had to do with the origin of the coronavirus. Those claims seen as made up often centered on China, which endured the first outbreak, and included reports that the pandemic was caused by a Chinese biological weapon gone astray or was part of a more sinister plot by that government to deal with overpopulation. (The March 10-16 survey also asked about the origin of the virus, and there was far from unanimity on the subject: A plurality of respondents – 43% – said it came about naturally; 29% said it was either unintentionally or intentionally created in a lab; and another 25% said they didn’t know.)

Other information cited as made-up news about the virus itself involved methods of prevention (4%) – including the benefits of wearing a face mask – as well as possible cures (4%). The made-up cures named included claims that everything from cocaine to garlic was effective in treating COVID-19.

Another pandemic narrative that respondents flagged as made-up news involved the idea that black people had inherent protection against COVID-19. In fact, a recent finding being reported by the media and the surgeon general is that the disease has affected black Americans at disproportionately high rates in a number of U.S. communities. 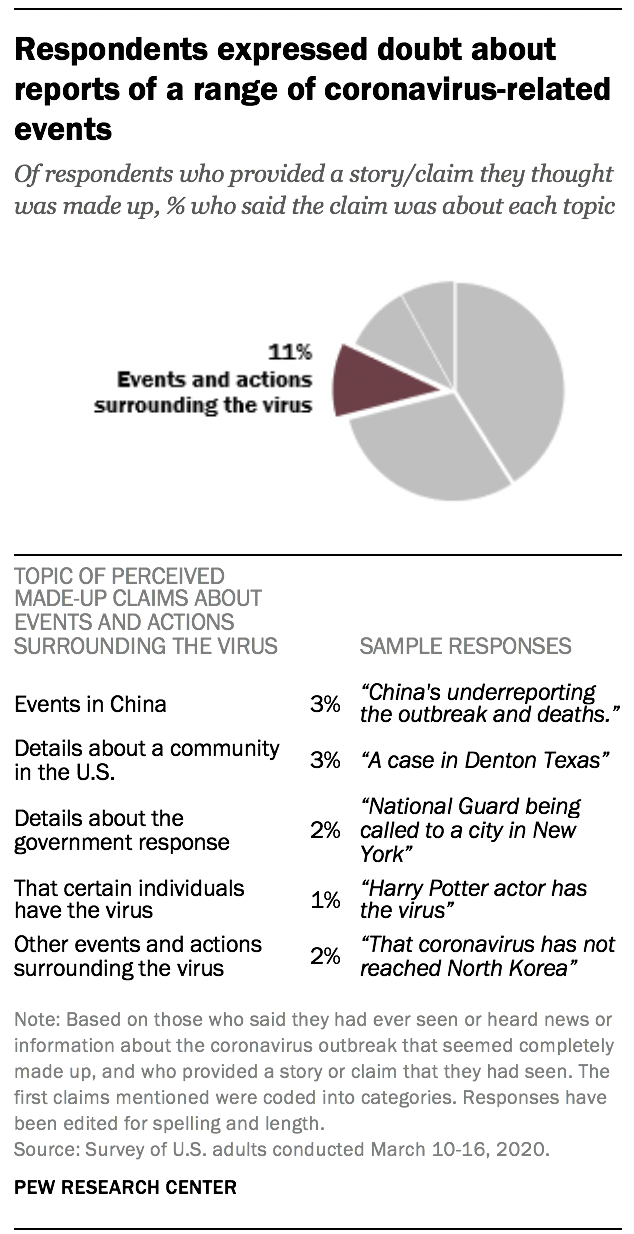 Another 11% of those who provided examples of made-up news they encountered cited reports that fall into a broad category of events and actions related to the outbreak.

Some respondents expressed uncertainty about the credibility of information about celebrities reported to have fallen ill. For example, Tom Hanks and his wife, actress Rita Wilson, announced on March 11 that they had been infected with COVID-19 (during the survey period), but some respondents cited this as an example of made-up information. Others cited reports that were clearly not true, such as the claim that Trump had acquired COVID-19.

Other respondents cited as fabricated reports they came across of cities or countries, such as New York or Italy, being on virtual lockdown. Given the lightning-quick spread of the virus and the ever-changing response to it, these reports could have conceivably been untrue one day and true the next. All of Italy was placed under lockdown on March 10 (the first day of this survey period) and Gov. Andrew Cuomo did order New York state residents to shelter in place on March 20 (after the survey period).

The other common topic of seemingly made-up news is about the responses of politicians or other political actors (10%). President Trump, with his high-profile televised briefings, was the most frequent name to appear in this category of claims cited as false, whether the claims were positive or negative toward him. Some cited claims that put blamed him for the current state of the outbreak as false, while others pointed to him as a source of made-up information himself.

Within the category of claims about politicians’ responses, 5% of respondents cited reports trying to blame Trump for the crisis as made-up news. Some of those examples say the claims were the work of liberals and their media allies. Democrats are “using this as a weapon against Trump,” wrote one respondent. Another said blaming Trump can be attributed to “idiots on MSNBC and CNN.”

Conversely, 4% cited the president as a general source of made-up information, referring to his tweets or statementson the outbreak as not credible. “Anything Trump says” was the terse answer from one of those respondents.

A smaller share of respondents (1%) cited examples of made-up information that blamed other political actors for poorly preparing for the virus or using the circumstances for political gain, such as those in Congress. Examples here include a claim that the coronavirus was made by Republicans and assertions that the Democrats had turned the crisis into a political contest.

You can read more about our research on public opinion of COVID-19 here.

Information about risks posed by the coronavirus leads the list of made-up news topicsAmericans report seeing made-up news about origin of, cures for COVID-19Reports of celebrity COVID-19 victims and countries under lockdown cited as made-up newsAmericans view some stories about political blame game as made-up news