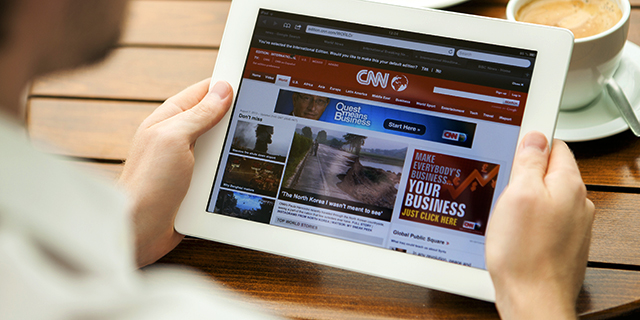 As digital audiences expand and move beyond news websites to social media, mobile apps, podcasting and even email newsletters, news publishers are making an effort to be in those places as well. This often means, though, ceding more control to tech companies such as Apple and Facebook, both financially and in the ability to systematically measure one’s reach.

The lack of consistent digital metrics also makes it harder to get a sense of the online news audience as a whole across the myriad of digital news providers and platforms. But a combination of audience analytics, survey data and auditing of publishers’ digital practices can give at least a sense of this evolving space.

Together, these various data sources suggest that audiences are continuing to turn to digital sources for their news, and the momentum is driven by users on their mobile devices rather than on their desktops. And with the majority of U.S. adults now getting news on social media, publishers are making an effort to be present in a variety of social media settings; a closer look at the publishing practices of digital-native news sites shows that this is true not only for Facebook and Twitter, but for Snapchat and Instagram as well. 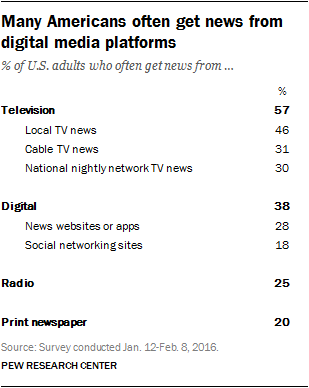 To first get a sense of how digital stacks up against other platforms as a source of news for the American public, it is helpful to turn to survey data. A 2016 Pew Research Center survey about news use on social media revealed digital news sources to be second only to television as the most frequently accessed type of media source. Nearly four-in-ten U.S. adults (38%) said that they often get news from digital sources, including news websites or apps (28%) and social networking sites (18%). That trails the 57% who often get news from a television source but outpaces both radio (25%) and print newspapers (20%).

What’s more, digital news sources also rank high when it comes to the types of sources people turned to for learning about one of the biggest news stories of the year: the 2016 presidential election. About two-thirds of U.S. adults (65%) said they learned about the election in the past week from digital sources, with nearly half of U.S. adults (48%) saying they did so from news sites or apps and 44% from social networking sites.

To get a sense of how digital sources of campaign news have become more prominent, consider a slightly different question about the 2012 presidential campaign from October 2012: Just 17% of U.S. adults at the time said that they regularly turned to any social media platforms for campaign news (compared to 44% who learned about the election in the past week in 2016) and just 36% said they turned to internet sources in general.

More broadly speaking, a cross-sector look at web traffic metrics from the analytics firm comScore reinforces the sense of growth in digital audience, especially in the mobile realm.

Indeed, for each of the four sectors studied in this analysis – newspapers, news magazines, national television news outlets and digital-native publishers – a majority of outlets (77 out of 110) grew their average monthly total digital audience in the fourth quarter of 2015, compared to the same period in 2014.1 For the 50 newspapers studied, 33 grew their average monthly unique visitors, and for the 12 news magazines, nine did. Looking at the eight national television news outlets, including the major networks, cable channels and Hispanic broadcasters, six increased their traffic. Finally, 29 out of the 40 digital-native news sites studied here experienced growth. 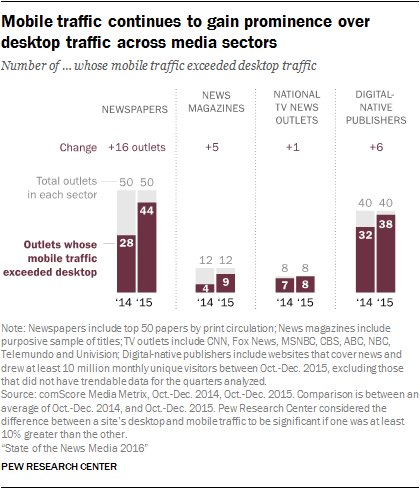 This digital growth is especially driven by growth in mobile audiences: For most of the outlets studied in each sector (99 out of 110), unique visitors on mobile devices outpaced unique visitors on desktops to their websites.2 And this mobile-majority status applied to a greater number of news organizations in the fourth quarter of 2015 than the same period in 2014, when the number was 71.3 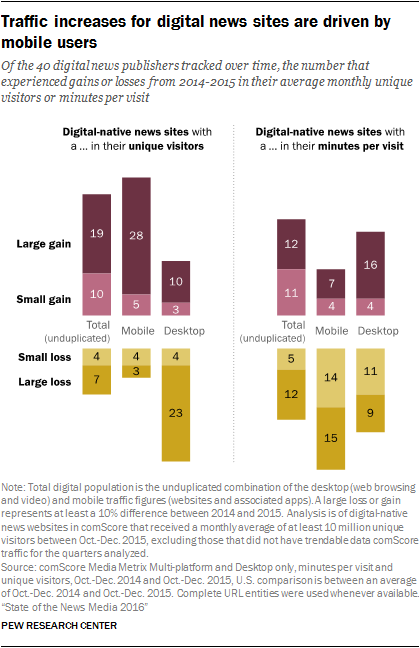 The mobile increase was particularly striking among the print outlets studied: Among the 50 highest circulating daily newspapers, the number whose digital traffic was mobile-majority increased by more than half in 2015 to 44. Among the cohort of 12 news magazines tracked by the Center for which there was trendable comScore data, the number whose traffic was mobile-majority more than doubled from four to 9 in 2015. (For this analysis, Pew Research Center analysts worked directly with comScore to identify and remove from the sample web entities whose traffic shifts over time were the result of inorganic changes in how those entities are measured by comScore, rather than organic changes in audience behaviors.)

More details on digital audience trends for legacy media, such as newspapers and news magazines, exist in each sector’s fact sheet.

The prominence of mobile also emerges among newer organizations not tied to a legacy platform. Pew Research Center studied the digital footprint of websites that meet the following criteria: they were “born on the web,” cover a range of news subjects, have data in comScore for the fourth quarters of 2014 and 2015, and received a minimum of 10 million unique visitors on average during the fourth quarter of 2015 according to the firm. That amounts to 40 sites in all and includes broad-interest sites such as the Huffington Post and BuzzFeed, as well as sites focused on a narrower range of subjects such as business (qz.com), the entertainment industry (TMZ.com) or politics (Salon.com). (For more information on how sites were studied, please read the methodology.)

In terms of overall web traffic, almost three-quarters of the digital-native outlets studied – 29 of the 40 – grew their average monthly unique visitors from the fourth quarter of 2014 to the fourth quarter of 2015, with 19 of these sites increasing 10% or more. And the data suggest that it is mobile traffic that is ascendant: The vast majority of the sites (38 of 40) attracted more visitors from mobile devices than from desktops in 2015. That is up from 32 of 40 in 2014.

Even as the traffic scales have tipped more toward mobile, the amount of time spent per visit has tipped even more toward desktop. Despite the continued movement to mobile, desktop visitors spend more time on these digital-native news sites. For more than half of the sites (23), desktop visitors spent more time per visit than mobile visitors, reflecting an uptick from the same time period in 2014 (when the same could be said for 14 of the sites). By contrast, mobile visitors spent more time with the stories on eight sites in 2015, down from 13 in 2014. 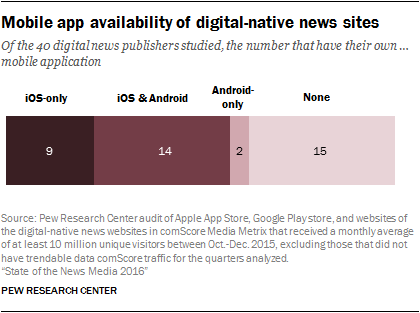 We also examined how these publishers are customizing their content for mobile devices and found mobile optimization of websites to be much more common than having a separately designed news app. Of the 40 publishers studied, 25 had created a mobile app of some sort (nine were iOS-only, two were Android-only and 14 had both). App development, however, is not the sole indicator of whether a publisher is working to maximize its mobile reading experience: 35 of the sites served cellphone and tablet audiences a website optimized for mobile browsing.4

Digital publishers’ presence beyond the homepage 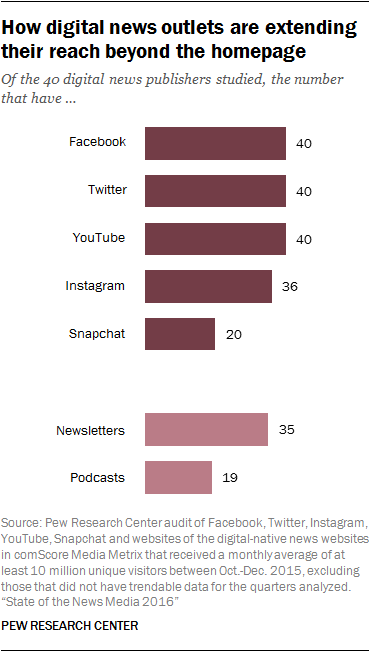 While website development continues, audiences also are turning to other digital platforms such as social media and direct messaging sites. Finding the best way to navigate these newer spaces and connect with audiences there has created some tension. On the one hand, technology companies are providing tools that allow publishers to create custom content for each social platform, often delivering a better user experience. Doing so, though, often means losing web traffic and some of the user data that comes with it. Two of the more recent developments brought this issue to the forefront: In April 2016, Facebook made its Instant Articles format available to any publisher, after rolling it out selectively in May 2015, and in March 2016, Apple opened up its Apple News newsreader to all publishers as well, after piloting it with a select group in 2015.

As news organizations weigh the advantages and disadvantages of these distribution options, many digital natives, at least, seem to be leaning towards having a presence there. To gauge developments in this area, the Center again examined the 40 digital-native news publishers indicated above.

All 40 of the digital-native publishers studied here have a presence on the more established social networking sites: Facebook, Twitter and YouTube. While Instagram and Snapchat are newer platforms that do not allow for direct links in individual posts and therefore do not drive traffic back to websites in the way the others do, 36 of the 40 sites are on Instagram. Only half are on Snapchat, the newest platform of the ones studied and still a breeding ground for experimentation by news publishers.

In addition to social media, digital publishers have been experimenting with other ways of reaching audiences, in some cases, revisiting formats that have been around for more than a decade.

The large majority of the sites (35) have email newsletters that readers can subscribe to and receive directly in their inbox. While having a newsletter can be a way to digest the content produced by a publisher, the data show that some publishers use them as a way to pursue more directed interests. Fourteen of the sites had multiple newsletters, many of which were on specific topics of expertise, with one site that had 41 different newsletters available.

As our podcasting data show, the past couple of years have seen a heightened interest in and awareness of podcasting, and some – though not most – of the digital news publishers studied here are capitalizing on this trend. For some digital publishers, like BuzzFeed, who entered the podcasting arena last spring, this move is a new and strategic one aimed at capturing digital audiences who are adept at crossing platforms. For others, like Slate, which boasts “millions of listeners” and even launched a podcasting network, podcasts are considered a flagship product. Among the digital publishers studied, 19 of the sites produced their own podcasts. Over half of the sites that had podcasts (13) produced more than one, and two sites produced 50 podcasts each.

Some publishers, digital and otherwise, are also experimenting with news applications using virtual reality technology, such as the Center for Investigative Reporting’s virtual reality pop-up studio. Some of the more notable journalistic virtual reality storytelling has come from legacy organizations, including the New York Times, the Wall Street Journal, the Des Moines Register, CNN and PBS Frontline.