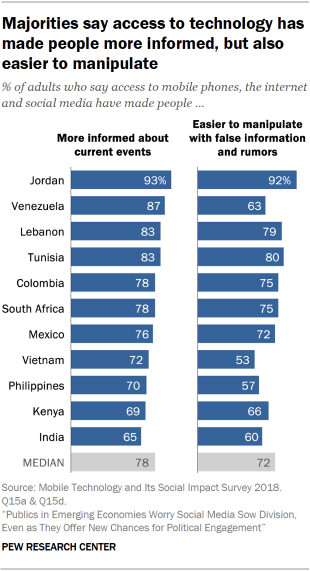 In recent years, the internet and social media have been integral to political protests, social movements and election campaigns around the globe. Events from the Arab Spring to the worldwide spread of #MeToo have been aided by digital connectivity in both advanced and emerging economies. But popular social media and messaging platforms like Facebook and WhatsApp have drawn attention for their potential role in spreading misinformation, facilitating political manipulation by foreign and domestic actors, and increasing violence and hate crimes.

Recently, the Sri Lankan government shut down several of the country’s social media and messaging services immediately after Easter day bombings at Catholic churches killed and wounded hundreds. Some technology enthusiasts praised the decision but wondered if this development marked a change from pro-democracy, Arab Spring-era hopes that digital technology would be a liberating tool to a new fear that it has become “a force that can corrode” societies.

In the context of these developments, a Pew Research Center survey of adults in 11 emerging economies finds these publics are worried about the risks associated with social media and other communications technologies – even as they cite their benefits in other respects. Succinctly put, the prevailing view in the surveyed countries is that mobile phones, the internet and social media have collectively amplified politics in both positive and negative directions – simultaneously making people more empowered politically and potentially more exposed to harm. 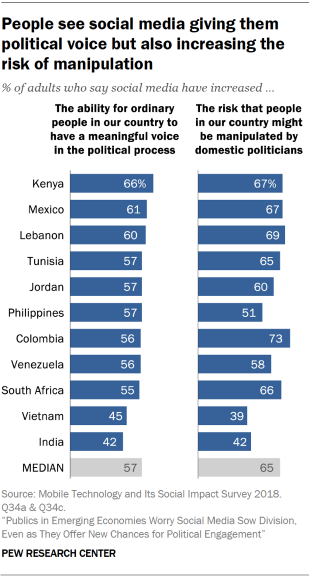 When it comes to the benefits, adults in these countries see digital connectivity enhancing people’s access to political information and facilitating engagement with their domestic politics. Majorities in each country say access to the internet, mobile phones and social media has made people more informed about current events, and majorities in most countries believe social media have increased ordinary people’s ability to have a meaningful voice in the political process. Additionally, half or more in seven of these 11 countries say technology has made people more accepting of those who have different views than they do.

But these perceived benefits are frequently accompanied by concerns about the limitations of technology as a tool for political action or information seeking. Even as many say social media have increased the influence of ordinary people in the political process, majorities in eight of these 11 countries feel these platforms have simultaneously increased the risk that people might be manipulated by domestic politicians. Around half or more in eight countries also think these platforms increase the risk that foreign powers might interfere in their country’s elections.

Similarly, the widespread view that technology has made people more informed about current events is often paired with worries that these tools might make people vulnerable: Majorities in 10 of these countries feel technology has made it easier to manipulate people with rumors and false information. Further, a recent report by the Center found that a median of 64% across these 11 countries say people should be very concerned about exposure to false or incorrect information when using their phones. 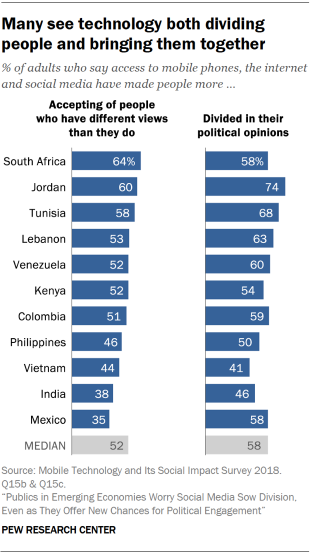 Publics in these countries are also conflicted over the extent to which technology is broadening people’s personal horizons or causing their politics to become more tribal – and many seem to see elements of both. An 11-country median of 52% say technology has made people more accepting of those who have different views than they do, while a median of 58% say it has made people more divided in their political opinions. In most countries, larger shares say technology is causing people to be more divided than say it has caused them to be open to different groups of people.

The public’s opinion is easily manipulated through social media. Videos circulating about politicians can either make them famous and likable or break them down.WOMAN, 23, TUNISIA

It is not simply the case that certain segments of the public have consistently positive views about the political impacts of digital technology while others feel consistently more negative. In many instances, individuals who are most attuned to the potential benefits technology can bring to the political domain are also the ones most anxious about the possible harms.

This report is the second in a series exploring mobile connectivity in 11 emerging economies. Because the first report goes into detail on mobile phone ownership and social media use, we will only briefly summarize it here.

In each of these countries, Facebook or WhatsApp are the most widely used digital platforms among the seven asked about. A median of 62% of adults in these countries report using Facebook, and a median of 47% say they use WhatsApp. Using multiple social platforms is common: In all countries but the Philippines, India and Vietnam, around a third or more say they currently use more than one social media platform or messaging app. Among adults who use only one of these platforms, Facebook or WhatsApp tend to be dominant.

In most countries, each of these social media and messaging services are more likely to be used by younger adults. Educational gaps in usage are also significant for most of these services, with people who have a secondary education or higher being more likely to use them. 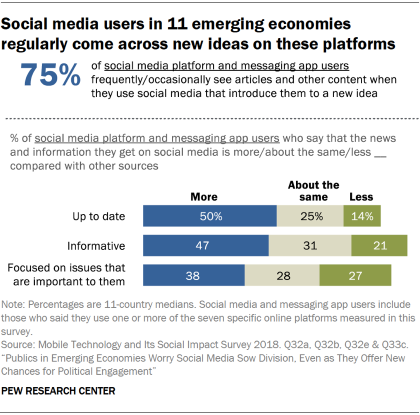 These broad public views about the positive and negative impacts of technology on the political and information environment are echoed in social media users’ lived experiences on these platforms. 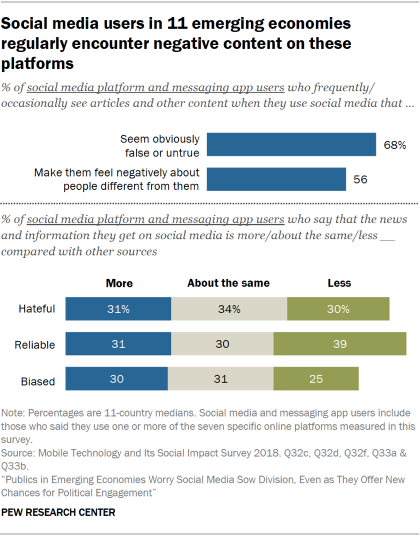 But as was true of views of the overall technology landscape, social media users see challenges as well as benefits. Most notably, majorities of social media users in 10 of these 11 countries frequently or occasionally encounter content that seems obviously false or untrue, and majorities of users in six countries regularly encounter content on these platforms that makes them feel negatively about groups of people who are different than they are.

Social media users also express mixed opinions about the characteristics of the social media environment relative to other information sources. Only in Vietnam do a plurality of users say these platforms are more reliable than other sources they encounter. In other countries, users are more divided about whether the information on social media is about as reliable – or less so – than what they see elsewhere. Opinion is also relatively mixed across the 11 countries as far as whether the news people get on these platforms is more hateful than what they get elsewhere.

We have to understand that there are scores of websites and articles on the internet that are false and inaccurate, purely opinion, or extremely biased or slanted.WOMAN, 22, PHILIPPINES

This range of experiences and attitudes is also reflected in at least some users’ personal interactions on social media platforms. An 11-country median of 36% of social media users – including around half in Kenya and Venezuela – say they have learned someone’s political beliefs were different than they had thought based on things that person posted to social media. In all 11 countries surveyed, those who have been surprised by someone’s political beliefs in this way are more likely to say technology has made people more divided in their political opinions. In seven countries, however, these users are also more likely to say access to technology has made people more accepting of those who have different views. 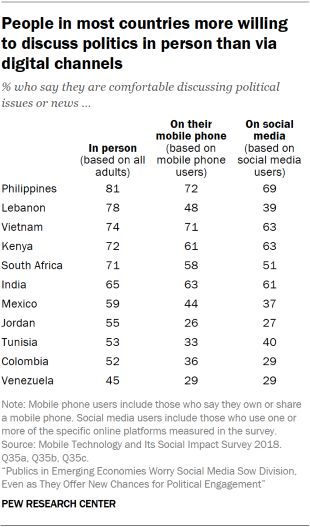 You know, there’s a politician that sends text messages to us saying ‘Happy birthday, from Senator this-and-that.’ Even with that, they have already got your number. What more [do they have] if you’re already on social media?MAN, 44, PHILIPPINES

These are among the major findings from a new Pew Research Center survey conducted among 28,122 adults in 11 countries from Sept. 7 to Dec. 7, 2018. In addition to the survey, the Center conducted focus groups with diverse groups of participants in Kenya, Mexico, the Philippines and Tunisia in March 2018, and their comments are included throughout the report (see Appendix A for more information).

Second report in a series about mobile connectivity in emerging economies

After more than a decade of studying the spread and impact of mobile devices in the United States, Pew Research Center has intensified its exploration of the impact of such connectivity in emerging economies. This report is the second of several reports about mobile use and attitudes toward digital connectivity in these 11 countries.

The first report covered general topics such as the impact of mobile connectivity on the economy, children and communication. It also found that people experience myriad tensions with their devices. Some examples include:

These types of tensions are common in many Pew Research Center surveys about technology in the United States. For more, see Appendix B.

Next: 1. Users say they regularly encounter false and misleading content on social media – but also new ideas
← Prev Page
You are reading page1Page2Page3Page4Page5Page6Page7Page8Page9
Next Page →

Smartphone Ownership Is Growing Rapidly Around the World, but Not Always Equally