Real-world examples of the scenarios in this survey

All four of the concepts discussed in the survey are based on real-life applications of algorithmic decision-making and artificial intelligence (AI):

Numerous firms now offer nontraditional credit scores that build their ratings using thousands of data points about customers’ activities and behaviors, under the premise that “all data is credit data.”

States across the country use criminal risk assessments to estimate the likelihood that someone convicted of a crime will reoffend in the future.

Computerized resume screening is a longstanding and common HR practice for eliminating candidates who do not meet the requirements for a job posting.

Algorithms are all around us, utilizing massive stores of data and complex analytics to make decisions with often significant impacts on humans. They recommend books and movies for us to read and watch, surface news stories they think we might find relevant, estimate the likelihood that a tumor is cancerous and predict whether someone might be a criminal or a worthwhile credit risk. But despite the growing presence of algorithms in many aspects of daily life, a Pew Research Center survey of U.S. adults finds that the public is frequently skeptical of these tools when used in various real-life situations.

This skepticism spans several dimensions. At a broad level, 58% of Americans feel that computer programs will always reflect some level of human bias – although 40% think these programs can be designed in a way that is bias-free. And in various contexts, the public worries that these tools might violate privacy, fail to capture the nuance of complex situations, or simply put the people they are evaluating in an unfair situation. Public perceptions of algorithmic decision-making are also often highly contextual. The survey shows that otherwise similar technologies can be viewed with support or suspicion depending on the circumstances or on the tasks they are assigned to do.

To gauge the opinions of everyday Americans on this relatively complex and technical subject, the survey presented respondents with four different scenarios in which computers make decisions by collecting and analyzing large quantities of public and private data. Each of these scenarios were based on real-world examples of algorithmic decision-making (see accompanying sidebar) and included: a personal finance score used to offer consumers deals or discounts; a criminal risk assessment of people up for parole; an automated resume screening program for job applicants; and a computer-based analysis of job interviews. The survey also included questions about the content that users are exposed to on social media platforms as a way to gauge opinions of more consumer-facing algorithms.

The following are among the major findings. 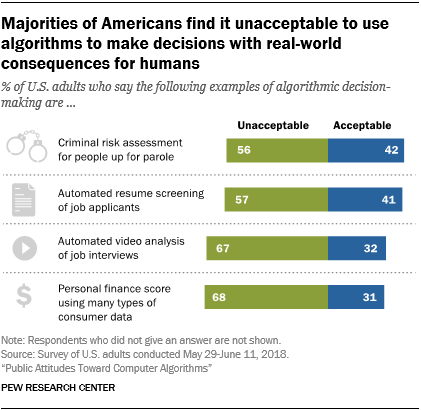 By and large, the public views these examples of algorithmic decision-making as unfair to the people the computer-based systems are evaluating. Most notably, only around one-third of Americans think that the video job interview and personal finance score algorithms would be fair to job applicants and consumers. When asked directly whether they think the use of these algorithms is acceptable, a majority of the public says that they are not acceptable. Two-thirds of Americans (68%) find the personal finance score algorithm unacceptable, and 67% say the computer-aided video job analysis algorithm is unacceptable.

There are several themes driving concern among those who find these programs to be unacceptable. Some of the more prominent concerns mentioned in response to open-ended questions include the following:

Attitudes toward algorithmic decision-making can depend heavily on context

Despite the consistencies in some of these responses, the survey also highlights the ways in which Americans’ attitudes toward algorithmic decision-making can depend heavily on the context of those decisions and the characteristics of the people who might be affected.

This context dependence is especially notable in the public’s contrasting attitudes toward the criminal risk score and personal finance score concepts. Similar shares of the population think these programs would be effective at doing the job they are supposed to do, with 54% thinking the personal finance score algorithm would do a good job at identifying people who would be good customers and 49% thinking the criminal risk score would be effective at identifying people who are deserving of parole. But a larger share of Americans think the criminal risk score would be fair to those it is analyzing. Half (50%) think this type of algorithm would be fair to people who are up for parole, but just 32% think the personal finance score concept would be fair to consumers.

When it comes to the algorithms that underpin the social media environment, users’ comfort level with sharing their personal information also depends heavily on how and why their data are being used. A 75% majority of social media users say they would be comfortable sharing their data with those sites if it were used to recommend events they might like to attend. But that share falls to just 37% if their data are being used to deliver messages from political campaigns. 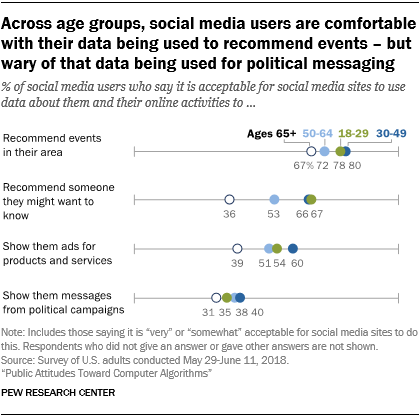 In other instances, different types of users offer divergent views about the collection and use of their personal data. For instance, about two-thirds of social media users younger than 50 find it acceptable for social media platforms to use their personal data to recommend connecting with people they might want to know. But that view is shared by fewer than half of users ages 65 and older.

Algorithms shape the modern social media landscape in profound and ubiquitous ways. By determining the specific types of content that might be most appealing to any individual user based on his or her behaviors, they influence the media diets of millions of Americans. This has led to concerns that these sites are steering huge numbers of people toward content that is “engaging” simply because it makes them angry, inflames their emotions or otherwise serves as intellectual junk food.

On this front, the survey provides ample evidence that social media users are regularly exposed to potentially problematic or troubling content on these sites. Notably, 71% of social media users say they ever see content there that makes them angry – with 25% saying they see this sort of content frequently. By the same token, roughly six-in-ten users say they frequently encounter posts that are overly exaggerated (58%) or posts where people are making accusations or starting arguments without waiting until they have all the facts (59%). 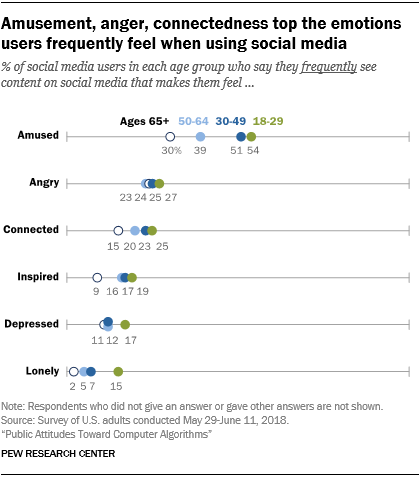 Next: 1. Attitudes toward algorithmic decision-making
← Prev Page
You are reading page1Page2Page3Page4Page5
Next Page →