Washington (February 20, 2014) – People connect to form groups on Twitter for a variety of purposes. The networks they create have identifiable contours that are shaped by the topic being discussed, the information and influencers driving the conversation, and the social network structures of the participants.

A special analysis by the Pew Research Center and the Social Media Research Foundation of thousands of Twitter conversations finds there are six distinct patterns to the conversational and social structures that take place on Twitter:

We can visualize the different structures using a schematic diagram and a real world example of that pattern in Twitter: 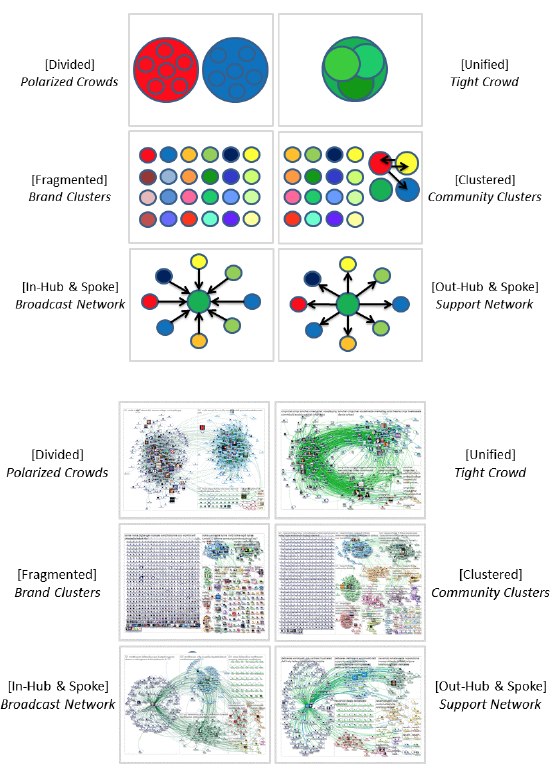 The analysis and these maps of social structures were created using an open-source tool called NodeXL that is a plug-in to Excel spreadsheets which allows researchers to examine the interplay of tweets, retweets, Twitter messages and the social networks of Twitter users – the people they follow and who follow them.

“Social media is increasingly home to civil society, the place where knowledge sharing, public discussions, debates, and disputes are carried out,” noted Marc A. Smith, the Director of the Social Media Research Foundation and a main author of a new report on Twitter maps. “These network maps provide new insights into the role social media play in society. Our work is in the spirit of observational researchers like 17th century botanists describing the variety of flowers on a newly discovered island or astronomers whose new telescopes that allow them to see different categories of galaxies. We are looking at things that have existed for a while, but with new tools that allow us to describe them in fresh ways.”

It is important to remember that the people who take the time to post and talk about any subject — political or otherwise – on Twitter are a special group. Their conversations are not representative of the views or behaviors of the full Twitterverse. Moreover, Twitter users are only 18% of internet users and 14% of the overall adult population. Still, the structure of these Twitter conversations says something meaningful about how engaged users discuss topics, find each other, and share information.

“These maps provide insights into people’s behavior in a way that complements and expands on traditional research methods such as public opinion surveys, focus groups, and even sentiment analysis of texts,” said Lee Rainie, Director of the Pew Research Center Internet Project. “It gives us a way to take the digital equivalent of aerial photos of crowds and simultaneously listen to their conversations.”

One of the main insights of this work is that each of the network structures has an opposite: They can be divided into pairs: divided Polarized Crowds in contrast to unified Tight Crowds; fragmented Brand Clusters in contrast to relatively cohesive Community Clusters; inward facing hubs and spoke Broadcast Networks in contrast to outward facing Support Networks.

“In polarized crowds, typically triggered by controversial political issues, users interact with like-minded users, receive their information from sources they agree with and link to websites that support their opinions,” noted Professor Itai Himelboim from the University of Georgia and a co-author of the report. “It reminds me of ‘high school politics’ – we don’t talk with you, we don’t listen to you, but we definitely talk about you.”

Among other things, social network mapping can identify and highlight key people in influential locations in a discussion network.

“These are data-driven early steps in understanding Twitter discussion structures that contribute to the emerging science of social participation,” said Prof. Ben Shneiderman of the University of Maryland, who is also a report co-author. “This new field is emerging right before our eyes and could eventually have a large impact on our understanding of everything from health to community safety, from business innovation to citizen science, and from civic engagement to sustainable energy programs.”