The second stage of weighting balances sample demographics to population parameters. The sample is balanced by form to match national population parameters for sex, age, education, race, Hispanic origin, region (U.S. Census definitions), population density, and telephone usage. The White, non-Hispanic subgroup is also balanced on age, education and region. The basic weighting parameters came from a special analysis of the Census Bureau’s 2010 Annual Social and Economic Supplement (ASEC) that included all households in the continental United States. The population density parameter was derived from Census 2000 data. The cell phone usage parameter came from an analysis of the January-June 2010 National Health Interview Survey.8 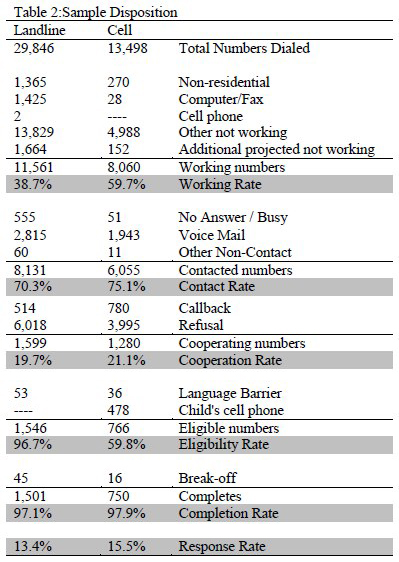 The topline for this report is available to download as a PDF here.

Cell Phone Activities 2013
Twitter Update 2011
U.S. Image Plummets Internationally as Most Say Country Has Handled Coronavirus Badly
Quiz: Where do you fit in the political typology?
Support for Black Lives Matter has decreased since June but remains strong among Black Americans
The 2020 Trump-Biden matchup
Defining generations: Where Millennials end and Generation Z begins