About one third (32%) of all teenagers who use the internet say they have been targets of a range of annoying and potentially menacing online activities – such as receiving threatening messages; having their private emails or text messages forwarded without consent; having an embarrassing picture posted without permission; or having rumors about them spread online. 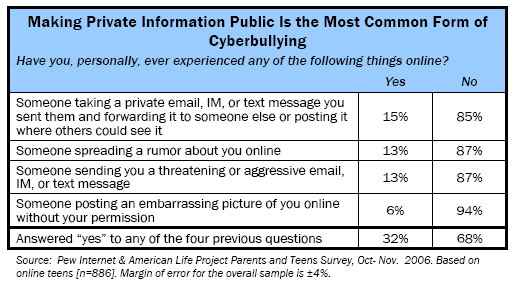 Depending on the circumstances, these harassing or “cyberbullying” behaviors may be truly threatening, merely annoying or relatively benign. But several patterns are clear: girls are more likely than boys to be targets; and teens who share their identities and thoughts online are more likely to be targets than are those who lead less active online lives.

Yet when asked where they thought bullying happened most often to teens their age, the majority of teens, 67%, said that bullying and harassment happens more offline than online. Less than one in three teens (29%) said that they thought that bullying was more likely to happen online, and three percent said they thought it happened both online and offline equally.

These results come from a nationally-representative phone survey of 935 teenagers by the Pew Internet & American Life Project.

In focus groups conducted by the Project about the issue, one 16-year-old girl casually described how she and her classmates bullied a fellow student: “There’s one MySpace from my school this year.  There’s this boy in my anatomy class who everybody hates.  He’s like the smart kid in class.  Everybody’s jealous.  They all want to be smart.  He always wants to work in our group and I hate it.  And we started this thing, some girl in my class started this I Hate [Name] MySpace thing.  So everybody in school goes on it to comment bad things about this boy.”

Girls are more likely than boys to say that they have ever experienced cyberbullying – 38% of online girls report being bullied, compared with 26% of online boys. Older girls in particular are more likely to report being bullied than any other age and gender group, with 41% of online girls ages 15 to 17 reporting these experiences. Teens who use social network sites like MySpace and Facebook and teens who use the internet daily are also more likely to say that they have been cyberbullied.  Nearly 4 in 10 social network users (39%) have been cyberbullied in someway, compared with 22% of online teens who do not use social networks.

The most commonly experienced bullying is having someone take a private email, IM or text message and forwarding it on to someone else or posting the communication publicly. Nearly 1 in 6 (15%) of online teens said they had experienced unwanted forwarding of private communication. Older teens (ages 15-17) say they are more likely to have had someone forward or publicly post private messages – 18% of older teens have experienced this, compared with 11% of younger teens.

The rumor mill speeds up

A bit more than one in eight or 13% of teens said that someone had spread a rumor about them online. A girl in middle school told us: “I know a lot of times online someone will say something about one person and it’ll spread and then the next day in school, I know there’s like one of my friends, something happened online and people started saying she said something that she never said, and the next day we came into school and no one would talk to her and everyone’s ignoring her. And she had no idea what was going on. Then someone sent her the whole conversation between these two people.” 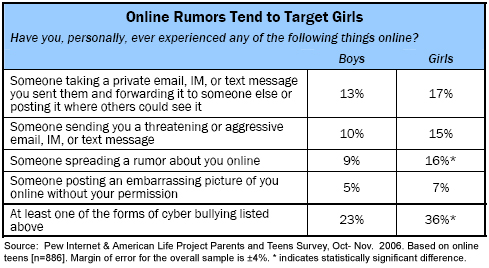 One in eight online teens (13%) reported that someone had sent them a threatening or aggressive email, instant message or text message. One fifteen-year-old boy in a focus group admitted, “I played a prank on someone but it wasn’t serious …I told them I was going to come take them from their house and kill them and throw them in the woods.  It’s the best prank because it’s like ‘oh my god, I’m calling the police’ and I was like ‘I’m just kidding, I was just messing with you.’  She got so scared though.”

Older teens, particularly 15- to 17-year-old girls, are more like to report that they have received a threatening email or message. Overall, 9% of online teens ages 12-14 say they have been threatened via email, IM or text, while 16% of online teens ages 15-17 report similar harassment. Among older girls, 19% have received threatening or aggressive email, IMs or text messages. Social network users are more likely than those who do not use social networks to report that someone had sent them a threatening or aggressive email (16% vs. 8%).

Um, I swear that is not me

Fewer teens, some 6%, reported that someone had posted an embarrassing picture of them online without their permission. Not surprisingly, given the number of photos posted on social networking websites, users of those sites are more likely to report that someone had posted embarrassing pictures of them online without their permission –9% of social network users reported this, compared with just 2% of those who do not use social networking sites. Similarly, teens who post photos themselves are more likely to report that someone has posted an embarrassing photo of them without their permission. One 17-year-old boy explained “I’m not a big fan of MySpace. Well, I got in trouble from one of them at my school… I had one and they [other friends] put a bad picture up there [on her page] and I got in a little trouble at school… Some girl just put up like pictures of us on New Year’s Eve and the Dean saw it.” 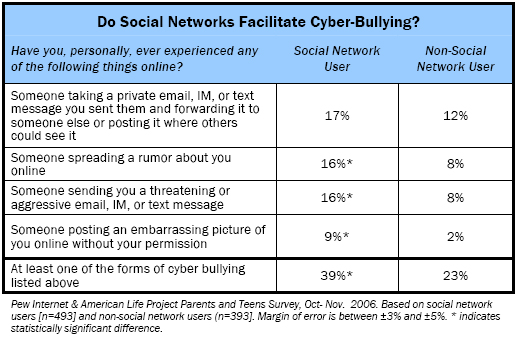 Teen who have been cyberbullied are more likely than their peers who have not been bullied to say that they believe bullying happens online more than offline. However, the majority of bullied teens say that bullying is more likely to happen offline than online. More than 7 in 10 (71%) of teens who have not experienced bullying believe it happens more often offline, while 57% of teens who have been cyberbullied themselves say bullying happens more offline.

Why do teens bully online?

In our focus groups, we asked teens about online experiences they had with bullying and harassment. In some cases what we heard was that adolescent cruelty had simply moved from the school yard, the locker room, the bathroom wall and the phone onto the internet. The simplicity of being able to replicate and quickly transmit digital content makes bullying quite easy. “Just copy and paste whatever somebody says,” a middle school girl explains as she describes online bullying tactics. “You have to watch what you say…” counsels another middle school girl. “If that person’s at their house and if you say something about them and you don’t know they’re there or if you think that person’s your friend and you trust them and you’re like, ‘Oh, well, she’s really being annoying,’ she could copy and paste and send it to [anyone]…” Another middle school girl describes how the manipulation of digital materials can be used to hurt someone. “Like I was in a fight with a girl and she printed out our conversation, changed some things that I said, and brought it into school, so I looked like a terrible person.”

Some teens suggested that it is the mediated nature of the communication that contributes to bullying, insulating teens from the consequences of their actions. One high school boy responded to the question whether he had heard of cyberbullying: “I’ve heard of it and experienced it. People think they are a million times stronger because they can hide behind their computer monitor. Also known as ‘e-thugs.’ Basically I just ignored the person and went along with my own civilized business.” A middle school girl described “stuff starting online for no reason.”

Intolerance also sparks online bullying incidents, as a middle school girl related in a focus group. “I have this one friend and he’s gay and his account got hacked and someone put all these really homophobic stuff on there and posted like a mass bulletin of like some guy with his head smashed open like run over by a car. It was really gruesome and disgusting.”

Bullying has entered the digital age. The impulses behind it are the same, but the effect is magnified. In the past, the materials of bullying would have been whispered, shouted or passed around. Now, with a few clicks, a photo, video or a conversation can be shared with hundreds via email or millions through a website, online profile or blog posting.

Next: Methodology
← Prev Page
You are reading page1Page2Page3Page4
Next Page →

Cyberbullying
One in three online teens have experienced online harassment. Girls are more likely to be victims, but most teens say that they are more likely to be bullied offline than online.The gender gapFewer communications are private anymoreThe rumor mill speeds upOlder girls receive more online threatsUm, I swear that is not meIntense internet users are bullied moreBullying happens more often offlineWhy do teens bully online?
Methodology About the Pew Internet & American Life Project Question language