New sample was released daily and was kept in the field for at least five days. This ensures that complete call procedures were followed for the entire sample. Additionally, the sample was released in replicates to make sure that the telephone numbers called are distributed appropriately across regions of the country. At least 10 attempts were made to complete an interview at every household in the sample. The calls were staggered over times of day and days of the week to maximize the chances of making contact with a potential respondent. Interview refusals were recontacted at least once in order to try again to complete an interview.  All interviews completed on any given day were considered to be the final sample for that day.

Non-response in telephone interviews produces some known biases in survey-derived estimates because participation tends to vary for different subgroups of the population, and these subgroups are likely to vary also on questions of substantive interest. In order to compensate for these known biases, the sample data are weighted in analysis. The demographic weighting parameters are derived from a special analysis of the most recently available Census Bureau’s Current Population Survey (March 2001). This analysis produces population parameters for the demographic characteristics of adults age 18 or older, living in households that contain a telephone. These parameters are then compared with the sample characteristics to construct sample weights. The weights are derived using an iterative technique that simultaneously balances the distribution of all weighting parameters. 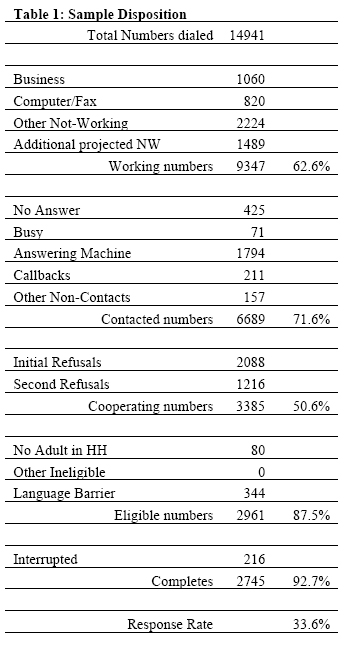 PSRA calculates a response rate as the product of three individual rates:  the contact rate, the cooperation rate, and the completion rate.  Of the residential numbers in the sample, 71.6 percent were contacted by an interviewer and 50.6 percent agreed to participate in the survey.  Eighty-eight percent were found eligible for the interview.  Furthermore, 92.7 percent of eligible respondents completed the interview.  Therefore, the final response rate is 33.6 percent. 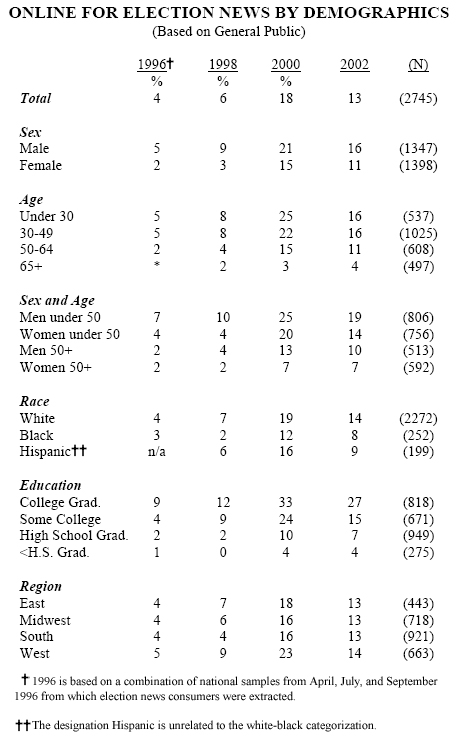 Question: Have you gone/Did you ever go online to get news or information about the 2002 mid-term elections? 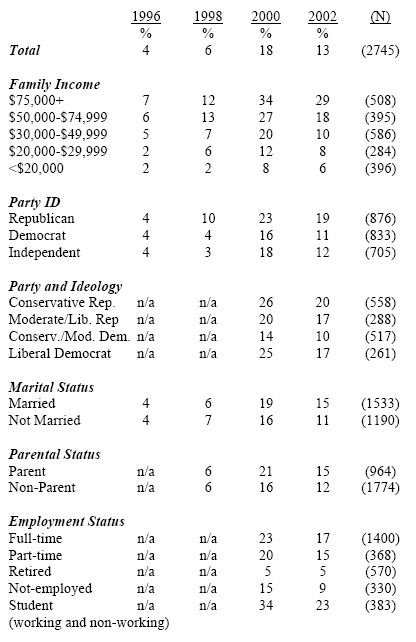 PEW RESEARCH CENTER FOR THE PEOPLE AND THE PRESS

THE GEORGE WASHINGTON UNIVERSITY INSTITUTE
FOR POLITICS, DEMOCRACY, AND THE INTERNET

Q2  Now I have a few questions about whether you spent any time reading or watching the news yesterday. Just thinking about yesterday, did you get a chance to read a daily newspaper, or not?1 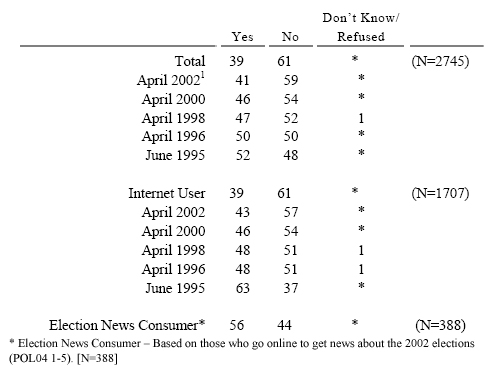 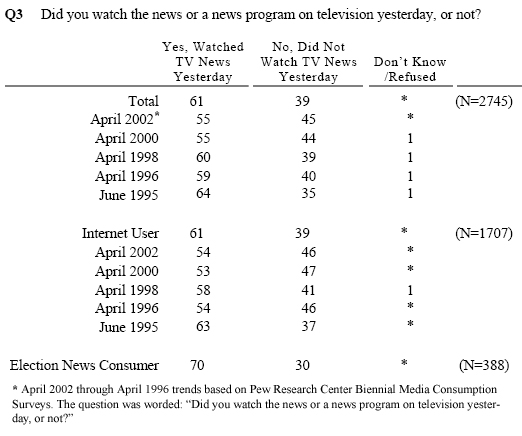 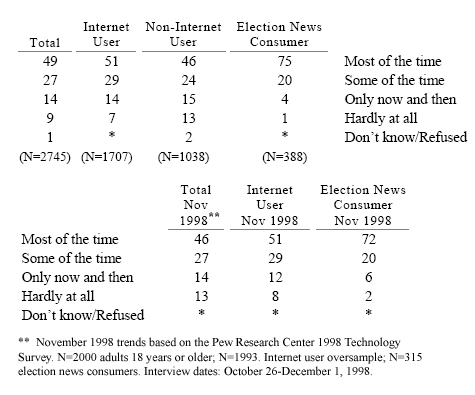 Q6  Do you ever go online to access the Internet or World Wide Web or to send and receive email? 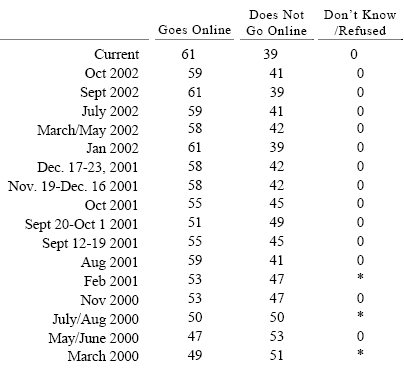 WEB1  Please tell me if you ever do any of the following when you go online. Do you ever… Did you happen to do this yesterday, or not? 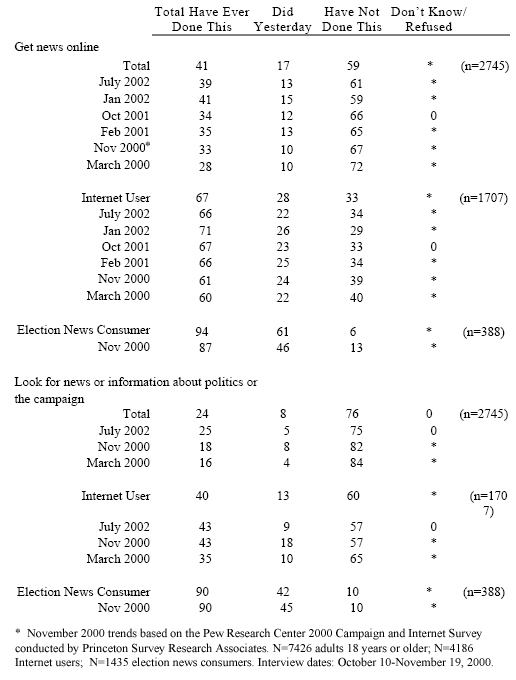 Q17  How do/did you get most of your news about the election campaigns in your state and district? From television, from newspapers, from radio or from magazines or from the Internet? (Multiple Response)

Q17b  Did you get most of your news about the election campaigns from network TV news, from local TV news, or from cable news networks such as CNN or MSNBC? 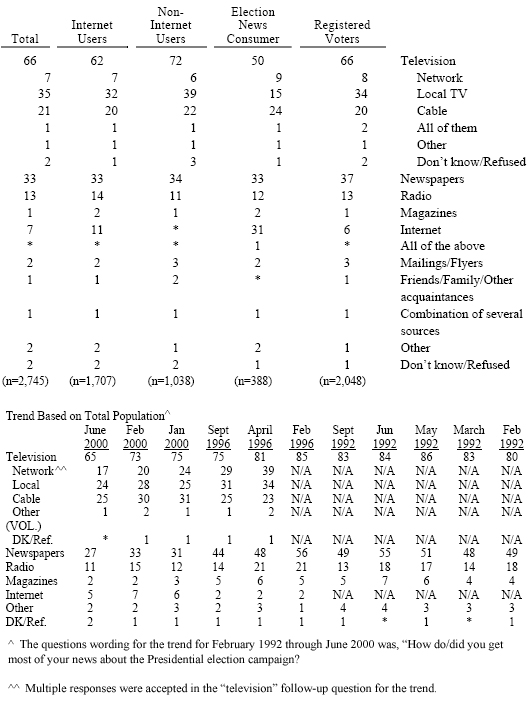 POL03  Have you gone/Did you ever go online to get news or information about the 2002 mid-term elections? 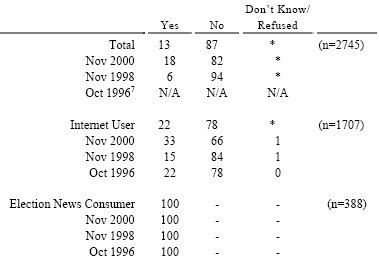 POL04  How often do you go online to get news about the elections… more than once a day, everyday, 3-5 days per week, 1-2 days per week, or less often? 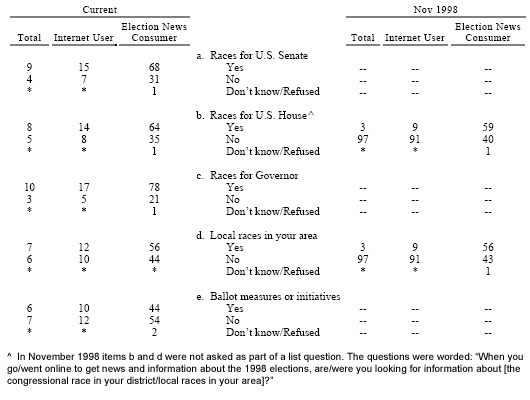 POL06  Where do you go most often for news and information about the 2002 mid-term elections? (Multiple Response) 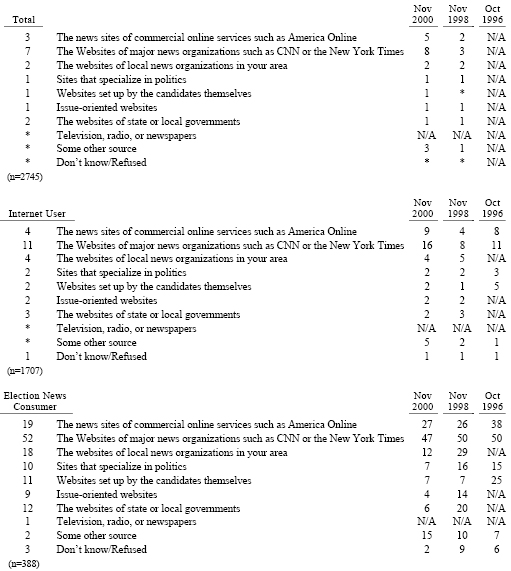 POL08  When you go online to get information about the elections, do you ever do any of the following things? First, do you ever (INSERT)? 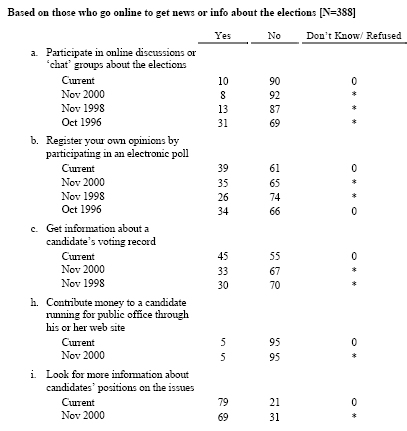 POL02  Some people go online for campaign news because they are very interested in politics and enjoy following it. Others don’t enjoy politics, but they keep up with it because they feel it’s their duty to be well-informed. Which view comes closer to your own?

POL09  Which of the following comes closest to describing WHY you go online to get news and information about the 2002 mid-term elections? (Multiple Response)

POL09b  Do you ever visit Web sites that provide information about specific issues or policies that interest you such as the environment, gun control, abortion, or health care reform? 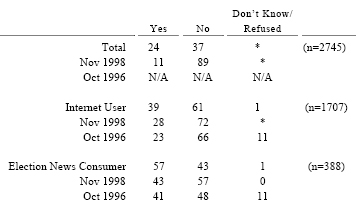 POL13  Has/Did any of the information you have received online about the 2002 mid-term elections made/make you decide to vote for or against a particular candidate? 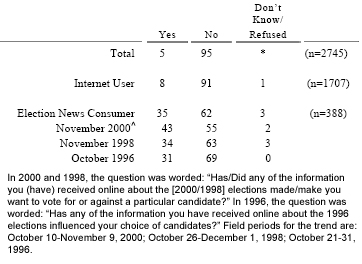 Twitter Update 2011
Quiz: Where do you fit in the political typology?
Support for Black Lives Matter has decreased since June but remains strong among Black Americans
U.S. Image Plummets Internationally as Most Say Country Has Handled Coronavirus Badly
The 2020 Trump-Biden matchup
An examination of the 2016 electorate, based on validated voters