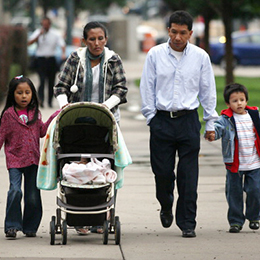 DENVER, CO – JULY 13: Undocumented Mexican immigrant Jeanette Vizguerra (L), her husband Salvador and their children Luna, 7, and Roberto, 5, walk to her immigration hearing in federal court on July 13, 2011 in Denver, Colorado. At the hearing, the court said it would not release it’s verdict on her possible deportation until October, leaving her and her family in continued uncertainty. Vizguerra is a mother of four children, three of whom were born in the U.S. as American citizens. If Vizguerra is deported back to Mexico, she says her husband and children will stay on in the United States. Just one of millions of undocumented immigrants living in the U.S., Vizguerra first came to Colorado from Mexico City with her husband and first child 14 years before. Now an activist for the immigration advocate group Rights For All People, she also owns a janitorial service and says she has always paid state and federal taxes on her income. Some two years ago she was stopped by a traffic policemen for driving with expired tags and taken to jail when she could not prove her legal immigration status. Out on bail during court proceedings, she now faces the real possibility that she will be deported to Mexico and separated from her family in the United States. (Photo by John Moore/Getty Images)