Hispanics have somewhat different patterns of information consumption than whites and blacks, according to the Pew Research Center Library Services Survey. For example, Hispanics are more likely to prefer learning in an audio or visual format over text compared with non-Hispanics, and more likely to say that they like hunting for facts and information that are hard to find. The survey also finds that immigrant Hispanics are generally more likely than U.S.-born Hispanics, whites or blacks to predict that they will have trouble finding information and to ask for help in completing some tasks requiring specialized knowledge. 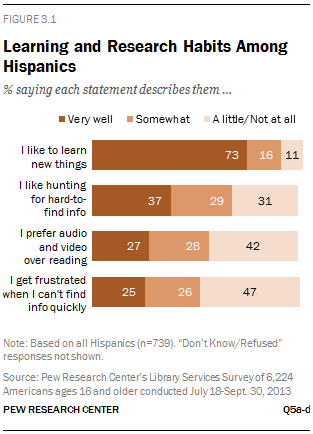 The Pew Research Center survey asked respondents about their learning and research habits. For example, it asked whether such statements as “I like to learn new things,” “I like hunting for facts and information that are hard to find,” “I get frustrated when I can’t find information I need right away” and “I prefer audio and video over reading” describe them very well, somewhat, a little or not at all.

Patterns of learning and research habits vary some among Hispanics, whites and blacks. For example, Hispanics and blacks are slightly more likely than whites to say that the statement “I like to learn new things” describes them very well—73% and 73% compared with 67%, respectively. When it comes to finding information, 37% of Hispanics say the statement “I like hunting for facts and information that are hard to find” describes them very well. By comparison, somewhat smaller shares of whites (27%) and blacks (30%) express the same view. The survey also reveals that Hispanics are more likely than whites and blacks to say the statement “I prefer getting information in audio and video format than from reading text” describes them very well—27% compared with 18% and 22%, respectively.

The survey also finds that Latinos are just as likely as whites or blacks to say they get frustrated when they can’t find information quickly. One-quarter (25%) of Latinos say the statement describes them very well, as do 24% of whites and 21% of blacks.

There are significant differences among Hispanic subgroups on some, but not all, of these information consumption statements. For example, the foreign born are more likely than the U.S. born to say that the statement “I like hunting for facts and information that are hard to find” describes them very well—41% vs. 33%. Immigrants are also more likely than the U.S. born to prefer to get information in audio and video format over text (32% vs. 23%).9 On other measures, there are no differences between immigrant Hispanics and U.S.-born Hispanics. For example, U.S.-born and foreign-born Hispanics are about equally likely to strongly agree that they get frustrated when they can’t find information they need right away (24% and 27%, respectively).

Ease of Searching for Information 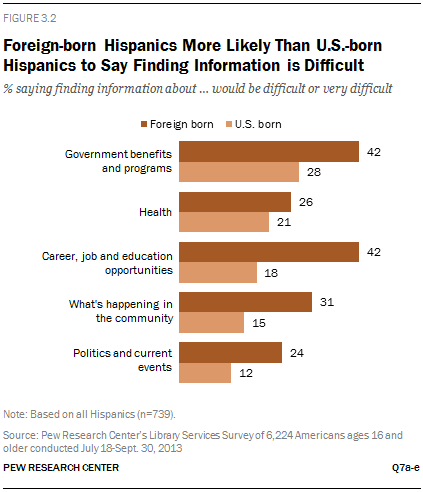 Searching for information on some topics can be easy for some and difficult for others. In the Pew Research survey, respondents were asked about how hard it would be to find information about government benefits and programs; reliable health information; career, job and education opportunities; happenings in the respondent’s community; and politics and current events.

When finding information about government benefits and programs, about one-third (35%) of Hispanics say it would be difficult or very difficult to do so. By comparison, 27% of whites and 31% of blacks say the same. And Hispanics are twice as likely to say it would be difficult to find information about career opportunities, job training or educational programs (30%, compared with just 16% of whites and 17% of blacks).

Some 18% of Hispanics say it would be difficult or very difficult to find information about politics and current events. By comparison, just 8% of whites say this, as do 12% of blacks.

Asking for Help When Searching for Information 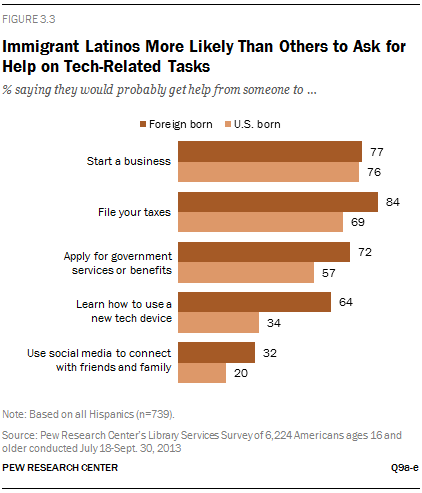 The library survey also asked respondents about how comfortable they are with doing certain tasks on their own or if they would be likely to seek help.

Just as with other questions in the library survey, there are many differences among Hispanic subgroups when it comes to asking for help. For example, foreign-born Hispanics are more likely than U.S.-born Hispanics to say they would seek help filing their taxes (84% vs. 69%, respectively) and applying for government benefits (72% vs. 57%, respectively), though at least half of both groups agree with the statements. Both immigrants and non-immigrants are about equally likely to seek help when starting a business (three-quarters of each say they would).

On technology-based tasks, the divides look different. Hispanics are as likely as whites and blacks to seek help with a new tech device such as a tablet computer or smartphone (49% of Hispanics would get help, compared with 48% of whites and 46% of blacks). And about one-in-four (26%) Hispanics say they would ask for help to use social media like Facebook or Twitter to connect with friends or family—about the same share as among whites (28%) but somewhat less than the share of blacks (34%) who would seek help.

Among Latinos, though, the gaps between the foreign born and U.S. born are even wider in these types of tasks than other information seeking tasks. For example, immigrant Latinos are about twice as likely as U.S.-born Latinos to ask for help with new tech devices (64% vs. 34%), and significantly more likely to seek someone to help them use social media (32% vs. 20%). 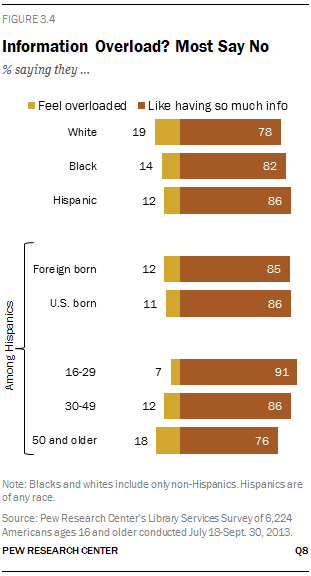 Next: References
← Prev Page
Page1Page2Page3You are reading page4Page5Page6
Next Page →

Hispanic Latino DemographicsLibraries
About One-in-Four U.S. Hispanics Have Heard of Latinx, but Just 3% Use It
Defining generations: Where Millennials end and Generation Z begins
Black voter turnout fell in 2016, even as a record number of Americans cast ballots
An examination of the 2016 electorate, based on validated voters
Public’s Mood Turns Grim; Trump Trails Biden on Most Personal Traits, Major Issues