Nearly four decades after the United States government mandated the use of the terms “Hispanic” or “Latino” to categorize Americans who trace their roots to Spanish-speaking countries, a new nationwide survey of Hispanic adults finds that these terms still haven’t been fully embraced by Hispanics themselves. A majority (51%) say they most often identify themselves by their family’s country of origin; just 24% say they prefer a pan-ethnic label.

A Conversation About Identity 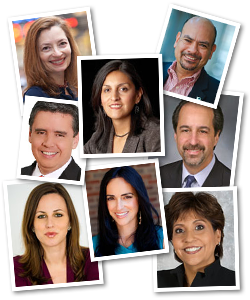 We invited journalists, scholars and civic leaders to share their views on Latino identity.

Moreover, by a ratio of more than two-to-one (69% versus 29%), survey respondents say that the more than 50 million Latinos in the U.S. have many different cultures rather than a common culture. Respondents do, however, express a strong, shared connection to the Spanish language. More than eight-in-ten (82%) Latino adults say they speak Spanish, and nearly all (95%) say it is important for future generations to continue to do so.

Hispanics are also divided over how much of a common identity they share with other Americans. About half (47%) say they consider themselves to be very different from the typical American. And just one-in-five (21%) say they use the term “American” most often to describe their identity. On these two measures, U.S.-born Hispanics (who now make up 48% of Hispanic adults in the country) express a stronger sense of affinity with other Americans and America than do immigrant Hispanics.

The survey finds that, regardless of where they were born, large majorities of Latinos say that life in the U.S. is better than in their family’s country of origin. Also, nearly nine-in-ten (87%) say it is important for immigrant Hispanics to learn English in order to succeed in the U.S.

This report explores Latinos’ attitudes about their identity; their language usage patterns; their core values; and their views about the U.S. and their families’ country of origin. It is based on findings from a national bilingual survey of 1,220 Hispanic adults conducted Nov. 9 through Dec. 7, 2011, by the Pew Hispanic Center, a project of the Pew Research Center. For a full description of the survey methodology, see Appendix A. (In this report, as in all Center reports, the terms “Hispanic” and “Latino” are used interchangeably).

Among the report’s key findings:

After a number of years of lobbying by Mexican-American and Hispanic organizations, in 1976 the U.S. Congress passed Public Law 94-311. Called the “Joint resolution relating to the publication of economic and social statistics for Americans of Spanish origin or descent” and sponsored by Rep. Edward Roybal of California, the law mandated the collection of information about U.S. residents of Mexican, Cuban, Puerto Rican, Central American, South American and other Spanish-speaking country origins (Pub. L. No. 94-311, 1976). Subsequent directives from the Office of Management and Budget (OMB) in 1977 outlined the details of data collection for the federal government. A second OMB directive in 1997 added the term “Latino” to “Hispanic” (Rumbaut, 2006).

The use of the terms “Hispanic” and “Latino” to describe Americans of Spanish origin or descent is unique to the U.S. and their meaning continue to change and evolve. Outside of the U.S., these terms are not widely used (National Research Council, 2006) and may also have different meanings.

The 2011 National Survey of Latinos (NSL) focuses on Hispanics’ identities, behaviors, views about social issues, and language use. The survey was conducted from November 9 through December 7, 2011, in all 50 states and the District of Columbia among a randomly selected, nationally representative sample of 1,220 Latino adults. The survey was conducted in both English and Spanish on cellular as well as landline telephones. The margin of error for the full sample is plus or minus 3.6 percentage points. Interviews were conducted for the Pew Hispanic Center by Social Science Research Solutions (SSRS).

“Foreign born” refers to persons born outside of the United States to parents neither of whom was a U.S. citizen. Foreign born also refers to those born in Puerto Rico. Although individuals born in Puerto Rico are U.S. citizens by birth, they are included among the foreign born because they are born into a Spanish-dominant culture and because on many points their attitudes, views and beliefs are much closer to Hispanics born abroad than to Latinos born in the 50 states or the District of Columbia, even those who identify themselves as being of Puerto Rican origin.

Next: II. Identity, Pan-Ethnicity and Race
← Prev Page
You are reading page1Page2Page3Page4Page5Page6
Next Page →

When Labels Don’t Fit: Hispanics and Their Views of Identity
I. Executive SummaryHispanics and IdentityThe American ExperienceLanguage Use—English and SpanishSocial and Political AttitudesAbout this ReportA Note on TerminologyA Conversation About IdentityOfficial Adoption of the Terms “Hispanic” and “Latino”
II. Identity, Pan-Ethnicity and Race III. The American Experience IV. Language Use among Latinos V. Politics, Values and Religion Appendix A: 2011 National Survey of Latinos Survey Methodology