Men experienced greater setbacks in the recession, losing twice as many jobs as women from the fourth quarter of 2007 to the fourth quarter of 2009. In the recovery, however, men have gained four times as many jobs as women. The weakness of the recovery for women is underscored by the fact that they represent the only group among those examined in this report for whom employment growth lagged behind population growth from 2009 to 2011. 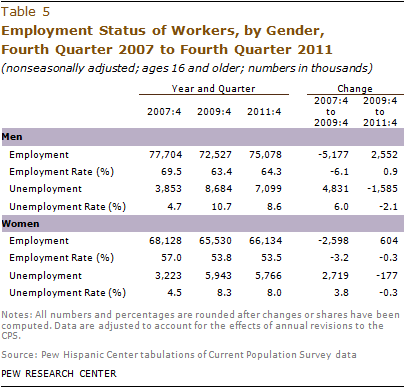 Employment for men increased from 72.5 million in the fourth quarter of 2009 to 75.1 million in the fourth quarter of 2011, a gain of 2.6 million jobs. The jobs recovery was strong enough to push the unemployment rate for men down from 10.7% in 2009 to 8.6% in 2011. But men had lost 5.2 million jobs in the recession, and their employment level remains 2.6 million below its pre-recession level.

Next: V. The Shortfall in the Employment Level
← Prev Page
Page1Page2Page3You are reading page4Page5Page6Page7
Next Page →