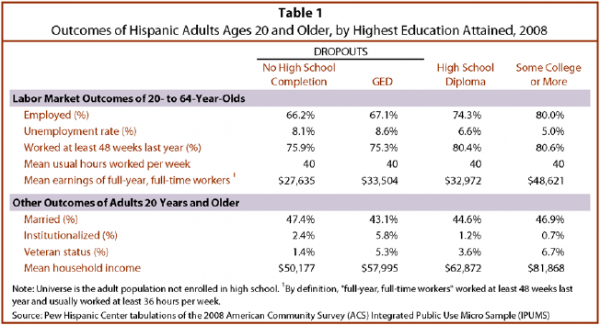 This is a surprising pay finding. The typical GED recipient has finished around 10 years of formal schooling (Clark and Jaeger, 2006), two years less schooling than high school graduates. GED examinees do invest time to prepare and pass the tests. The median GED examinee devotes 30 hours to test preparation. But in each year of high school, a student devotes 410 hours to core curriculum classes, so the typical GED holder has not invested as much time in his or her education as a high school graduate (Boesel, Alsalam, and Smith, 1998). 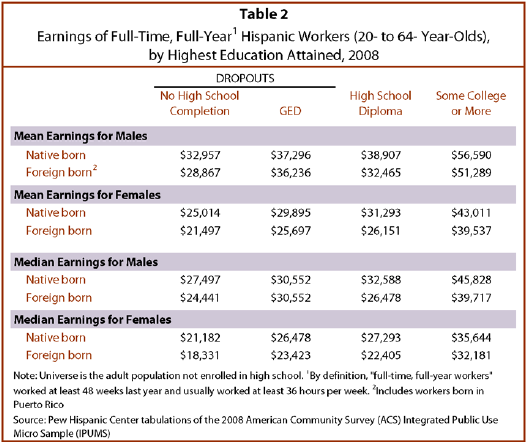 The earnings payoff to Hispanic male immigrants for having a GED rather than a high school diploma may be due to a number of factors. The male GED holders are about 2.5 years older, on average, than the male high school graduates, and they are less likely to have recently arrived in the United States. Also, although English proficiency is not a prerequisite for passing the GED tests, immigrant male GED holders are more likely than immigrant male high school graduates to be fluent in English. Fluent English speakers are paid more in the U.S. labor market (Bleakley and Chinn, 2003).

However, it is possible that GEDs have a signaling value for male immigrants. Most of the immigrants arrived in the U.S. as adults, and those who are high school graduates received their diplomas from foreign secondary schools. Employers may have difficulty evaluating workers with foreign credentials. Immigrants with GEDs may be compensated for possessing a more familiar credential.

Standard regression analysis on immigrant male earnings reveals that the GED holders are more highly paid than high school graduates even after controlling for the differences in observable characteristics. Since these data omit some important worker characteristics, however, we can conclude only that, among Hispanic male immigrants, GEDs are associated with higher earnings compared with high school graduates.2

Hispanics whose highest education is a GED are much more likely to be currently incarcerated than are other Hispanic adults (Table 1).4 This partly reflect the fact that correctional facilities widely provide GED preparation and testing to inmates. Though less than 1% of the population is incarcerated, more than 10% of GEDs each year are awarded by correctional facilities (Heckman and LaFontaine, 2007).

Next: IV. How Many Dropouts?
← Prev Page
Page1Page2You are reading page3Page4Page5Page6Page7Page8
Next Page →