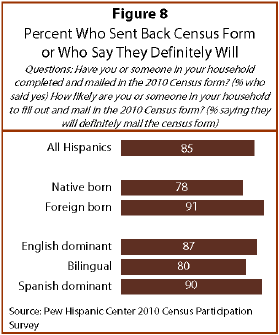 A large majority (85%) of Hispanics say they have already sent in their 2010 Census form or definitely will do so. This expressed intention to participate among Latinos is up from the 65% who said they definitely will participate in the census in a Pew Research survey in early March and the 47% who said the same in January (Pew Research Center for the People and the Press, March 2010). 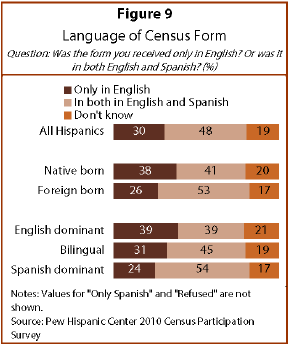 This year for the first time, the Census Bureau sent out forms with questions in both English and Spanish to parts of the nation with high concentrations of Spanish speakers.3 Bilingual forms also are available upon request by calling a toll-free telephone number, and are provided at questionnaire assistance centers around the country. Nearly half (48%) of all Hispanics who have received a 2010 Census form say that it is in English and Spanish, while three-in-ten (30%) say they have received a form that is only in English. Receipt of a bilingual form was more prevalent among foreign-born Latinos than native-born Latinos. More than half (53%) of immigrant Latinos who received a form say it was in two languages. Among those who are Spanish dominant, more than half (54%) say they received a bilingual form.

Latinos and the 2010 Census: The Foreign Born Are More Positive II. The 2010 Census and the Hispanic Community III. Knowledge and Trust
IV. Participation in the Census
V. Media and Group Outreach Messages Appendix A: Survey Methodology