The Pew Hispanic survey asked Hispanics what they know about the census and its uses. It also asked Hispanics about the confidentiality of the information provided on the 2010 Census form. Overall, Hispanics are just as likely as the general public to be knowledgeable about the uses of the census. Yet, among Hispanics, the foreign born are more likely than the native born to know how the census can and cannot be used. 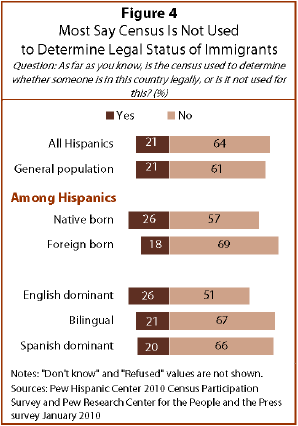 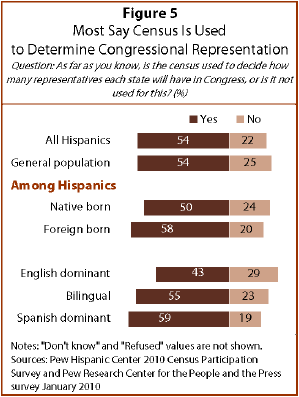 When asked if the census is used for determining congressional representation, more than half (54%) of Latinos correctly say it is used for this purpose—identical to the share of the general public that answers this question correctly (Pew Research Center for the People and the Press, March 2010). However, there are differences on this question among Latinos. Nearly six-in-ten (59%) Spanish-dominant Hispanics and 55% of bilingual Hispanics answer this question correctly, compared with 43% of English-dominant Hispanics. 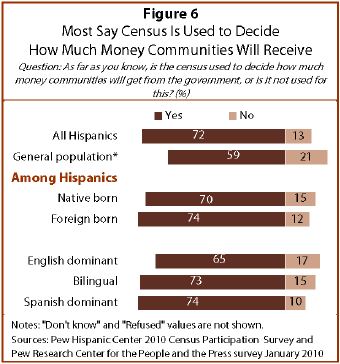 When asked if the census can be used to decide how much money communities receive from the federal government, Hispanics are more likely than the general public to say this is true. More than seven-in-ten (72%) Hispanics correctly say this, while 59% of the general public said the same in January 2010 (Pew Research Center for the People and the Press, January 2010). Note, however, that the general public survey was taken in January, before the Census Bureau’s public information campaign was in full swing. It is possible that the share of the public that can answer this question correctly has risen since then.

Trust in the Census Bureau to Keep Personal Information Confidential 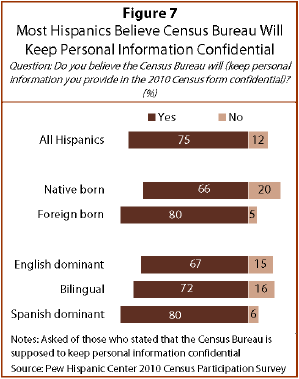 More than eight-in-ten (81%) Latinos correctly say the Census Bureau is supposed to keep personal information confidential, 10% say it isn’t supposed to do this and 10% say they don’t know.

Not all Latinos trust the Census Bureau to keep information confidential. Even among those who know the agency is supposed to do this, three-in-four (75%) say they believe it actually will. Among this group, foreign-born Hispanics are more likely than the native born to say they trust the Census Bureau to keep personal information confidential—80% versus 66%. And greater shares of Spanish-dominant Hispanics (80%) and bilingual Hispanics (72%) say this than do English-dominant Hispanics (67%).

Next: IV. Participation in the Census
← Prev Page
Page1Page2You are reading page3Page4Page5Page6
Next Page →

Latinos and the 2010 Census: The Foreign Born Are More Positive II. The 2010 Census and the Hispanic Community
III. Knowledge and Trust
Using the Census to Determine Legal StatusCongressional Representation and Government MoneyTrust in the Census Bureau to Keep Personal Information Confidential
IV. Participation in the Census V. Media and Group Outreach Messages Appendix A: Survey Methodology