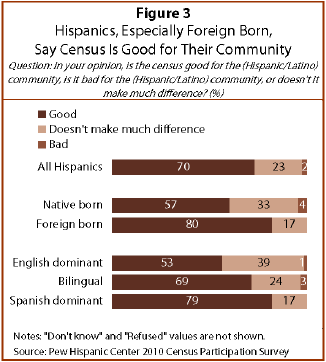 Views of the census are more positive among foreign-born Latinos than native-born Hispanics. Fully 80% of immigrant Hispanics says the census is good for the Hispanic community, while 57% of the native born hold the same opinion.

Next: III. Knowledge and Trust
← Prev Page
Page1You are reading page2Page3Page4Page5Page6
Next Page →

Latinos and Education: Explaining the Attainment Gap
Public Libraries and Hispanics
When Labels Don’t Fit: Hispanics and Their Views of Identity