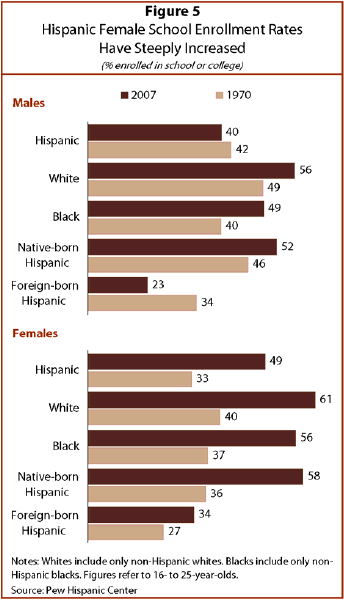 Hispanic youths are increasingly acquiring marketable skills, and a primary avenue is through increased school enrollment (Figure 5). Similar to white and black youths, many more Hispanic youths are enrolled in school or college in 2007 than in 1970. 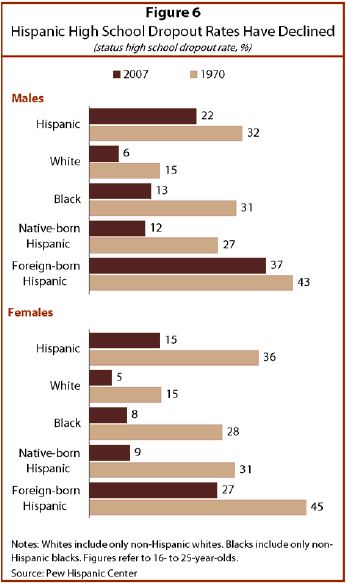 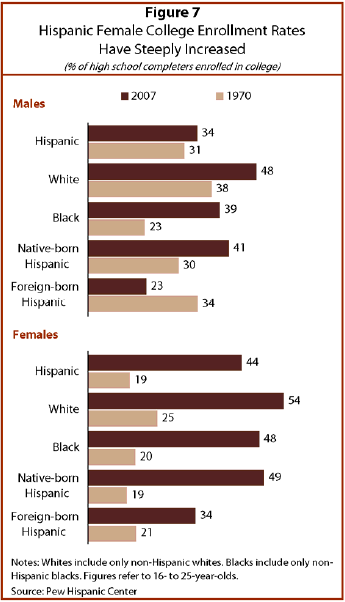 Social scientists have noted the gender revolution that has taken place on the nation’s college campuses. Since 1947, college enrollment has grown increasingly female (Goldin, Katz, and Kuziemko, 2006). Young Latino women have fully participated in this higher education revolution. In 1970, only 19% of female Hispanic high school completers were enrolled in college (Figure 7). By 2007, 44% of young female Hispanics with a high school education were enrolled in college. Among native-born female Latinos who have finished high school, almost half (49%) were enrolled in college in 2007. The college enrollment rates of young Hispanic men have increased (from 31% of high school completers in 1970 to 34% of in 2007), but the gains have not been on the order of magnitude achieved by Hispanic females.

Undergraduate enrollment figures compiled by the U.S. Department of Education dramatize the strides made by young Hispanic females relative to young Hispanic males. Hispanic male undergraduate enrollment has risen fourfold, from about 190,000 in 1976 to 800,000 in 2007 (National Center for Education Statistics, 2009). Hispanic female undergrad enrollment has risen sevenfold over that period, from 160,000 students to more than 1.1 million.7 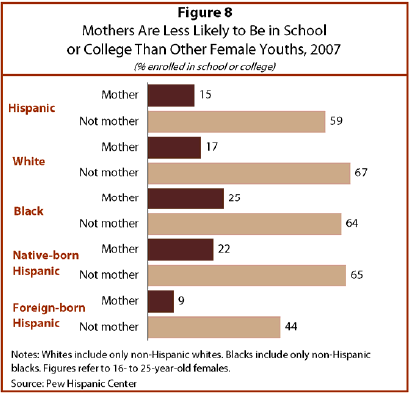 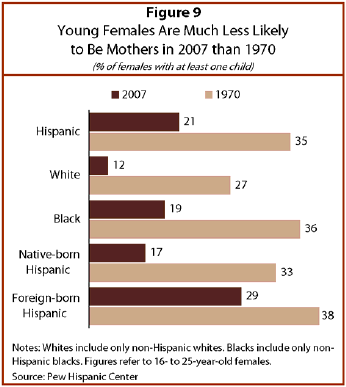 Similar to other young women, Hispanic females in 2007 are much less likely to be a parent than in 1970. In 1970, more than a third of young Hispanic women had at least one child of her own in her household. By 2007, the rate of motherhood was only one-in-five among young female Latinos (Figure 9).8 The very significant decline in parenting responsibilities would be expected to strongly discourage school leaving and increase college-going (Ahituv and Tienda, 2004).