For this survey, ICR maintained a staff of Spanish-speaking interviewers who, when contacting a household, were able to offer respondents the option of completing the survey in Spanish or in English. A total of 710 respondents were surveyed in English and 1,248 respondents were interviewed in Spanish (and the remaining 57 were surveyed equally in both languages). Any adult male or female of Latino origin or descent was eligible to complete the survey.

Because a growing number of Hispanic households in the U.S. are reachable only by cell phone, the study included interviews from both landline (n=1,254) and cell phone (n=761) sample frames. According to government statistics from the National Health Interview Survey (NHIS) during the last six months of 2007, 19.3% of Hispanic adults were reachable only by cell phone, a number that was 4 percentage points higher than it had been one year earlier. Adults who are cell-only are very different demographically from those reachable on a landline. In particular, they tend to be younger, less likely to be married or have children, or to own a home.

Both sample frames were stratified via a disproportionate stratified design. All telephone exchanges in the contiguous 48 states were divided into groups, or strata, based on their concentration of Latino households. For the landline frame, the sample was also run against InfoUSA and other listed databases, and then scrubbed against known Latino surnames. Any “hits” were subdivided into a “surname” stratum, with all other sample being put into other “RDD” strata. Overall, then, the study employed eight strata: 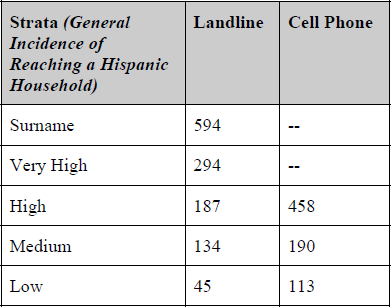 A four-stage weighting design was used to ensure an accurate representation of the national Hispanic population. First, an adjustment was made for all people found to possess both a landline and a cell phone, as they were twice as likely to be sampled as were respondents who possessed only one phone type. The sample was then corrected for the disproportionality of the stratification scheme described earlier. Third, the sample was corrected to reflect the percentage that is cell-only, landline-only or reachable by either a landline or a cell phone. NHIS and Pew Research Center data were used to project percentages that the Pew Research Center felt were appropriate for the 2007 population.