This section offers a summary of recent enforcement activities at the federal and state level aimed at combating illegal immigration. It is based on government data rather than on the findings of the 2007 National Survey of Latinos. 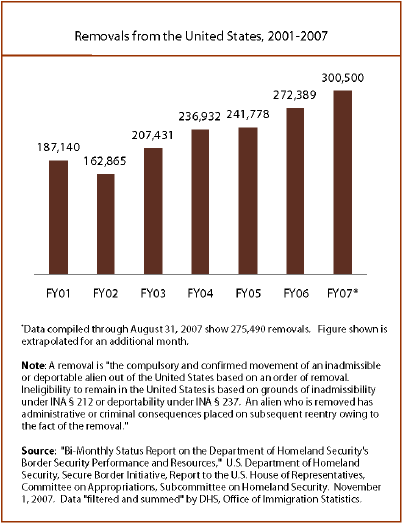 The Department of Homeland Security uses the term “removal” rather than “deportation” to describe the actions of its Immigration and Customs Enforcement (ICE) and Customs and Border Protection (CBP) divisions. In fiscal year 2007, there were slightly more than 300,000 removals of illegal immigrants from the U.S., an 84% increase since 2002. About one-third occur at the Southwestern border, after an immigrant is apprehended trying to enter the country illegally. 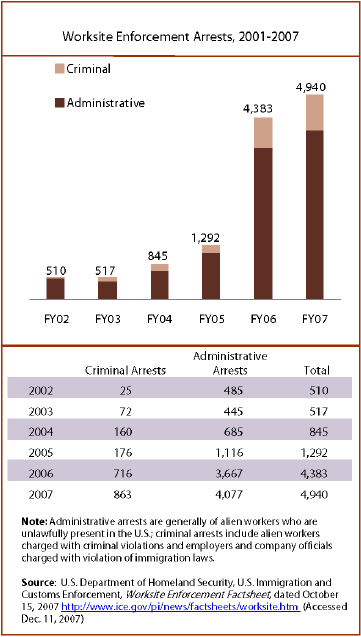 An increase in worksite raids around the country by ICE has led to a nearly ten-fold rise since 2002 in the number of undocumented immigrants arrested at their workplace—from about 500 in 2002 to about 5,000 in 2007. (The Pew Hispanic Center estimates that 7 million to 8 million undocumented immigrants are in the U.S. workforce). ICE has also announced a new policy that would punish employers who fail to verify their workers’ Social Security information. However, the implementation of this new policy has been delayed as a result of lawsuits filed by the American Civil Liberties Union and the U.S. Chamber of Commerce. If implemented, the electronic verification system and “no-match” regulations could have a substantial impact on unauthorized migrants attempting to work in the U.S.

As of November 16, 2007, a total of 1,562 bills and resolutions related to immigrants and immigration had been introduced in the 50 state legislatures this year, and 244 had been enacted, according to the National Conference of State Legislatures. These figures are almost triple the number of immigration bills introduced and enacted in 2006. The measures cover a wide range of policy areas, including health, education, employment, law enforcement, legal services, drivers’ licenses and public benefits. Many (but not all) seek either to step up enforcement against, or deny benefits to, illegal immigrants. 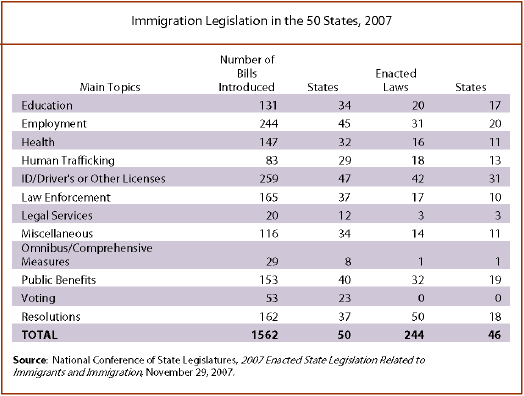 A Stateline.org3 review of the legislative measures enacted at the state level in 2007 shows that laws restricting the rights or benefits of illegal immigrants outnumber laws benefiting them by about a two-to-one ratio, although roughly half did not deal specifically with illegal immigration. This year’s legislative activity leaves a patchwork of state polices across the country. For example, Stateline has found:

Next: III. Quality of Life for Latinos
← Prev Page
Page1You are reading page2Page3Page4Page5Page6Page7
Next Page →