For this survey, ICR maintained a staff of Spanish-speaking interviewers who, when contacting a household, were able to offer respondents the option of completing the survey in Spanish or in English. A total of 655 respondents were surveyed in English and 1,315 respondents were interviewed in Spanish (and another 33 equally in both languages). Any adult male or female of Latino origin or descent was eligible to complete the survey.

Because a growing number of Hispanic households in the U.S. are reachable only by cell phone, the study included interviews from both landline (n=1,101) and cell phone (n=902) sample frames. According to government statistics from the National Health Interview Survey (NHIS) during the last six months of 2006, 15.3% of Hispanic adults lived in households reachable only by cell phone, a number that was nearly four percentage points higher than it had been in the previous six months. Adults who are cell-only are very different demographically from those reachable on a landline. In particular, they tend to be younger, less likely to be married or have children, or to own a home.

Both sample frames were stratified via a disproportionate stratified design. All telephone exchanges in the contiguous 48 states were divided into groups, or strata, based on their concentration of Latino households. For the landline frame, the sample was also run against InfoUSA and other listed databases, and then scrubbed against known Latino surnames. Any “hits” were subdivided into a ‘surname’ stratum, with all other sample being put into other ‘RDD’ strata. Overall, then the study employed 8 strata: 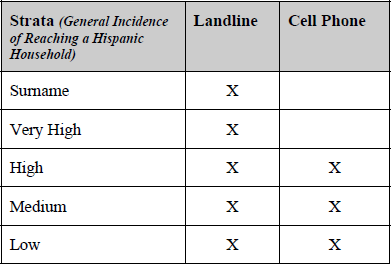 It is important to note that the existence of a surname stratum does not mean this was a surname sample design. The sample is random digit dial (RDD), with the randomly-selected telephone numbers divided by whether they were found to be associated with or without a Latino surname. This was done simply to increase the number of strata and thereby increase the ability to meet ethnic targets and ease administration by allowing for more effective assignment of interviewers and labor hours.

A four-stage weighting design was used to ensure an accurate representation of the national Hispanic population. First, an adjustment was made for all persons found to possess both a landline and a cell phone, as they were twice as likely to be sampled as were respondents who possessed only one phone type. The sample was then corrected for the disproportionality of the stratification scheme described earlier. Third, the sample was corrected to reflect the percentage that is cell-only (17%), landline-only (34%), or reachable by either a landline or a cell phone (49%). A Pew Research Center extrapolation of NHIS data was used to estimate the current percentages. (On December 10, just prior to the release of this report, the government issued an updated estimate on telephone status from the NHIS. It estimates that between January and June 2007, 18% of Hispanic adults were reachable only by cell phone.)

2007 National Survey of Latinos: As Illegal Immigration Issue Heats Up, Hispanics Feel a Chill II. By the Numbers: Trends in Enforcement III. Quality of Life for Latinos IV. The Immigration Debate V. Views About Immigrants IV. Perceptions of Discrimination
Appendix A: Survey Methodology