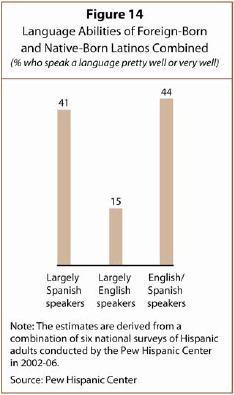 This section looks at the 44% of all Latino adults, both foreign born and native born, who are comfortable talking in both English and Spanish, meaning that they report speaking each language pretty well or very well. They outnumber the 41% of Hispanic adults who speak mainly Spanish, as well as the 15% who describe themselves as largely English speakers. (Figure 14)

Among Latino immigrants, about a third (34%) say they speak both English and Spanish pretty well or very well. About 2% of immigrants are largely English speakers, although they may also have Spanish skills. The remaining 64% speak largely Spanish.

Foreign-born Hispanics who arrived at ages 10 and younger are most likely to be comfortable speaking both Spanish and English: 77% say they are bilingual. 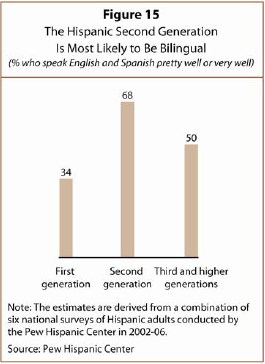 Among all Latinos, the most highly educated are most likely to speak both English and Spanish. Just over half (53%) of high school graduates report being bilingual, as do 69% of college graduates. But only 29% of adult Hispanics who did not complete high school are comfortable speaking both Spanish and English.