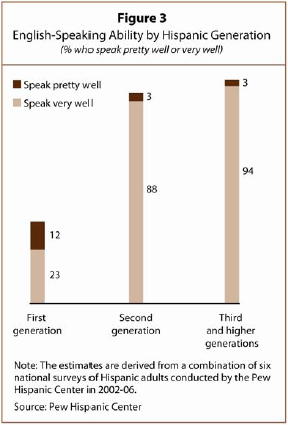 There are striking generational differences among Latinos, especially between those born outside the U.S. and their U.S.-born children, in the ability to speak or read English. Spanish is the pervasive language of the first generation of adult Hispanics, those born outside the U.S. Their U.S.-born children, the second generation, are comfortable with both English and Spanish but much more likely to speak English at home and at work. By the third and later generations, children of U.S.-born parents, English use is universal and although many know how to speak Spanish, they do not often do so.

Among the first generation of Latino adults, most say they speak little or no English, and only 23% report that they speak the language very well. An additional 12% say they speak English pretty well. By the second generation, 88% report speaking English very well and 3% speak pretty well, and by later generations the proportions are 94% and 3% respectively. (Figure 3) 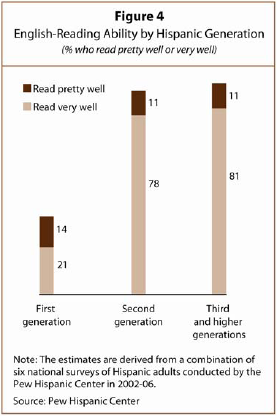 Both native- and foreign-born adult Hispanics report lower reading skills than speaking skills in Spanish. Six-in-ten first-generation Latinos say they can read a newspaper or book in Spanish very well. That share drops to 39% in the second generation and 16% in later generations. Most members of the third and higher generations report very little or no reading ability in Spanish.

Spanish is the language that most foreign-born Hispanic adults (52%) speak exclusively at home. That proportion drops to 11% among second-generation adults and 6% among those in the third and higher generations.