Findings from the NAEP

The 2005 NAEP results on ELL academic performance are available at the state level for 39 states in math and 34 states in reading. The same broad findings on the size and persistence of the achievement gap reported above for the national data are evident in these states to varying degrees. 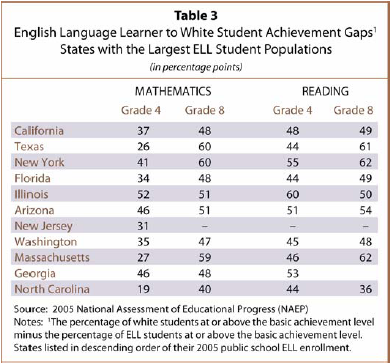 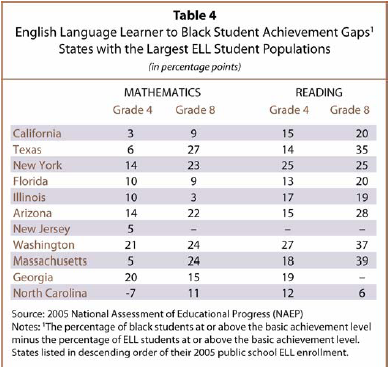 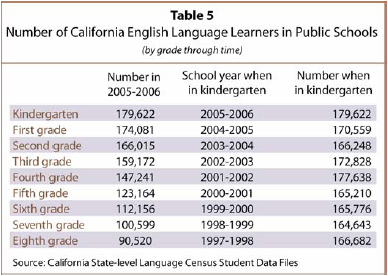 As with the national data, evidence from the states suggests that the decline in ELL performance from elementary school to middle school likely reflects change in the ELL population across grades. Administrative counts at the state level make clear that the ELL population decreases in size at higher grades. For example the state of California has detailed counts on ELL students over time. The second column of Table 5 reports the number of ELL students in each grade in school year 2005-06 in California public schools. Using prior school year data, the fourth column reports the number of ELL students when that grade was in kindergarten.

In California the number of ELL students rises from kindergarten to first grade. After the second grade the number of ELL students decreases and it continues to decrease each grade thereafter. Similar patterns of ELL counts by grade were apparent in the states of Florida, Illinois, and Arizona (see the Appendix). The ELL student population is smaller in middle school than in early elementary school. Students learning English most rapidly were the students who departed the ELL population. It seems plausible that these students were the highest achieving ELL students. Their performance is not reflected in the middle school ELL results, widening the measured gap between white and ELL students.

The No Child Left Behind Act requires states to test students annually in reading and math in grades 3 to 8. State participation in NAEP is not a substitute for the state’s own assessment of all students, so states have developed their own standards-based reading and mathematics assessments. Because each state assessment is unique, results on states assessments cannot be compared across states to measure student achievement. Analysis has shown that the state tests vary widely across states and that the meaning of “proficient” differs between states. In short, “to compare scores between states, one must rely on NAEP (McLauglin, 2005).”

However, on the basis of each states’ reading and mathematics assessment, it is possible to compare how ELL students performed in that state compared to white students in that state. In each state, the percentage of ELL students that “meets or exceeds the state standard” can be compared to the percentage of white students that meet or exceed the state standard and the gap in performance can be measured.

Using the most recent year available for the state assessment results, the gap between white and ELL test-takers was tabulated in the percent of students meeting or exceeding the state standard (see the Appendix for the measured gaps).

The ELL-to-white performance gaps based on the state assessments largely mirror the gaps based on state NAEP. In both math and reading, and regardless of grade, ELL students trail their white counterparts in the percent of students meeting or exceeding the state standard. The state-based gaps were typically in the double digits and tend to widen as the grade level progresses.

For example, in the 2005 NAEP in Arizona, 86% of white test-takers were at or above the basic level of achievement compared with 40% of ELL test-takers in grade 4 math. That produced a NAEP-based gap of 46 points (Table 3). Results of Arizona’s Instrument to Measure Standards (AIMS) in 2006 indicated that 85% of white fourth graders “meets or exceeds the standard” in math, compared to 42% of ELL fourth graders, resulting in a 43 point AIMS based gap between white and ELL fourth graders in math in Arizona. States with larger NAEP-based gaps also show larger gaps based on their own state assessment (Appendix figures A1-A4).

Next: Appendix: Tables and Figures
← Prev Page
Page1Page2Page3You are reading page4Page5
Next Page →