In order to fully represent the opinions of Mexico-born Americans living in the United States, ICR conducted interviews with a statistically representative sample of Mexicans so that they could be examined nationally, as well as in target regions of high Mexican concentration.

For this survey, ICR maintained a staff of Spanish-speaking interviewers whom, when contacting a household, were able to offer respondents the option of completing the survey in Spanish or in English. Of the total Mexican interviews, 96% were conducted predominantly in Spanish.

The survey was administered to any male or female age 18 and older that is of Mexican origin or descent.

The field period for this study was January 16 through February 6, 2006. The interviewing was conducted by ICR/International Communications Research in Media, PA. All interviews were conducted using the Computer Assisted Telephone Interviewing (CATI) system. The CATI system ensured that questions followed logical skip patterns and that the listed attributes automatically rotated, eliminating “question position” bias.

The data was weighted by first using a preweight to correct for the disproportionality across strata. This brought the complete back into proper proportions by region state, and telephone exchange. Then, post-stratification weights were used to weight by age, gender, and education.

The overall response rate for this study was calculated to be 56.6% using AAPOR’s RR3 formula. 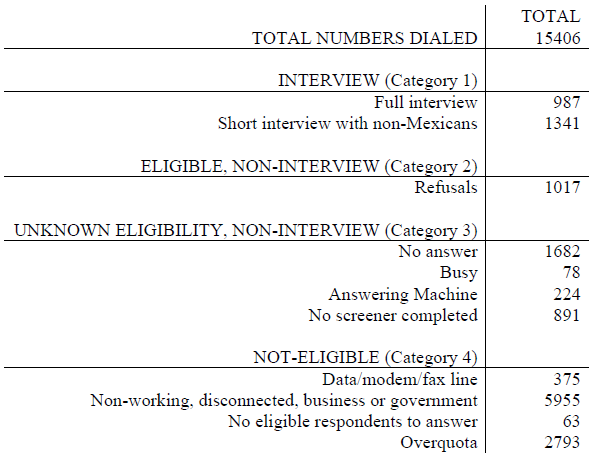