Recent arrivals with interrupted education abroad have characteristics different from other foreign-born youths. These differences likely explain some of the very high dropout rate among recent arrivals who had schooling problems before migration. The characteristics of youths with schooling difficulties before migration are also consistent with the view that many of these youths are labor migrants, i.e., they migrated with the intention of pursuing employment in the United States and have never attended school here. Recent arrivals with interrupted schooling abroad tend to be slightly older and also arrived in the United States at an older age (Table 5). More than 60 percent do not reside with a parent. They tend to be more likely to reside in poverty, and more than 10 percent were or are married.

Partly by definition, recent arrivals with schooling problems before migration also are much farther behind in school than other foreign-born youths. Consider, for example, 16-yearolds. Among other foreign-born 16-year-olds, 90 percent have finished ninth grade. Among recently arrived 16-year-olds with interrupted education abroad, only 16 percent have completed ninth grade and nearly a quarter have not completed fifth grade. 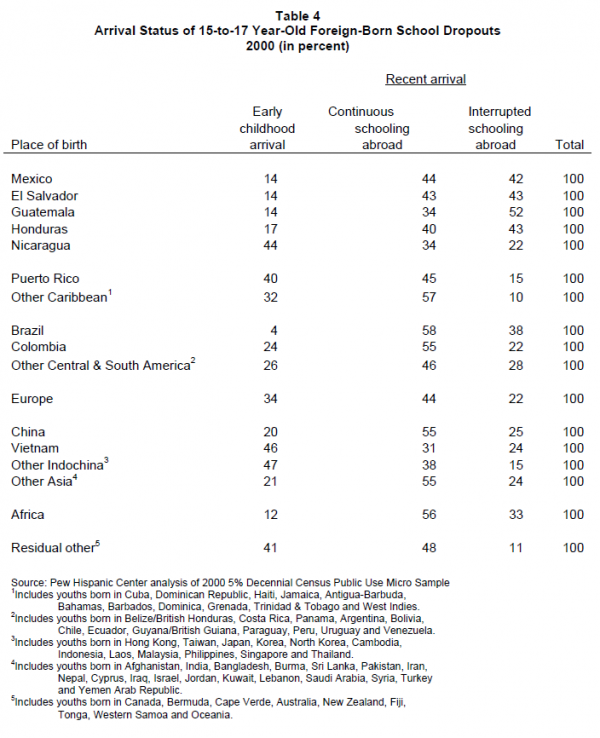 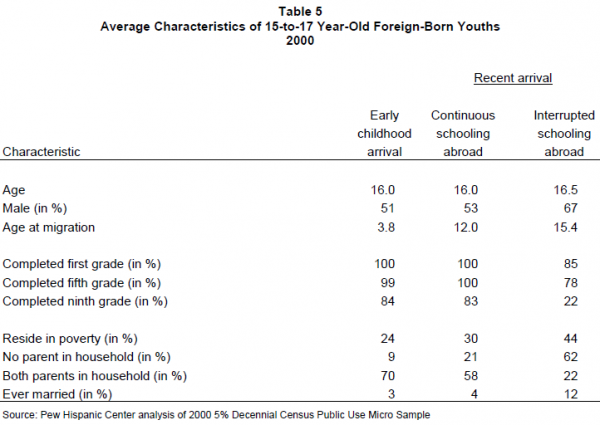 The labor market evidence supporting the assertion that many of the recent arrivals with prior schooling difficulties are labor migrants is strongest for males. The Census only collects labor market information on persons 16 years of age and older. Among male 16- and 17-yearolds, those recently arrived with prior schooling difficulties are much more likely to be employed than other foreign-born males (Table 7). More than half of them were employed at the Census enumeration, in comparison with less than a quarter of other foreign-born 16- to-17-year-old males. They also reported much higher labor earnings in 1999 than their peers. The estimated mean wage income for recently arrived males with education difficulties before migration was $11,070, compared with $7,031 for recent arrivals with continuous schooling abroad and $4,644 for early childhood arrivals. 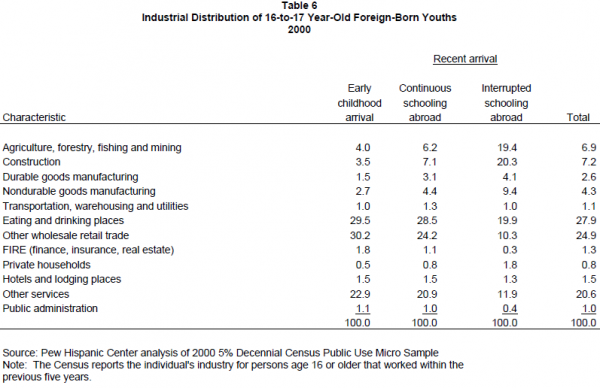 The evidence of strong labor market engagement is less persuasive among recently arrived females with schooling difficulties before migration. While they are more likely to be working than other immigrant females, their employment levels are not above average. Many high school age youths work, and they work during the school year. In 2000, 33 percent of native-born 16- and 17-year-old females were employed, in comparison with 23 percent of recently arrived females who had schooling difficulties before migration. One indicator consonant with the labor migrant hypothesis among the females is the average hours worked per week. Those recently arrived females with interrupted schooling abroad who worked during 1999 averaged nearly 36-hour workweeks, substantially above other foreign-born 16- and 17- year-old female workers whose workweeks were much closer to 20 hours.

Motherhood among Recently Arrived Females with Prior Education Difficulties

How much of the inordinate dropout rate of recently arrived females with prior schooling difficulties is due to teen fertility and motherhood? Clearly, motherhood cannot be the primary cause of these females’ being out of school: The number of teens who are mothers is far too small. Almost 65 percent of this female population is out of school. Yet only 7 percent of such recently arrived females are mothers. This is also apparent in the much larger native-born female teen population, where motherhood cannot be the primary explanation of female dropout behavior either because it is not sufficiently pervasive (Ahituv and Tienda, 2004). This is not to say that motherhood has nothing to do with dropping out in this population. Nearly all the recently arrived women with prior education difficulties who are mothers are also out of school. But there are far too few mothers to explain the very high dropout rate in this population.

Economic pressures and the necessity to work are likely more important correlates of nonenrollment in school for these females. Not all of these female youths are out of school. Of those in school, 11 percent are working. Among the dropouts, almost 30 percent are working, and again, they are working nearly full time. Thus, their work likely contributes to their lack of school engagement.