The National Center for Education Statistics has been collecting fall enrollment data since at least 1966 as part of the IPEDS and its predecessor, the Higher Education General Information Survey. In 1996 the NCES changed the reporting universe from higher education institutions as defined by accreditation status to postsecondary institutions participating in Title IV programs (NCES, 1998). Comparable data on fall enrollment are therefore not available before 1996.

Some of the key findings reported in the text are based on first-time, full-time enrollment by type of institution in California, New York, Arizona, New Jersey, Florida, Texas and Illinois. The table below reports fall 1996 enrollment, fall 2001 enrollment, and the change in enrollment in these states. 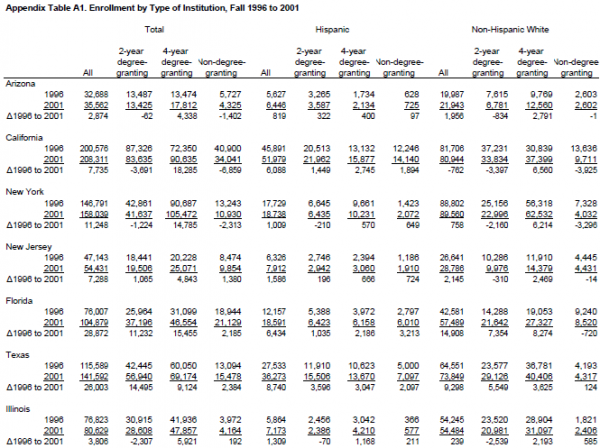 Next: Appendix B: Data Tables
← Prev Page
Page1Page2Page3Page4Page5You are reading page6Page7
Next Page →

Recent Changes in the Entry of Hispanic and White Youth into College II. Introduction III. Changes in the Nature of College-Going in States with Large Hispanic Populations IV. Consequences for the Relative Fortunes of Latino Youth V. Conclusions
Appendix A: Data Source
Appendix B: Data Tables