The preceding sections have made clear that newly arrived immigrants played a major role in the growth of the labor force and the number employed in 2004. It was also shown that Hispanic workers, the majority of whom are foreign-born, are grouped into relatively low-skill occupations with limited education requirements. But what specifically are these occupations? Are immigrants concentrated in niche occupations that are not populated by the native born? Using annual data for 2004, this section probes these questions by looking at the employment of foreign-born Hispanic workers in finely detailed occupations. It is shown that Latino immigrants alone account for nearly 40 percent or more of workers in several occupations. However, the occupations with high concentrations of foreign-born Latino workers are generally not significant sources of jobs for native-born workers.

Signs of concentration among foreign-born Latinos are evident even in their distribution across broadly defined industries and occupations. Nearly 55 percent of immigrant Hispanic workers were employed in just four industries in 2004—construction, wholesale and retail trade, professional and other business services, and eating, drinking and lodging services. In contrast, these same four industries employed 40 percent of all native-born workers (see Table 6). The most important industry for immigrant Latinos is construction. In 2004, 17 percent of foreignborn Hispanics worked in construction in comparison with only 7.2 percent of native-born workers.11

The concentration of Latino immigrants in certain occupations suggests that they may be filling demand in niche occupations that engage few other workers. This issue is explored further in two ways in Table 7 below. The Census Bureau, when collecting labor force data in the Current Population Survey, classifies the work people do at their jobs into approximately 500 detailed occupations. One indication of the demand for Hispanic immigrants is their share of employment in any one of those detailed occupations. The labor market employed 9.8 million Latino immigrants in 2004. That amounted to 7 percent of the total employment of 139.5 million.12 Thus, an occupational niche for Hispanic immigrants might be said to exist if their share in the employment of an occupation was well in excess of 7 percent. An alternative approach is to simply focus on occupations that employ the highest number of immigrant Latino workers. Unusually high numbers of foreign-born workers in a few occupations would also be suggestive of high demand for them in those types of work. 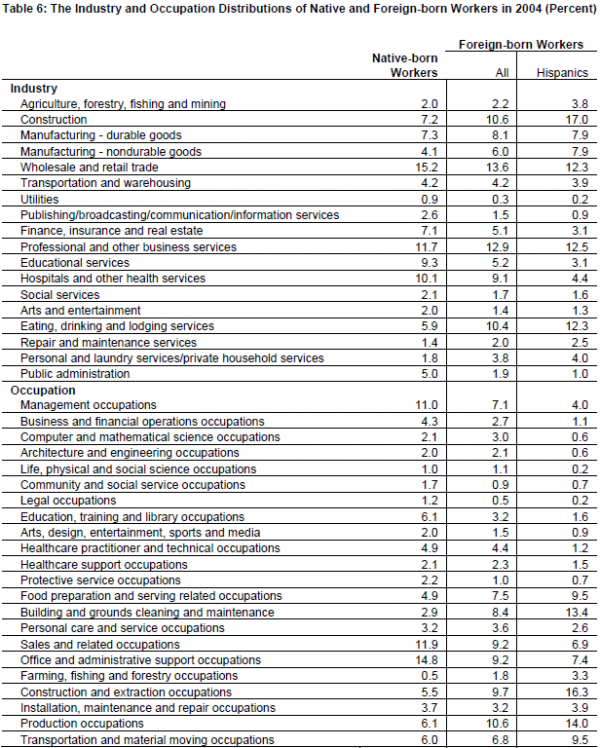 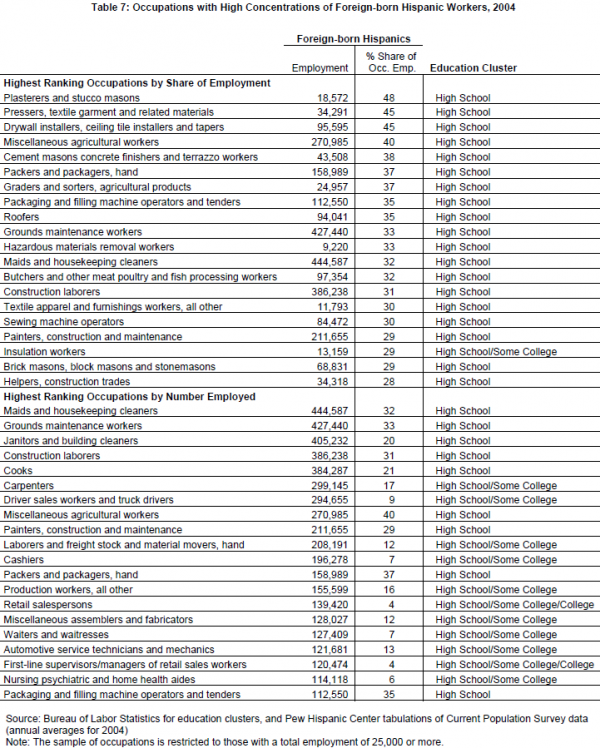 Table 7 shows the occupations with the highest concentrations of foreign-born Hispanic workers. There are two groups of occupations in the table. The first group shows the 20 occupations in which Latino immigrants held the highest share of employment in 2004.13 The data show that nearly one out of every two plasterers and stucco masons is a foreign-born Latino. Latino immigrants also accounted for at least 40 percent on employment in the following occupations: pressers, textile garments and related materials; drywall installers, ceiling tile installers, and tapers; and miscellaneous agricultural workers. In the lowest of the 20 occupations ranked by employment share in Table 7—helpers, construction trades—foreign-born Latinos held a 28 percent share. That is four times greater than their share of total employment in the economy.

In sum, the analysis in this section shows that Hispanic immigrants and native-born workers often satisfy demands for different types of work. Most foreign-born Latino workers are engaged in occupations with minimal training and education requirements. They also account for high shares of employment in several occupations, indicating especially high demand for them in certain lines of work. But occupations with very high concentrations of Latino immigrants are not important sources of employment for native-born workers.

Next: VIII. Wage Growth in 2004
← Prev Page
Page1Page2Page3Page4Page5Page6You are reading page7Page8Page9
Next Page →