The demand for immigrant labor remains robust and foreign-born workers were a major component of change in the labor market in 2004. Those who entered the U.S. between 2000 and 2004 were significant contributors to labor force and employment growth, especially among Hispanics. In contrast with recent years, native-born workers also shared in the job growth. Overall, growth in employment was more balanced in other respects as well. It is shown in the next section that, as in the recent past, the construction industry remains an important source of new jobs in the economy. But other industries also played a significant role in hiring Latinos and non-Latinos in 2004, a sign of stronger and more widespread economic growth.

Hispanic immigrants who arrived in the U.S. between 2000 and 2004 secured nearly 1 million new jobs in 2004. That is a significant number as it amounts to over one-third of the total growth in employment in the economy in 2004. Newly arrived immigrants also accounted for almost all of the increase in employment of Latino workers in 2004. To be more exact, the employment of newly arrived immigrants increased by 914,000 in 2004, accounting for 88 percent of the total increase in Latino employment (Table 2). These immigrants were also responsible for adding 955,000 workers to the labor force in 2004, or 97 percent of the total increase in the Hispanic labor force. The large numbers in which Latino immigrants continue to contribute to the labor force and employment suggests the presence of both ongoing immigrant flows from Latin America and strong demand for the skills they bring to the labor market. Approximately 70 percent of the Latino foreign-born workers who entered the United States since 2000 are illegal migrants and lack the authorization to work, according to Pew Hispanic Center estimates based on Current Population Survey data.8

The growth in the employment of native-born Hispanic workers was more modest than their foreign-born counterparts, adding 245,000 workers to the employment rolls. Thus, the addition of native-born Latinos to overall employment was only about one-fourth as high as the growth of newly arrived Latino immigrants. The employment of Hispanic immigrants who entered the U.S. before 2000 decreased by 125,000 workers. But, their labor force also fell by 207,000 workers at the same time and so did their working-age population—by 292,000 workers. Thus, the loss in employment among these immigrants is most likely not a sign of declining economic fortunes but a consequence of emigration, retirement or deaths. 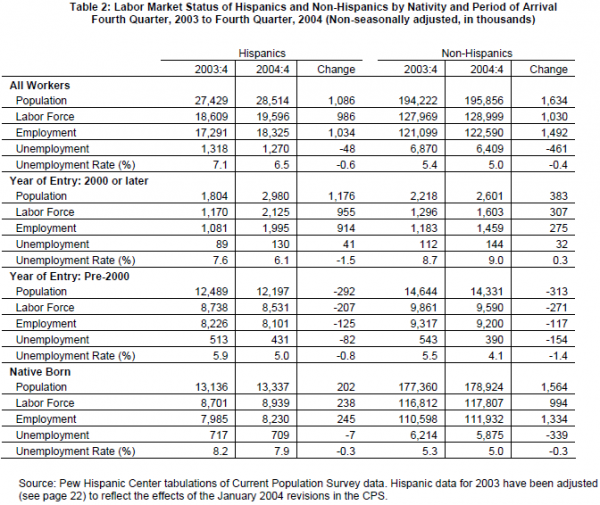 Next: V. Changes in Employment by Industry
← Prev Page
Page1Page2Page3You are reading page4Page5Page6Page7Page8Page9
Next Page →